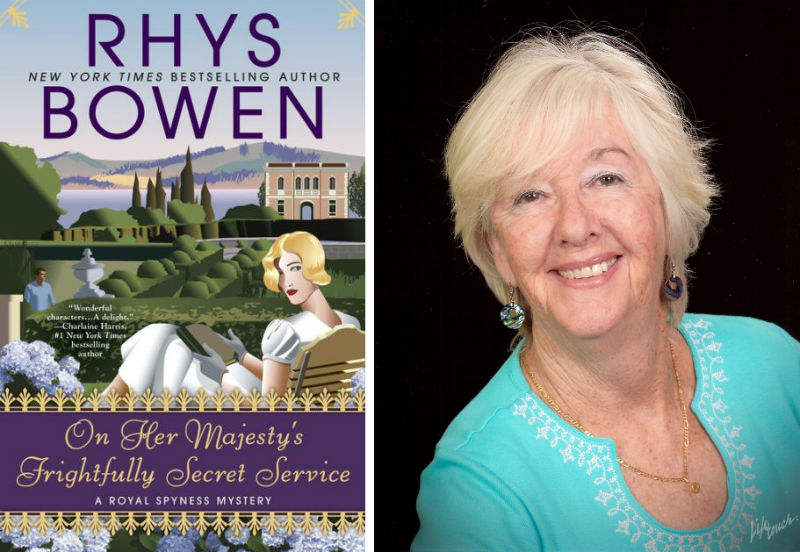 For everybody's eyes only: Rhys Bowen visits AADL to celebrate the 11th release in her Royal Spyness series.

A lot happened in 1930s Great Britain: Neville Chamberlain became prime minister of England, the economy fluctuated as it tried to recover from the world war, and Lady Victoria Georgiana Charlotte Eugenie, daughter of the Duke of Atholt and Rannoch, found herself broke and jobless forcing her to leave Scotland for London.

OK, the last part only happens in Rhys Bowen’s Royal Spyness series -- but what an amazing ride it has been for the titled but insolvent Lady Georgie.

To celebrate the release of the 11th book in the series, On Her Majesty’s Frightfully Secret Service, Bowen will appear at the downtown branch of the library on August 3 at 7 pm. The event, co-sponsored by Aunt Agatha’s, will present this New York Times bestselling author as she talks about the latest installment of her successful series.

The series is set in the 1930s pre-World War II Britain. To ensure historical accuracy, Bowen immerses herself in research. “(I do) lots of research,” she says. “Every detail has to be right even though it's fiction. I do the broad research and background reading before I start writing and then I visit the sites in person, so for this book it's Stresa in Italy … and I have a huge library of materials I draw upon.”

Fans of British period shows such as Downton Abbey will enjoy the historical setting and heroine Lady Georgie, who is 35th in line for the throne but penniless and therefore more down-to-earth than a typical royal character might be. Bowen has been writing about Lady Georgie since 2007 and while one can start reading any book in the series, Bowen suggests that one “might want to start at the beginning to see how the relationships developed ... (but) each book is complete in and of itself.”

Previous books saw Lady Georgie solving various mysteries while she works at entertaining a princess from Bavaria at the request of the queen, preventing a seduction of the Prince of Wales also at behest of the queen, representing the royals at a wedding in Transylvania again by the queen’s special request, recovering stolen property, yes, because the queen asked her to -- but as Georgie says in the book “one can’t say no to a queen." This time around, Georgie does some real spying -- on behalf of the queen, of course -- as she attends a house party in Italy. Part of her mission is to prevent a secret wedding between the Prince of Wales and Wallis Simpson but she winds up being more preoccupied with the murder of a fellow party goer.

The books are fast-paced and witty such as this exchange when someone asks Georgie if she knows the Martinis:

"You make them with gin and vermouth, I think. I don't drink cocktails very often." She shook her head. "I mean the family, not the drink."

With pluck and grace -- and loyalty to her cousin the queen -- Georgie is a delightful character.

Though she started out writing young-adult fiction, Bowen has written mystery books for decades and her awards list fills an entire page on her website. Bowen is the former regional president of Mystery Writers of America and a longtime member of Sisters in Crime and “ardent supporter of both. The mystery community is so supportive. I've made many real, deep friendships -- with my Jungle Red Writers sisters, with Louise Penny, Jacqueline Winspear. ... We keep each other sane.”

Bowen is hard at work on her forthcoming book, The Tuscan Child. She reveals, “It will be published next spring. It's two parallel stories, one in WW2 and one in 1973 and is about a British airman who crashes in Italy and what secret he left behind.”

Bowen is thrilled to be joining her friends from Aunt Agatha’s. She laughs, “The first time was me, Robin (Agnew, co-owner) and one fan! The crowd has grown since and I always love coming back!”

Rhys Bowen reads and signs "On Her Majesty’s Frightfully Secret Service" at 7 pm on Thursday, August 3, at the at the downtown branch of the Ann Arbor District Library.