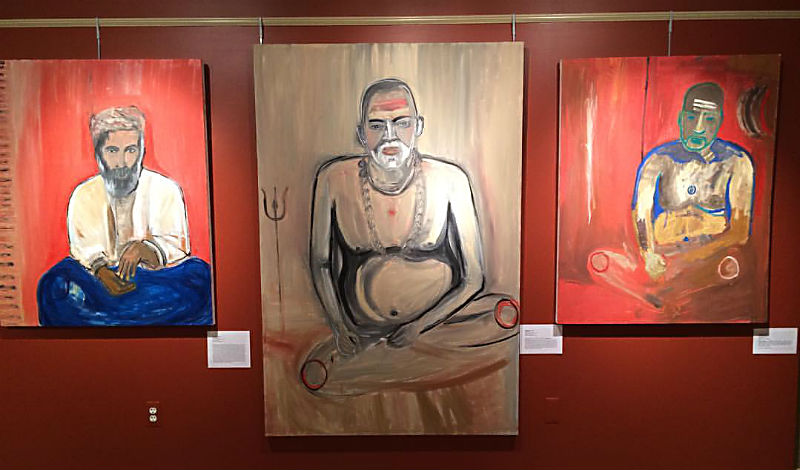 One component of the ongoing Rasa Festival can be seen through September 30 at the Riverside Arts Gallery in Ypsilanti. Riverside Arts Gallery’s lower-level space houses many large, vibrant, and gestural paintings, and geometric, mandala designs in ritualistic floor art known as rangoli, alpana, or kolam.

The show, Madhavi: Illusion’s Beer, which is a part of 2017’s Rasa Festival exhibitions, collectively focuses on the Navarasa (Nine Rasas). This can also be translated as “the nine moods,” which are various facets of Indian aesthetics. These facets include love/beauty, laughter, sorrow, anger, heroism/courage, terror/fear, disgust, surprise/wonder, and peace/tranquility.

Many of the works embody these various emotive aesthetics, ranging from the dramatic and insistent paintings by Sangchen Tsomo to the harmonic and tranquil geometry of Meena Khasnabis and Lydia Hannah. Christina Burch curated this exhibition, which includes regional and international artists.

Madhavi is defined as a “sweet intoxicating drink,” and a reference to bliss or union with the divine. Riverside Arts Gallery offers an explanation of the use of the term Madhavi, stating: “All the works in this exhibit are keys to seeing beyond the veil of illusion and entering the living experience of bliss intoxication with the divine. ... This path to Ultimate Reality is India’s most enduring legacy and greatest gift to the world.” Each artist engages with the experience of bliss in regard to the divine in varying capacities and through different means.

Meena Khasnabis, for example, practices a traditional art form from West Bengal, which she developed during her childhood in Bangalore, India. Throughout her career, Khasnabis has worked in a variety of media, including acrylic, sumi-e ink painting, watercolor, pencil, and ceramics. Her works in this exhibition are improvised mandala designs that are traditionally painted on the floor in front of houses or shrines in India, Bangladesh, and Nepal. These include motifs from nature such as the “conch shell, butterfly, lotus, or other floral designs interlaced with geometric designs around a central point.” 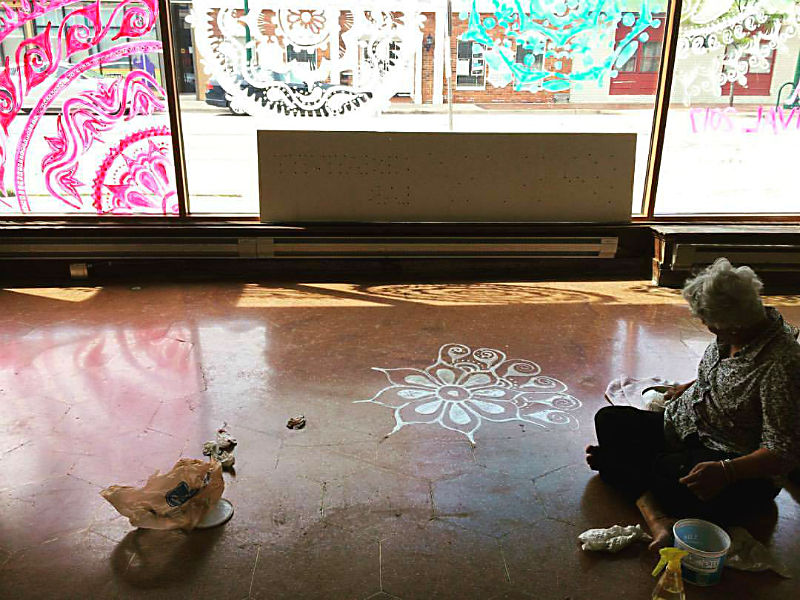 By nature, these are ephemeral works of art, made with simple materials such as rice pasta. These temporary works are implemented to “draw down blessing and invoke higher energies of the divine to dwell within one’s abode.” These ritualistic paintings are often done on a daily basis, though recently the art has expanded beyond traditional media, and are now often made with paint, colored powders, and stickers. Khasnabis’ works in the exhibit, however, are not ephemeral in the traditional sense. Each of the four works hangs on the wall, appearing almost as a tapestry rather than a floor painting. These are made on handmade lokta paper with white acrylic paint and employ the combined geometric and natural motifs typical of ritualistic painting.

Lydia Hannah’s work is focused on contemporary styles of art originating in India such as Mughal and Rajasthani miniature painting, Walri painting, ceramic paintings, and portraits, as well as works with masks, theater, and set design. In addition, Hannah works with traditional forms of the ritualistic painting: She created on-site installations for the exhibition out of colored powders, one painted directly on the floor in white, which references the motifs used by Khasnabis in her four-part series. Hannah has also included a Walri stone, “Ekagrata,” meaning “single pointed.” The stone portrays figures with joined hands, representing “harmony, balance, connection, and integration.” Hannah was born in 1990 in Karnataka, India, and is employed by Sanskriti College of Visual and Performing Arts in South Karnataka, where she works with students, incorporating art therapy into her lessons.

The third artist represented is Sangchen Tsomo, who, according to her bio in the gallery, is a “Western-born Tantric Buddhist yogini who lives in lifetime retreat in West Ann Arbor.” In addition to her accomplishments in painting, which she began in 2012, Tsomo has worked with percussion, releasing three solo drum albums. The works featured in the show are portraits depicting “God-Intoxicated Saints of India"; some are “gurus or saints who have attained complete God Realization or Enlightenment,” while other works represent “Masts, who are so intoxicated with their longing and love for the Beloved that their behavior manifests in ways which seem odd or crazy to ordinary people.” Inspired by her own path to spiritual enlightenment, Tsomo is a self-taught painter who produces “uninhibited, uncontrived, spontaneous” work “unconcerned with convention.”

Furthermore, Tsomo’s choice of oil paint as a medium places these gurus within the “figurative tradition of the Western painting,” with stylistic references to artists such as Picasso, Alice Neel, and Francis Bacon. Tsomo’s works enliven the gallery space, including vibrant palettes and gestural line work that, while they may recall the tradition of Western painting, stands their own. The stylistic approach is painterly, abstract, and sweeping, gestural lines, to varying degrees. Additionally, her works are executed on varying canvas sizes; some appear more realistic or “finished” than others, giving the impression of a diverse group of characters and aesthetic goals that align with the goals of the exhibition.