Theatrical Projections: Major plays and operas are just a movie ticket away 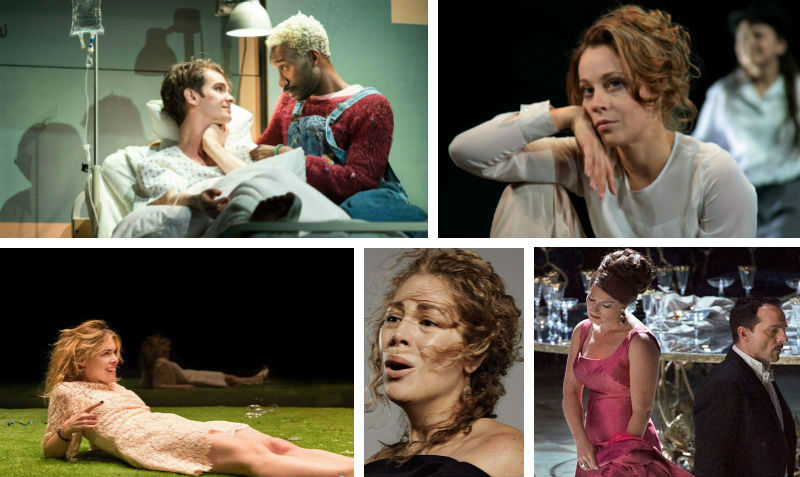 Clockwise from upper left: Angels in America, Uncle Vanya, The Exterminating Angel, Norma, and Yerma are but a few of the HD theater broadcasts at two Ann Arbor movie theaters.

If you don’t live in New York City or London, and perhaps don’t have the money to go to The Metropolitan Opera or the National Theatre on a regular basis, you might feel like you’re missing out on some amazing arts events.

But HD broadcasts of productions from these venues to movie theatres around the world are a way for people all around the world to see legendary works like La Bohéme, Hamlet, Everyman,Der Rosenkavalier, and more, performed by legendary performers such as Helen Mirren, Benedict Cumberbatch, Ralph Fiennes, Plácido Domingo, Vittorio Grigolo, and Renée Fleming. NT Live has been broadcasting shows from the National and other theaters in London to movie theaters since 2009, and The Met: Live in HD has been broadcasting operas since 2006.

“We want to make the arts more accessible to everyone,” said Ray Nutt, CEO of Fathom Events, the entertainment content provider that often broadcasts live theatre, music, and dance events to movie theatres, and that broadcasts The Met: Live in HD. “The Met: Live in HD provides an opportunity to see it right from their hometown at an affordable price," Nutt said. "Not only do they get to see the production live, but they see every detail, multiple camera angles, and even get behind-the-scenes access that is not available anywhere else.”

UMS is the Michigan Theater’s partner in bringing the National Theatre broadcasts to Ann Arbor. Mallory Shea, marketing and media relations coordinator for UMS, said she appreciates the chance to share these productions on a wider scale. “These incredible performances would normally require a trip overseas, but it's wonderful to be able to expand our offerings and provide an opportunity for local theater lovers to experience them right here in our own backyard,” Shea said.

This season, both the Metropolitan Opera broadcasts and the National Theatre Live broadcasts will have intriguing offerings. Quality 16 on Jackson Road and The Michigan Theatre on Liberty Street will be showing most of them; here are some of the most exciting.

The Metropolitan Opera’s broadcast season begins with Norma, Vincenzo Bellini’s 1831 tragedy about a druid priestess whose love of a Roman soldier is tested in myriad ways. American-Canadian soprano Sondra Radvanovsky, a Met mainstay who has made a name for herself particularly in 18th Century Italian opera, stars as Norma, and faces off against soprano superstar Joyce DiDonato as Adalgisa, her rival in love. Celebrated tenor Joseph Calleja stars as Pollione, the object of their affection. October 7, 12:55 pm.

“One of the titles I’m personally most excited about this season is The Exterminating Angel in November,” said Nutt. “The opera is getting its American premiere at the Met this season and is based on the acclaimed 1962 film of the same name. It’s a surreal fantasy about a dinner party from which the guests can’t escape -- the premise is very intriguing and we know the Met Opera will do the piece fabulously.” November 18, 12:55 pm.

Puccini’s powerful and stirring Tosca appears this season with a new production from Sir David McVicar. Sonya Yoncheva makes her debut in this role as tortured singer Tosca, and Vittorio Grigolo and Bryn Terfel as rivals for her love. January 27, 12:55 pm.

Legendary tenor/baritone Plácido Domingo returns to the Met once more alongside Sonya Yoncheva in Luisa Miller, an oft-forgotten Verdi piece about a father’s love and worry for his child as she falls in love. April 14, 12:55 pm.

To close out its season, the Met will bring Massenet’s Cendrillion, a Cinderella retelling, to its stage for the very first time. Met superstar Joyce DiDonato stars as Cendrillion alongside Alice Coote, Kathleen Kim, and Stephanie Blythe.

NT Live at the Michigan Theater

Angels in America, Tony Kushner’s epic, Pulitzer Prize-winning story set against a backdrop of the AIDS crisis, probes the lives of New Yorkers, gay, straight, Jewish, African-American, and others, and connects them all with masterful insights on death, religion, sexuality, marriage, politics, and more. This celebrated revival stars Nathan Lane, Andrew Garfield, James McArdle, and Russell Tovey. Part 1 is September 24 at 6 pm, and part two is October 1 at 6 pm.

Simon Stone directs Billie Piper in an Olivier Award-winning performance as the title character in Yerma, desperate in her longing to have a child. This revival of the 1934 drama by Frederico García Lorca is set in modern times. Note: This production uses strobe lighting. October 22, 7 pm.