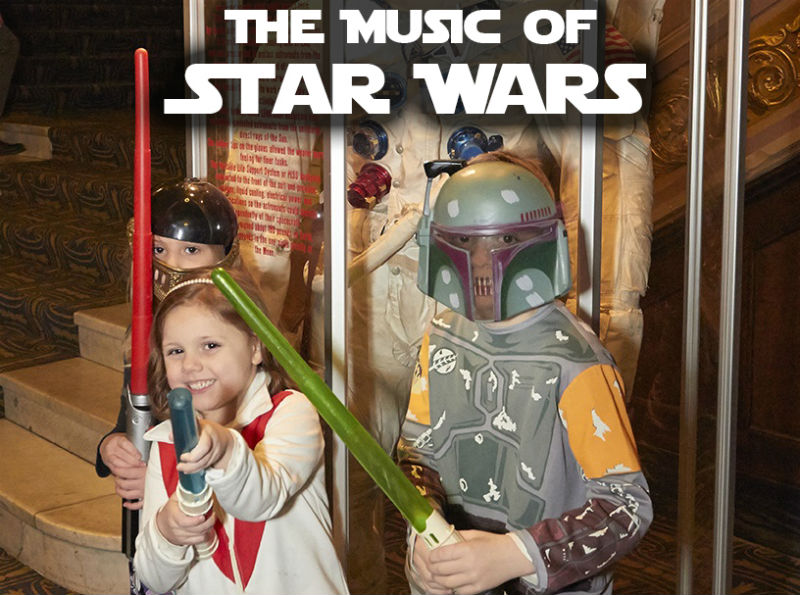 Return of the Jedis: Last year's A2SO Star Wars concerts were sold-out affairs, so the symphony brought them back.

Not so long ago -- last year, to be precise -- in a venue that’s close, close by, the Ann Arbor Symphony Orchestra (A2SO) played two sold-out concerts featuring John Williams’ music from the Harry Potter films. The audience response was so enthusiastic that A2SO immediately started making plans to perform two concerts featuring Star Wars music, and those concerts will happen Saturday night and Sunday afternoon (October 7-8) at the Michigan Theater.

“We were so overwhelmed (last year) ... and the audience, some of whom had never seen a live symphony concert before, told us that the music evoked powerful images for them, even though there was no visual component accompanying the music,” said A2SO conductor Arie Lipsky. “They also told us that they’d never thought that music had played such a vital role in the movies, and they thanked us for highlighting the music on its own. So many said, ‘Now we’re hooked on seeing live symphony orchestra shows,’ and we responded by investing in music from all the Star Wars movies.”

“Before, we’d used an arrangement that was available for a band or high school orchestra, but this is the real deal for us, and it’s a challenge,” said Lipsky. “John Williams’ music is very, very demanding, very difficult. When the musicians realized we were getting the Signature Editions, they asked for the music to be made available to them as early as possible, so they could practice. So we’ve all been very excited.”

Though video clips will not be part of this weekend’s symphony concerts, Ann Arbor-based Ring of Steel Action Theatre & Stunt Troupe will perform some fight (or light saber?) choreography; attendees are encouraged to dress in Star Wars costumes; and Sunday’s matinee concert, designed with families in mind, will be preceded by activities and an instrument petting zoo.

A2SO’s lineup for both performances includes the original movie’s “Main Theme” and “Imperial March” (from A New Hope), as well as “Parade of the Ewoks” (from Return of the Jedi), “Duel of the Fates” (from The Phantom Menace), “Battle of the Heroes” (from Revenge of the Sith), and “Scherzo for X-Wings” (from The Force Awakens).

What sets John Williams’ movie scores apart? “When you play that ‘Main Theme,’ every kid, from second grade and up, knows what it comes from,” said Lipsky. “His music is so upbeat and soaring, and there’s a sense of looking to the future that’s typical of (Williams’ work). When he portrays Darth Vader, the bad guy, the music is dark and in your face. ... And when he portrays Princess Leia, the music is so loving and lyrical. You can just imagine the features of the princess. And then there’s the funny and ridiculous cantina music. I don’t know of any other composer who can describe that scene so well in music. It’s just so funny and clever.”

But Lipsky also recognizes that Williams draws inspiration from the best. “Williams is such a fine composer ... and he knew whom to take after: Wagner, and Prokofiev, and Holzt, and Strauss. He uses their techniques at times to really make his music that much more brilliant.”

And given the concerts’ theme, you won’t need the Force to figure out what kind of baton Lipsky will use to lead the A2SO on Saturday evening and Sunday afternoon. “Use your imagination,” he joked.

A2SO's "The Music of Star Wars" concerts are Saturday, Oct. 7 at 8 pm and Sunday, Oct. 8 at 4 pm. A photo booth and cocktails are available from 6:00-7:30 pm on Saturday. On Sunday, there will be pre-concert activities from 2:30-3:30 pm, including a photo booth, hands-on museum, and an instrument petting zoo.