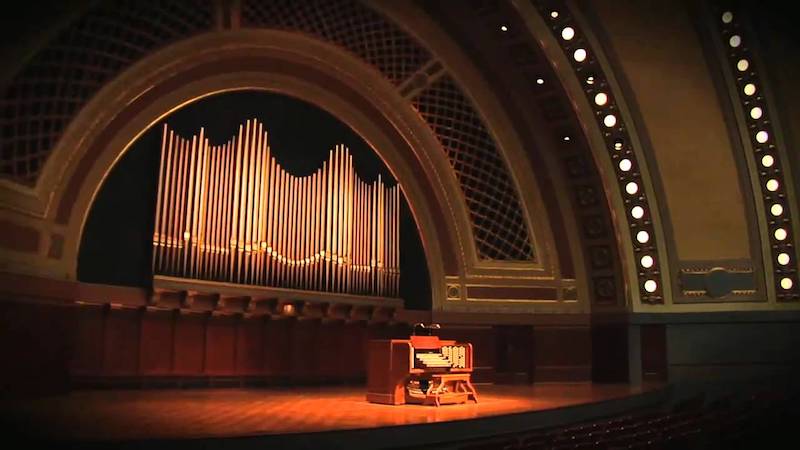 This Sunday, March Fo(u)rth to Hill Auditorium at 2 pm for a very special performance by the Ann Arbor Concert Band, led by conductor, composer, and organist Jim Nissen. We caught up with Nissen to ask a few questions about this weekend's concert -- "The King of Instruments" -- and why band, organ, and Kubrick fans shouldn't miss it.

Q: Tell us about the Ann Arbor Concert Band. What makes it unique?
A: The Ann Arbor Concert is celebrating its 39th year. Back in the '70s, two local musicians, Vic Bordo and Dave Julliett, founded the band. The membership includes several former and current music educators, as well as dozens of other professions: doctors, lawyers, businessmen, engineers, etc.

Q: There are some pretty heavy works on this program! What inspired you to tackle these works for organ and band?
A: For a couple of years now I've wanted to do a concert called "The King of Instruments," featuring works for concert band and organ. After all, the organ is a wind instrument, too. There are dozens of great works out there, but we selected works that we thought would show off the colors of the organ; we also didn't want to perform works that we've done within the past five years (so that narrowed down our options).

Q: Tell us about the guest organist. Did you collaborate on choosing the program?
A: Our guest organist is one of my closest friends, Scott Van Ornum. We've worked and performed together for more than 30 years. Scott is a world-class organist, and he knows the organ at Hill as well as anyone.

Q: We understand there are a few works on the program that might appeal to film fans. What themes might be familiar to moviegoers?
A: Well, yes and no. Anyone who's seen Kubrick's 2001: A Space Odyssey will certainly recognize the opening of Strauss' "Also Sprach Zarathustra." But when we're performing the finale of the Saint-Saëns "Organ" Symphony, I'd rather the audience enjoy the spectacular sound and not think of the soundtrack for Babe.

Q: What's next for the Ann Arbor Concert Band after this weekend's performance?
A: Our fourth and final concert of the season will be on Sunday, May 16. It's called "Symphonic Broadway" and will include works by Bernstein, Gershwin, and many other Broadway giants.