Songs for Everyone: Joanna & the Jaywalkers project universal emotions with a powerful voice 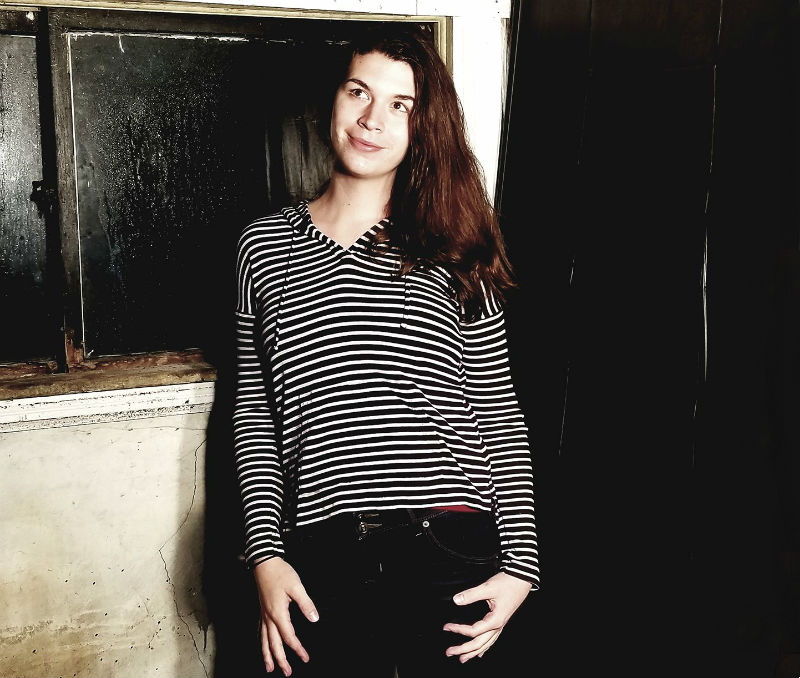 Joanna Ransdell's voice is an audible red light that commands you to stop whatever you were doing and just listen to her sing.

This story was originally published on April 23, 2018.

The 28-year-old Ypsilanti resident's gorgeous vox is dark but mellifluous, swinging from the edge of vulnerability to the side of quietly defiant, using slight inflections and lyrical twists to tell her relatable stories. Ransdell's timbre is located in the Stevie Nicks / Natalie Merchant / Patty Griffin solar system -- a full, pure, powerful projection of beauty injected deep into the universe and straight into all your feels.

The Ann Arbor-raised, Community High School-graduating Ransdell recently released The Open Sea Before Me, her debut album with Joanna & the Jaywalkers. The record is filled with lovely, low-key chamber-folk pop and it's quite a bit different from Ransdell's 2014 solo LP, Open Fire, which fits squarely in the piano-centric lineage of Tori Amos, Fiona Apple, and Regina Spector.

“I feel bad saying this for anyone who has enjoyed it,” Ransdell said, “but I kind of hate that album. I cringe a bit if I listen to it. I don't sound confident in what I'm singing/playing and I'm not super happy with the arrangements of the songs.”

Open Fire isn't bad at all, just embryonic. You can hear the seeds of what Ransdell would become on the heartbreak heavy The Open Sea Before Me. On the Jaywalkers' record, her rich, controlled, and confident voice delivers smart, clever, and personal lyrics wrapped in memorable melodies. But on Open Fire, Ransdell sometimes doesn't sound like she fully trusts her natural voice to convey complex emotions, so she belts out a few lyrics with more heat than the songs demand.

“I think that album I released four years ago was still me trying to figure out who I wanted to be as a musician,” Ransdell said. “I was probably trying too hard, which I think is what you're referencing with the vocals. When I started writing with guitar I discovered a new side of myself that felt more like me rather than trying to emulate someone else. Piano is still a great love of mine, but guitar has been a really fun adventure so far. When I started making the new record I was nervous that I would never be able to capture the vision of what I wanted to create, but I'm so pleasantly surprised with how The Open Sea Before Me turned out. It feels very authentic to who I am, and I'm really proud of what we created."

With the switch from piano to acoustic guitar, Ransdell formed the first version of Joanna & the Jaywalkers in 2014.

“We got to play The Blind Pig, which we loved, and Ferndale Pride, which was really fun. We lost steam after my backup singer, April [Hickey], moved away,” Ransdell said. “It was pretty devastating losing her; she was such a great fit and our voices meshed really well. Luckily she came back to sing on the album with us, so you can hear her lovely voice on many of the songs.”

After Hickey’s departure, Ransdell focused on finishing her master’s degree at Eastern Michigan in social work.

“I ended up taking a year off mostly because it was my final year of grad school [at EMU] and it just got to be too much. As soon as I finished school in 2017, I got back to writing and reformed Joanna & the Jaywalkers,” Ransdell said. 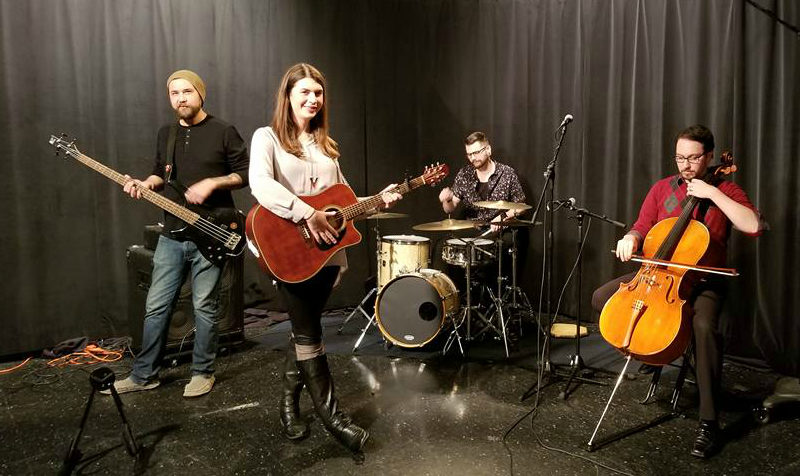 Drummer Dylan Miller has been with Ransdell from the start of the band and, she said, “is probably the most intuitive musician I've ever worked with.” Bassist-guitarist Michael Seever, who has played in the punk/garage scene for a while, “brings a really fresh perspective, and has been amazing to work with,” Ransdell said, while cellist Anthony Marchese is the husband of one of her best friends.

“I'm obsessed with strings,” Ransdell said, “and when April left -- she played viola with us -- I knew we needed a string player to feel complete again. I definitely lucked out being able to play with these guys. They are so talented and understand my vision for the songs I write. It's been the coolest experience collaborating with them.”

The Jaywalkers' collaboration was expertly documented by Eric Wojahn at his Solid Sound Recording Co. on the north side of Ann Arbor. There isn't a single weak song among The Open Sea Before Me's eight compositions and nine tracks -- two versions of "Pirates" are on the record, with the whole band playing on one and Ransdell closing the album with a solo version. The comely LP invites the listener in with warmth and immediacy, in part because the majority of the record was recorded live in the studio. That includes Ransdell’s first-stab vocals, which were supposed to be there to guide the songs while recording the band, not end up on the finished product. The common way to record is to overdub the singing later, but Ransdell’s voice was so strong and present on those live takes that there was no need to recut the vocals. Some lyrics are ever-so-mildly rushed on The Open Sea Before Me, and sometimes her singing tails off subtly, but Ransdell's performances serve the songs superbly and the stiflingly notion of perfection is tossed aside in favor of real-time artistic expression.

“The songs really showed up that first day in the studio, and everything just came together,” she said. “A lot of them were done in one take and my original plan was to re-record vocals separately so they could be super polished, but when I tried to do that, I found that I preferred the original vocals. There was something effortless about them and, like you said, they aren't perfectly executed, but I feel like I was willing to sacrifice precision for authenticity. And the way the songs sound on the record just felt right from the get-go. We didn't have to manipulate much, pretty much what you hear is how we sound.”

The Open Sea Before Me begins with “Mermaid,” featuring Ransdell on acoustic guitar and accompanied solely by sea and seagull sounds, then flows into “The Shallows,” which also begins with Ransdell solo. But the latter song gradually adds elements -- wordless background vocals, then kick drum plus doubling vocals from Hickey, then cello and more drums -- until all the pieces blend together and the tune ramps up into double-time. “Mermaid” and “The Shallows” almost act as sister songs, not only aesthetically but also in their watery metaphors: "There are no fish in the sea like me / for me to find" and "I think about Nessie / swimming around in the dark / knowing when she comes up for air / they'll catch her and sell her to a theme park" in the former; "I will never get out of this place by swimming in the shallows / shallows of my little heart's ocean / the open sea before me lies untraveled / but I have no protection / so I can't bring myself to dive in" in the latter.

“I also like the idea of ‘The Shallows’ and ‘Mermaid’ being sisters because I feel like they represent polar opposites talking to each other,” Ransdell said. “Together they represent the simultaneous need to be uniquely you and also feel as though you fit in somewhere, something we probably all wrestle with at one point or another.”

The third song, "Not About You," opens with the line "Eyes like fishing lures," and the penultimate song is "Poseidon" -- the only piano-based song on the record, with lyrics such as "let me wash upon the shore" -- so you might think Ransdell is obsessed with water. But despite the album title being nabbed from a lyric in “The Shallows,” Ransdell said the record’s high-seas theme was entirely by chance.

“Oddly enough the ocean theme was not intentional, it just kind of happened,” Ransdell said. “First with ‘The Shallows,’ then ‘Pirates,’ ‘Poseidon,’ and ‘Mermaid,’ and some other songs that didn't make it on the record. I was playing some of them for April when we first started jamming and she said, ‘You really like the nautical theme don't you?’ And I was like, "Oh, yeah ... I never realized that!" So the ocean theme is there but it's not central to all the songs. I feel like the overall theme is growth and recognizing your own worth, but using the idea of venturing off into the ocean as a kind of metaphor for that.”

By documenting emotional growth in her songs, Ransdell lays bare intimate thoughts and feelings in a frank manner. The ability to express herself openly is inspired, in part, by her day job as a family therapist at St Joseph Mercy Ann Arbor Hospital.

“I do think social work has impacted my music in a meaningful way,” Ransdell said. “I'm always encouraging the folks I work with to be vulnerable because, although it's scary, it's what opens us up to experiencing all the good parts of life. And being vulnerable with my music has been terrifying at times, but it's probably been the most rewarding thing I've ever done. I've been waiting to make this album for a long time and it's amazing to see that folks are connecting with it.”

Ransdell is also able to separate the songs’ lyrical content from her day-to-day life. Not that she’s singing from the perspective of a character, but rather she’s aware that fleeting feelings and singular moments don’t define a person. Plus, the emotions in her songs are universal, not endemic to Ransdell.

“I think what allows me to write such honest songs is realizing that while these songs are representing parts of me, they are their own entities,” Ransdell said. “The themes that I sing about are for the most part universal, human experiences. A lot of songs are about heartbreak, which we all have or will experience. And haven't we all wondered about stepping outside of our comfort zone and swimming beyond the ‘shallows’ at one point or another? I am able to be honest in my songwriting for the fact that people hear my music and then come up to me and say, ‘Hey, that song really spoke to me’ or ‘I really related to that one.’ People are seeing themselves in the music and these songs don't just belong to me anymore, they belong to everyone. There's something really beautiful about that.”

Joanna & the Jaywalkers play The Tap Room in Ypsilanti on April 28, and Ann Arbor's Wolverine State Brewing Co. on May 19 and The Session Room on June 9. Visit the band's Facebook or Instagram pages for more information.