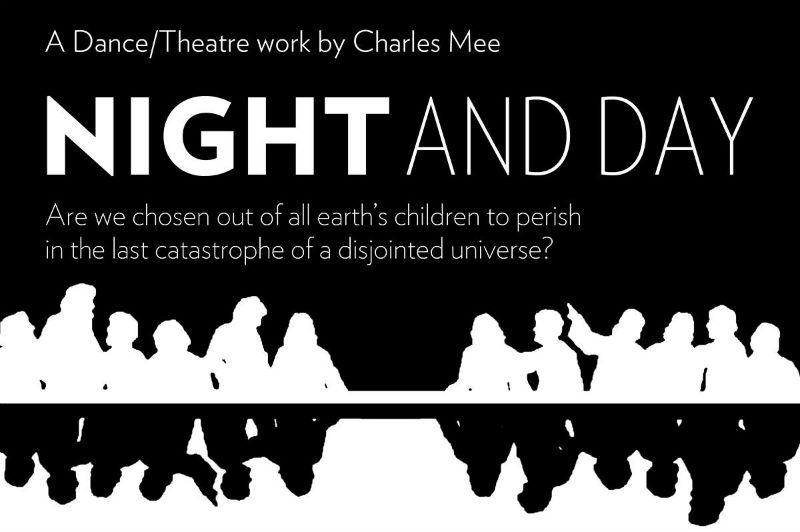 Though the title Night and Day initially calls to mind a famous Cole Porter tune, U-M’s new production of the same name -- consisting of a pair of playwright Charles Mee’s myth-inspired “dance/theatre works” -- bears absolutely no relation to the song.

Well, unless director Malcolm Tulip and his artistic collaborators decide it does, that is.

How could a theatrical presentation be so malleable? That’s both the allure and challenge of Mee’s work. Dubbed the “public domain playwright,” Mee draws on old stories, re-tells them with new text, and offers them up freely online by way of his (re)making project. Built on the idea that “there is no such thing as an original play,” (re)making invites artists to use Mee’s plays as the creative starting point more than a blueprint.

“It’s this incredible mixture of working with text, but then devising a whole new piece, too, because of the liberty he gives you to alter it and to remake his work,” said Tulip. “For me, the approach was discovering what all the parts meant, and what the skeleton of what he amassed looks like. Because even he’s bringing together elements from other sources, making a kind of collage. So you end up talking about and determining what you keep, what the thrust of each section is, and how you remake or rewrite them.”

“Night” explores the dark tale of Thyestes (as told by ancient Roman dramatist Seneca), which focuses on a pair of feuding brothers. After one (Thyestes) seduced the other’s (Atreus) wife and tried to seize the throne, he’s banished. But over time, Atreus hatches a more life-shattering revenge: he invites Thyestes back and feeds him -- without his knowledge -- the remains of his own children.

“Day,” meanwhile, draws its story from Greek poet Longus’ “Daphnis and Chloe” and chronicles the star-crossed love story of two orphans who grow up together and must triumph over numerous obstacles.

In pulling together this collaborative show, Tulip and his team have drawn from a broad range of music, images, video, and more; but above all, Tulip has held fast to an idea put forth by absurdist playwright Eugene Ionesco, who argued that a story needn’t feature a linear narrative or make literal sense in order to make an impact.

“We’ve gone right to the heart of that idea with this [show],” said Tulip. “A given scene doesn’t necessarily follow from the scene that comes before it … so the audience will have to just sit back and absorb it all and meditate on what stayed with them, or what happened to them during the scenes, because there won’t be one particular message or outcome. But if nothing else, the two-piece does posit that there’s only a thin veneer between our civilized selves and our savage selves, and that the urges we have in us, when not controlled, can cause harm. We see that happening now.”

Tulip also pointed out that Mee’s personal experiences shaped his approach to art.

“Chuck Mee almost died of polio when he was young,” said Tulip. “He’s talked about growing up with a broken body that doesn’t work the way everyone else’s does, and because of that, he also doesn’t like easy stories and narratives. … Rather than viewing a play as a mirror, he likes the mirror to be broken up into shards.”

U-M’s production is part of an ongoing collaboration between the Department of Theatre and Drama and the AST National Academy of the Arts in Krakow, Poland. Last year, a group from U-M staged a production to Poland, and this year, three AST actors, one dramaturge, a choreographer (Dominika Knapik), and a lighting designer (Knapik’s Austrian husband) have made the trip to work on Night & Day. The Polish students have gotten to see firsthand how actors are trained in America -- they’ve attended classes on stage combat, clowning, and the works of Anton Chekhov, among others -- and find ways to communicate beyond language.

“[Night & Day] does have a visceral, body-based language in it, which makes it easier to work together,” said Tulip. “It was something where everyone could speak together without having to speak the same language.”

Even so, a cacophony of voices must be involved when putting together this kind of collaborative piece and that can be challenging in and of itself.

“At one point, Dominika said, ‘This has not been all roses,’” said Tulip. “It’s not an easy process. … And it’s delightfully scary to work like this. I have no idea what the response will be. I like it, and we like it, otherwise, we would not have done it the way we have. We’re all excited to see the response we’ll get to it.”