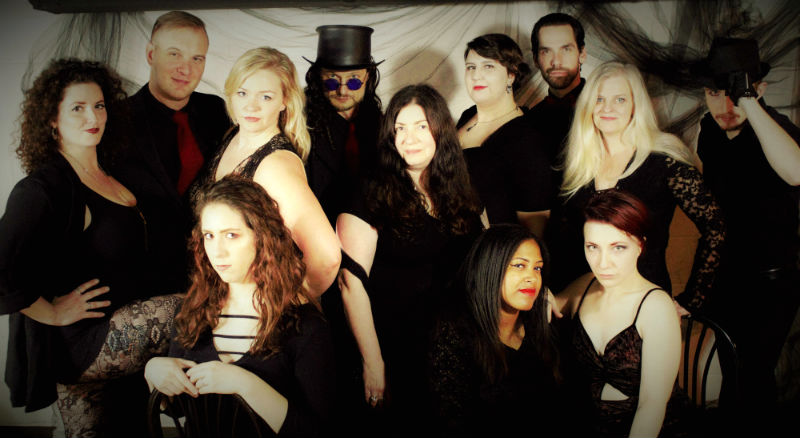 Music! Dance! Drama! And a wee bit of blood!

All that and more will feature in the Neighborhood Theatre Group's annual hit Halloween show, Black Cat Cabaret, which runs October 19 and 20 at Bona Sera Underground in Ypsilanti. Not appropriate for young children, Black Cat features live musical accompaniment by the NTG “Haunted” House Band, a cash bar, costume contest, and raffle.

Pulp spoke with NTG company member Greg Pizzino and Tom Hett of the House Band about the show.

Q: How and when did you get involved with NTG and Black Cat?
Pizzino: This is my third year doing Black Cat but my first since officially joining the company in full. Kristin and Aaron Dean, our literary manager, were both former employees of mine. I'd heard about their previous cabaret show, #Rise Up Cabaret#, and that's what originally peaked my interest in joining this show that first year.
Hett: I got involved with NTG during their first season. The first show I did with NTG was the Rise Up Cabaret where I played as piano accompaniment and I had a blast. I had to get involved with the company after that because everyone was just so nice and passionate about the arts, and we had a great time at the rehearsals and shows. I have been doing the Black Cat Cabaret's since the beginning. The first BCC, I played the piano for the company, and after that I switched to guitar and bass in the band for the next two years. This is, hands down, my favorite show to work on.

Q: This is the third year that Neighborhood Theatre Group has put on the show. What keeps the show fresh year after year? What do you think keeps people coming back?
Pizzino: Kristin Danko, NTG's artistic director, works really hard at upping the intensity and the complexity of Black Cat Cabaret every year. One of the first things we ask at the cast party when it's all over is, "OK, now how do we top it next year?" We really upped the dance numbers this year and added new stage makeup effects as well as two more cast members (it's hard to believe that we started with only six of us on stage that first year).
Hett: Doing the same show year after year may sound like it would get old quick, but we keep the Black Cat Cabaret fresh by bringing in new actors and new songs each year. You could come to see the show each year, and every time you see it it would be a new exciting show. The songs get better, the cast gets sexier, and we get more experienced! People keep coming back because we have such a great time putting on this show and people seem to get that! The audience can have a relaxing night out getting a drink, having a few laughs, and get to participate in a costume contest!

Q: Black Cat is NTG’s one show that is largely comprised of covers of songs, but the music is live, not recorded. How are the songs chosen? How does the House Band manage to accommodate those choices?
Pizzino: The setlist depends on part on what songs people bring to their auditions and in part on what songs Kristin has up her sleeve. There's a nigh mythical list of songs she's come up with that I don't think any of us has even actually seen, but that is long enough to keep Black Cat going for a good long time. One of my favorite numbers from last year's show, Kylista Geiger's cover of Eartha Kitt's "I Want to be Evil," was one that I'd suggested without anyone specific in mind. It became Kylista's debut with NTG and had all of us absolutely floored the first time we heard it in rehearsals.
Hett: BCC is mostly cover songs but we take those songs and put a story to them. Each number is like a little performance in itself. There are characters that you can follow throughout the songs and it kind of tells a story throughout the performance! The songs are chosen by our artistic director Kristin Anne Danko and they are given to the House Band to learn. Kristin has a vision for the show and the house band learns the songs so that her vision can become reality and so that the actors can have some good music to perform to! If Kristin told the house band to learn "Flight of the Bumblebee" for BCC then we would do it for her! We would do anything for her and the show.

Q: Last year, an original song was included and performed by the “Haunted” House Band. How was that created? Will there be more original songs in this year’s show?
Hett: Last year was the first year we included an NTG "Haunted" House Band original named "It's Halloween." The song was written by Aaron Dean who writes all of the plays such as Dispatches From the Dumb Decade, Carl Baby, and Cryptic, all performed by NTG. He is an amazing songwriter and lyricist. After Aaron writes the song, he gives it to us in the house band and we arrange it into a piece for the show! Come out this year to see BCC and you’ll get to see Aaron’s new original piece "The Thrill of Disguise" played by the NTG "Haunted" House Band.

Q: What’s your favorite part of Black Cat and why should people come to see it?
Pizzino: I've been lucky enough to perform songs by the bands who were incredibly influential to me personally the last three years, Tom Waits, Nick Cave and the Bad Seeds, The Talking Heads. For me, it's a return to my musical roots and a chance to pay homage to the people who made me want to perform in the first place. I'm doing it again this year, but I'll leave my number in this year's show as a surprise for you. Suffice to say, there will be blood. Honestly, come see this show because there's nothing else like it in the area. There's a reason it's become Ypsi's hottest Halloween ticket. And speaking of, be sure to reserve yours as this show sells out and you don't want to be disappointed at the door.
Hett: My favorite part of Black Cat has to be the rehearsal process. From the viewpoint of the band, you get to see the actors from start to finish. It’s amazing to see the first week of rehearsals, where everyone is learning the lyrics to a song, or the choreography, and then the last week of TECH rehearsals where everyone has been at it for weeks and they're all ready to put on a finished show. These actors have worked incredibly hard and it shows. They’re all ready to put on the Halloween performance of the year! Everyone should come out to see BCC this October 19 and 20 because these performers have been working their asses off and it shows. Anyone who would come out to see this show won’t regret it, and once you see an NTG performance you're going to get hooked and have to see more.