Love Is All Around: An interview with curator Andrew Thompson 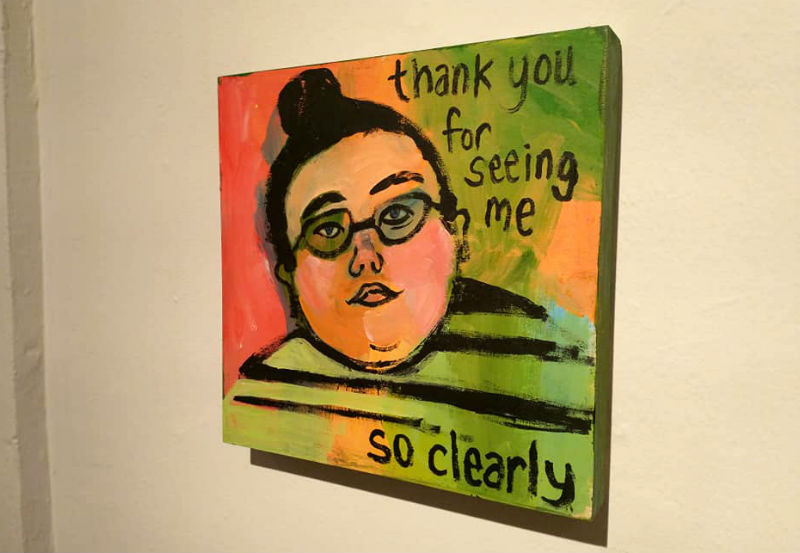 Being Seen by Adrienne Lesperance

Some art must be seen and experienced in person to get the full effects of its power. This is particularly true of the exhibit Love Has a Thousand Shapes at the Ann Arbor Art Center. Every piece in the show expresses a different aspect of love. Curator Andrew Thompson says that the inspiration came from a phenomenal experience he had in an independent study that he taught at Antioch College. “We read Virginia Woolf’s To the Lighthouse and looked at the artwork of Ann Hamilton,” who created art based on this story. “The character of Lily believes that love had a thousand shapes. She believes that the making of art is an act of love. This statement, this belief, served as the inspiration for the show.”

This message also influenced the pieces that Thompson, who is also a lecturer at U of M’s Stamps School of Art and Design, selected.

“Lily paints a landscape of a house, which led me to think about artists who deal with portraiture in a variety of ways. The general idea was to get pieces that portray a feeling or relationship between people who love each other,” Thompson says. “There are only five people in the show and I selected artists who make representations of love using collage, video, in abstract pieces, and in concrete portraits. All depict a loving or caring relationship or show a place or time of a loving experience.”

Walking upstairs in the Ann Arbor Art Center immediately plunges the spectator into a world of acts of love exhibited as art. Longtime Detroit teacher and artist Patrick Burton’s art catches the eye as soon as one enters the exhibit. “This kind of work does not translate in photographs," Thompson says. "You have to be in the space with it, let the crystals shine and sparkle on you.” A papier-mâché heart on wood glitters down from an entranceway. Acrylic paint and tens of thousands of Swarovski crystals make up pieces like I’ll Keep Your Kiss With Mine and Like Someone in Love. While seeing the pictures gives the viewer a preview of what’s to come, one simply must stand in front of the twinkling crystals and drink in the love.

Scott Northrup’s video exhibit Hämeenkyrö Redux is a love letter to a small city in Finland where he did an artist residency. It features the reading of this letter over scenes of natural landscapes, mundane everyday tasks like going to a grocery store, and a large party. Thompson says “that initially Northrup was making a different film, but that footage got corrupted. He lost most of his source material, so he ended up with a video that mourns the loss of the project he originally was working on. It copes with the difficulties of making art … and how sometimes you have to start all over again.”

Royal Oak artist Adrienne Lesperance uses collage as her medium, utilizing handmade paper from Hollanders. Thompson says that “her work is very reminiscent of renown collage artists [such as] Romare Bearden.” Judy Bowman, an artist who lives in Romulus, created portraits of Marsha and David Philpot who are well-known artists in the Detroit area. Bowman painted the pair prior to David’s death and Thompson says, “The works now function as a loving memorial to the beloved couple.” Justin Marshall's portraits show the love between humans and their pets. The Oak Park artist's featured portraits focus on the basic connection between men, women, and animal companions; Thompson says that they show “a particular moment of caring for another being.”

Thompson is thrilled to have the show at the Ann Arbor Art Center, as they have long supported local artists. “These days, there are fewer and fewer places to show art, where you can talk about art,” he says. “Property values [in Ann Arbor] have skyrocketed … a similar thing is happening in Detroit. There used to be parts of town where artists would hang out, where there was affordable rent but that is going away. People talk about Detroit’s comeback, but it is happening at the expense of local artists.

“The Ann Arbor Art Center has expanded programming and diversified the art that they show," Thompson says. "[The Art Center] and WSG [Washington Street Gallery] are so important because they make art accessible to all and also help artists sustain their practice of the work they love.”

"Love Has a Thousand Shapes" continues through October 27 at the Ann Arbor Art Center.