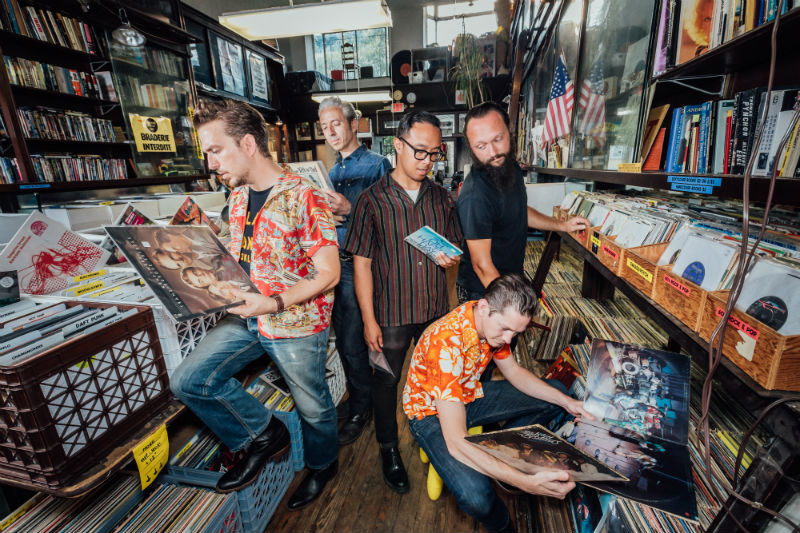 Q: Over the last several years you've played tons of shows in the U.S., Canada, and Europe. Are there big differences in audience reaction from country to country?
A: I think there is certainly a difference from country to country, that’s for sure -- even state to state there’s a little bit of a change. We did just play a two-nighter in Seattle and comparing the first and second night you would have thought it was a completely different city. It can change from night to night. In the larger cities that get a lot of traffic, it’s a little bit more difficult to make an impression. They may be a little bit spoiled. When you play Chicago, L.A., New York City you’re really the nth band in a wave of bands that have just come through. So when you get a really great reaction from a crowd in one of those media centers then you feel pretty good about yourself. The Midwest audience is like how they are in public -- they’re warm, and they know they have a rich musical tradition, especially in Michigan. I think you kind of have to win 'em over a little bit -- that’s not a mean thing to say. You are presented with maybe not arms folded, but "Alright, we’ve got it all here -- what have you got to show us?" Sometimes I feel like you’re a new kid in the schoolyard. You’ve got to jump out of the swing -- get the swing over the top of the bar and jump out of it.

Q: Your Christmas album Socks was really ambitious and so well done. How did it come about?
A: It was brought up over and over every year by management. Starbucks has gotta sell coffee at Christmastime, so they want that stuff churned out. In these days and times when it’s so hard for a band to make money, the pull toward making stop-gap music is an alluring idea. There’s no judgment there … I get it. We’re all trying to figure this all out. But I wasn’t interested in recording "Have a Holly Jolly Christmas." I love Burl Ives’ "Holly Jolly Christmas" every time I hear it, but I don’t want to make a cover. I don’t want to go to the website where they show you all the Christmas words that rhyme and try to fit them in and record some jingle bells. And then Nick Lowe made a [holiday] record called Quality Street. Like everything he does, it slaps you in the face with its brilliance. OK, so somebody just made a hip Christmas record. So that was the first time where I started thinking, “If I were going to do one, what would I do?” It had to be a rock 'n' roll record and not feel out of place or an anomaly. I wasn’t interested in covers, I just thought I’d write enough songs for an album. But I didn’t write an album full of dishonest schmaltz. There should be an amount of schmaltz because you can’t have Christmas without a bit of schmaltz, but there shouldn’t be a disproportionate amount. I was imagining the full range of emotions during that time of year for a kid: there is ecstatic joy with the occasional tinge of disappointment and selfishness. That was much easier to do than I thought it would be once it got off the ground. It ended up being one of the easiest and most pleasurable writing and recording endeavors I’ve been a part of.

Q: Any thoughts year about writing and recording your next album?
A: I have some song ideas and I kind of have a loose concept around it. I don’t want to say too much about it, but I do have a well of inspiration for writing new material. I think we’re going to work on it slowly through this year -- a weekend here and a weekend there -- and hopefully we’ll see something in 2020.

Q: Any idea where you might record this new album? You did Undivided Heart & Soul at the historic RCA Studio B in Nashville and that one came incredibly well.
A: Hmm, well I know there are a couple of studios I really like. The fellow that engineered our last two albums, Scott McEwen, just build an amazing studio in Memphis [Memphis Magnetic Recording Co.]. I just worked on a record there with my friend Travis Linville and I love it. Travis is busy touring with Hayes Carll. He plays every stringed instrument for Hayes. I really love how it turned out. But it kind of depends if a producer comes in and a producer wants to be in a certain place. I’m not super crazy about too many Nashville studios [McPherson has lived in Nashville for the last four years]. The leading contender right now is Scott’s place in Memphis.

Q: From having the pleasure of interviewing you a few times I know that your musical interests are really wide. So why do you play the music you do?
A: It’s like the first time I heard something that felt like a treasure only I knew about. I grew up in a very isolated place and I was obsessed with music and I wanted to know everything about everything. When I found the early rock 'n' roll stuff it was like nobody else knew about it -- later I found out later that a lot of people did! It was there but under a veiled disguise of oldies radio. When I finally figured out that this is really vital, dangerous music that changed the face of the planet, then it felt like it was the love of my life. As much as I love all kinds of stuff I never get as excited as I do when I hear a Little Richard record.

Martin Bandyke is the morning drive host and Music Director at ann arbor’s 107one, WQKL-FM.