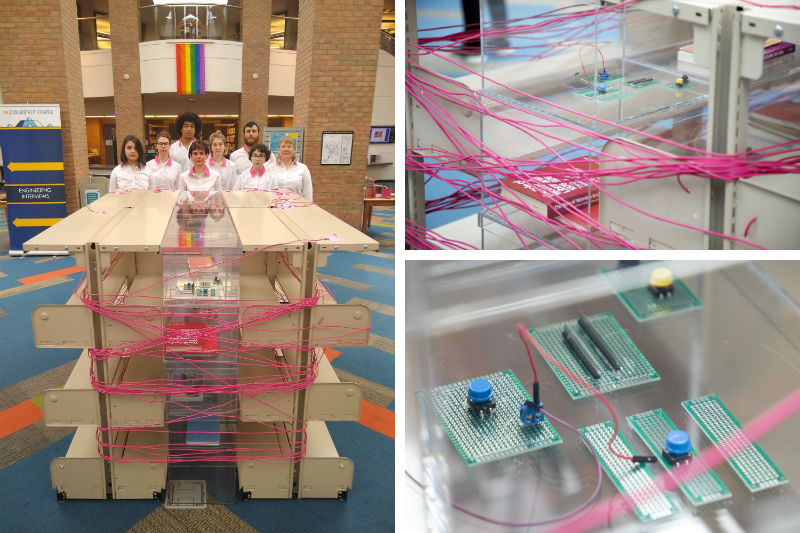 The ManosBuckius Cooperative (The MBC) says the aim of its performance pieces is to “embrace purposelessness!”

Artists Melanie Manos and Sarah Buckius say this half-facetiously since their absurd performative art explores humanity’s relationship with technology: “Our aim is to energize a space with our activities, and suggest new interpretations for existing structures both in the social/political and environmental/architectural sense.”

The MBC's most recent collaboration, TheMBC@TheLibrary, took on the future of libraries and explored gender politics by disrupting the space in University of Michigan’s Art, Architecture & Engineering Library on Friday, April 12. The performance resulted in an installation that will remain on view until May 26 as part of the Bookmarks: Speculating the Futures of the Book and Library, a “multi-venue exhibition” curated by Guna Nadarajan of University of Michigan’s Penny W. Stamps School of Art & Design.

The MBC further describes its work on manosbuckiuscooperative.com by saying: “Working as a team, we interact physically with everyday objects and technological devices by using them to perform unconventional, bizarre and highly non-productive tasks.” This facet of their work was an important part of TheMBC@The Library performance, which engaged with themes from libraries of the past, present, and future.

The movements of the performers “emblematize the shift from analogue to digital books, and from human to robotic librarians.” The eight performers, including myself, wore white shirts with pink collars, a tribute to what the artists describe as “pink labor, [the] gender wage gap, and emotional labor of librarians.” The performance consisted of all eight performers moving clear plexiglass containers through the space, some of which were empty, some filled with books or computer chips. Toward the end of the performance, the performers become increasingly erratic as the installation moved to completion.

I interviewed Melanie Manos and Sarah Buckius, and they collectively answered questions about the performance, their work methods, the speculative future of libraries, and potential upcoming performances by The MBC. 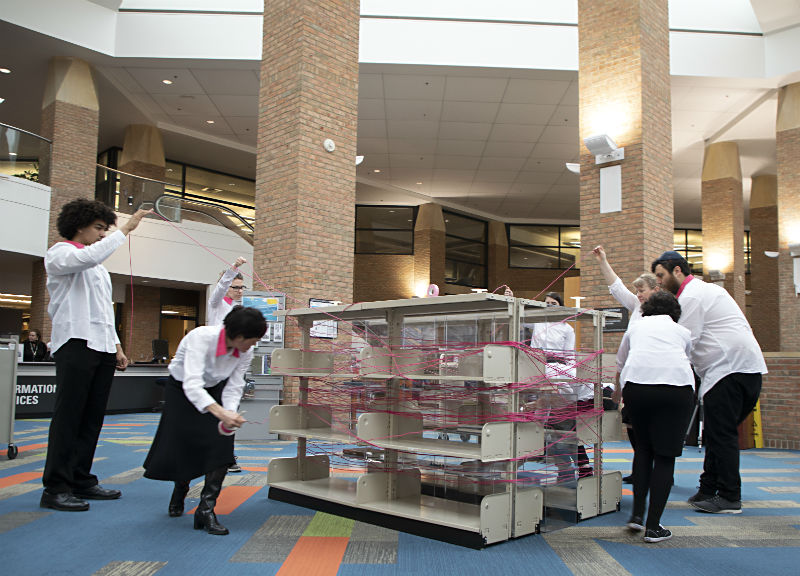 Q: How did you initially become involved in this project?
A: We responded to a call for proposals from Stamps School of Art & Design dean and Bookmarks curator Guna Nadarajan. We have created projects within other institutions and systems -- museum, university, gallery, office -- and thought this was a great opportunity to work within the library institution.

Q: What is your process for developing a performance?
A: In each context, we examine the processes, technologies, tools, movements, actions, and duties of labor. The previous locations were familiar to us in the sense of labor because we have worked in those spaces, through jobs and school. While we have used libraries, neither of us has worked as a librarian or library staff. Therefore, we needed to approach this project differently and interview librarians to get their perspective on the labor of the librarian.

In each context, we illuminate the humanity of the job, the struggles and challenges, the foibles, redundancies, and particularly the repetitive and durational aspects/actions of a specific type of labor.

In this performance, we worked on a larger scale than any of our previous projects with funding and staff support from University of Michigan Stamps School of Art & Design and the Art, Architecture and Engineering Library staff. The process was more involved especially in terms with having seven additional performers and encompassing two floors of the site (the AA&E library), choreographing movement through the space, individual and group actions, and the placement, scale, and design of the physical installation which remains in the library through the end of the exhibition.

Q: What inspired you to focus on the “pink collar” work of librarians for this project? How is this represented visually in the performance?
A: After interviewing several librarians at the University of Michigan, one mentioned this term in relation to librarians. We did further reading and learned more about pink-collar labor, which is a label given to work that has traditionally and predominantly been done by women such as nursing, education, etc.

The performers wear white shirts with pink collars. We also utilize pink wire during the performance and as part of the final installation. The wire represents the transition of analog to digital within the library, the electrical infrastructure that still powers buildings such as libraries, and has metaphorical implications as representing interpersonal work of librarians, mental maps used by librarians during research, information architecture, the complex mesh of emotional and intellectual labor of librarians.

Q: What do you hope viewers take away from the performance?
A: We see this performance as a sort of tribute to the labor of librarians. Performers engage in tasks and movements that stand as representations of the tasks of librarians, referencing the actions of librarians in the past, present, and future. Movement of boxes and performers represents the larger process of reallocation of space within libraries. Movement up and down escalators could be seen as the process of librarians doing research, performing information searches, working with patrons, the process of stacking and unstacking boxes, and building the stacks of boxes within the installation speaks to human necessity even within a robotic library. At this point, librarians manage the information systems, interface with patrons, are the intellectual drivers of the tasks -- even the digital tasks.

Objects used, including clear boxes, represent the increasing digitization of books and also the robotic libraries. Books within the boxes point to the still ubiquitous use of physical books, despite the increasing electronic media proliferation. The final installation includes two empty shelves sandwiching stacks of clear boxes, all calling attention to the interplay between digital and analog technologies in the library.

Q: You have been working as a cooperative team for quite some time. How did you first become involved in collaborative projects and how do these differ from your personal practices?
A: Collaboration naturally evolved after Melanie asked me to photograph her performances for the camera. I had already been doing work in which I performed for photographic images in my MFA thesis project. After working together, we quickly learned that we share a love of humor in art, specifically poking fun at the everyday human experiences of life that show perseverance, at the same time as mishaps. We are interested in the struggles people have with technology and the labor of everyday life.

Because our individual work both includes performance, photography, video, and human movement the transition to collaborative work was natural and so invigorating. It’s so nice to work with someone who sees the world with a sometimes similar perspective. Also, we don’t always agree immediately on aspects of a project but our cooperative process and admiration / respect for each other makes discordant moments inspiring as opposed to roadblocks. I believe when you work well together, ideas are better with “two heads as opposed to one.” We figure out ways to convince each other if we feel strongly about something and be honest and self-aware when issues are not as important to one of us.

Q: What, if anything, do you personally imagine for the future of libraries?
A: Places for community building, meeting places, inclusive spaces, information warehouses, technology hubs. Venues for workshops of all kinds, including various art forms and digital media/software. But hopefully they continue to be destinations for all ages to discover new books they haven’t read before and to step out of the cycle of purchasing and commercialism that dominate so much of our lives.

Q: What is the role of art and performance art in library spaces? Do you think that art will continue to be a part of library spaces as we move toward digital and robotic technologies?
A: Public libraries are inherently community-based and many offer arts programming. Performance art involves community interaction (performer-audience relationship), making it a logical integration into the community building efforts of libraries.

Q: Are there any upcoming MBC Cooperative or personal projects PULP readers should look forward to?
A: We are kicking around the idea of proposing similar projects (performance and installation) for other pink-collar labor contexts. Please visit our website: manosbuckiuscooperative.com.

The installation created during "TheMBC@The Library" is at the University of Michigan’s Art, Architecture & Engineering Library, 2281 Bonisteel Blvd., through May 26 as part of the multi-venue exhibition "Bookmarks: Speculating the Futures of the Book and Library."