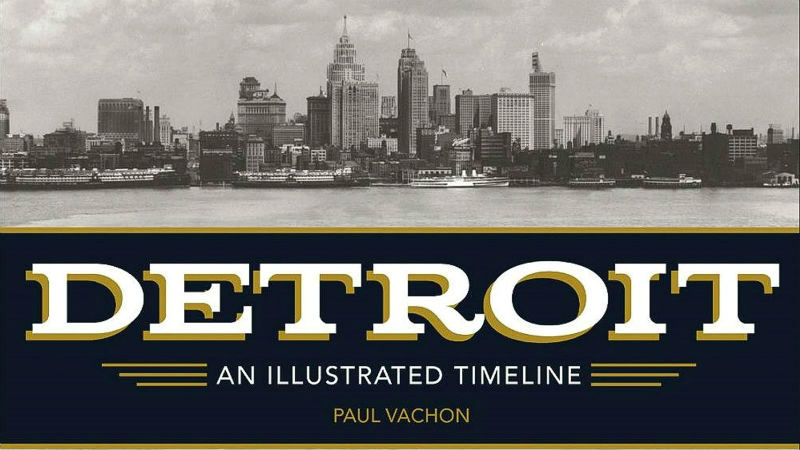 Detroit has lived under the flags of three countries, watched its fortunes soar with stove and automotive manufacturing and then crash back to earth with bankruptcy, and the city continues to evolve and change in myriad ways today.

Three centuries of this fascinating city’s history are explored in the new book by Paul Vachon, Detroit: An Illustrated Timeline.

“I always wanted to write,” the author says. “The Great Recession led to a job loss, which led to writing for trade publications and to my first book for Arcadia Publishing, called Forgotten Detroit.”

Since then, Vachon has published South Oakland County: Then & Now, Legendary Locals of Detroit, and Lost Restaurants of Detroit, as well as two guidebooks, MOON Michigan and MOON Michigan's Upper Peninsula. “History has been my passion in many ways,” he says. “And about two years ago Reedy Press approached me to do a timeline book about Detroit.”

The book is a chronological telling of events in Detroit, broken up into chapters that correspond to periods within the city’s history. “The subject matter ranges from military conquests to industry to individual people who shaped Detroit in some way," Vachon says. "The book examines political developments, business trends … all the way up to the bankruptcy.”

Timeline also features a large collection of historical photographs, which Vachon found at the Burton Historical Collection, the Walter Reuther Library, the Library of Congress, and from his own collection.

Of his favorite archival images, Vachon points to one of the David Whitney mansion:

It’s a picture of that building when it was a private residence, circa 1900, taken from the opposite side of the street, looking north. You can see the house, and you see building at the corner of Woodward and Forest, which was the location of the original Detroit Athletic Club of which David Whitney was a member. Behind the club was a field used for athletics like polo and soccer, and one of the reasons Whitney chose that location is that they had balconies on their home where he and his family could watch the games. The picture is remarkable for its clarity and the radical difference between the quaint, tree-lined street of Whitney’s day and how it is today.

There are many anecdotes in the book, but Vachon highlights the story of the role of slavery in Detroit as something readers should not miss.

“Some might be surprised to learn that from the city’s founding in 1701 until about 1825, there was slavery in Detroit," he says. "Many leading citizens -- Cass, Woodward, most of the prominent families -- were slave owners with some owning Native Americans, others owning Africans. There were some other differences from the South in that slavery was not always lifelong and children were not automatically considered the slave owner’s property, but it existed here for over 100 years."

After the Erie Canal opened and Michigan’s population increased, the opportunity for statehood presented itself. There had to be a balance of slave states and free states, and after the addition of Arkansas, Michigan emerged as a free state.

“In the book," Vachon says, "I talk about the politics that went into this admission process, what happened internally and arguments that were made both for and against entering as a free state.”

In all his books, Vachon stresses the importance of knowing one’s history:

To me, the most impactful issue of local history is the racial relations in Detroit and the Detroit area. One of the issues discussed in Timeline is the Milliken v. Bradley [Supreme Court] case, which struck down bussing and desegregation on a regional basis. This helped lead to the high level of racial segregation that we see today, with the suburban schools being overwhelmingly white and city schools being mostly non-white. So my thought has been, what if that case had gone the other way? It was a 5-4 decision. What would have our area been like if one judge had changed his vote? History is full of events that could have led to major differences in our society if just one little thing had gone differently. And that’s what makes it both fascinating and vital.

Paul Vachon reads from "Detroit: An Illustrated Timeline" at Literati on Monday, May 20 at 7 pm.

Thanks for the info, it is…

Thanks for the info, it is very useful.