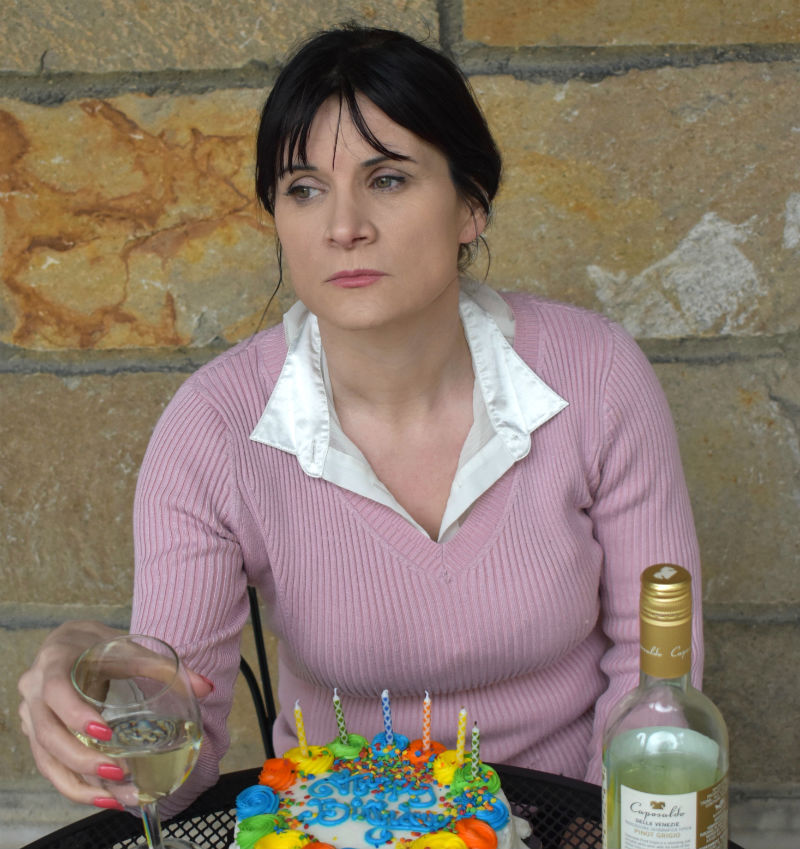 Lisa Coveney as Carol in Redbud Productions' presentation of The Herd.

Redbud Productions explores with humor and heart the dynamic of a family raising a child with special needs in The Herd by Rory Kinnear.

Mother Carol (Lisa Coveney) is anxiously putting together the perfect 21st birthday party for her son Andy, who is severely disabled and living in a care home. Also invited to the party are Carol’s parents, Patricia (Lenore Ferber) and Brian (Michael Haifleigh), and Carol’s adult daughter Claire (Katie Whitney), who takes this opportunity to introduce her new boyfriend Mark (Chris Krenz) to the family. Carol’s estranged husband Ian (Brian Hayes), who abandoned the family when Andy was a baby, also chooses to attend unannounced. In the words of producer Tim Grimes, “The intrusion does not go well.”

Now in its 20th year, Redbud Productions, offers acting classes for adults and high school students using the techniques of Sanford Meisner, which, among other things, focus on emotional work.

“We usually choose plays that have an issue at their core, but that are relatable and moving,” said Grimes (who is also the events manager at the Ann Arbor District Library). “This is a strong family and one that is fiercely protective. Each of the characters -- except for Mark, the new boyfriend -- has had their life strongly altered by the birth of Andy. Carol has dedicated and sacrificed her life to his care. Claire has been pulled in many directions – giving up many opportunities and relationships in order to help her mother and brother. Patricia and Brian have seen their daughter being worn down with worry. And Ian has to face the fact that he abandoned this family -- yet still feels compelled to return to them.”

The cast and crew of The Herd are all current or former Redbud students.

“We perform at Kerrytown Concert House, an intimate setting that fits the tone of our plays and group,” said Grimes. “We are also looking for emotionally moving plays that we can do with a minimal set that will complement the performances.” The setting for The Herd is the living room of Carol’s London home.

While The Herd has been used several times in Redbud classes, this production will be its Michigan debut.

“The Herd is a beautiful play that we initially used for a scene in class several years ago with … Lisa Coveney, who is originally from London. When we first used this scene, the play had been staged in London, but since that time it has also had a critically acclaimed run by Steppenwolf in Chicago.”

At the heart of this story is a family filled with love and devotion. “We would like [the audience] to be moved by these characters,” said Grimes. “[And] realize the power of love and of family.”

Redbud Productions presents "The Herd" at Kerrytown Concert House from May 30 through June 1 at 8 pm. For tickets contact the Concert House by calling 734-769-2999 or visit kerrytownconcerthouse.com.