Regrets, He's Had a Few: Former Wolverine and NFL wide receiver Braylon Edwards is forever "Doing It My Way" 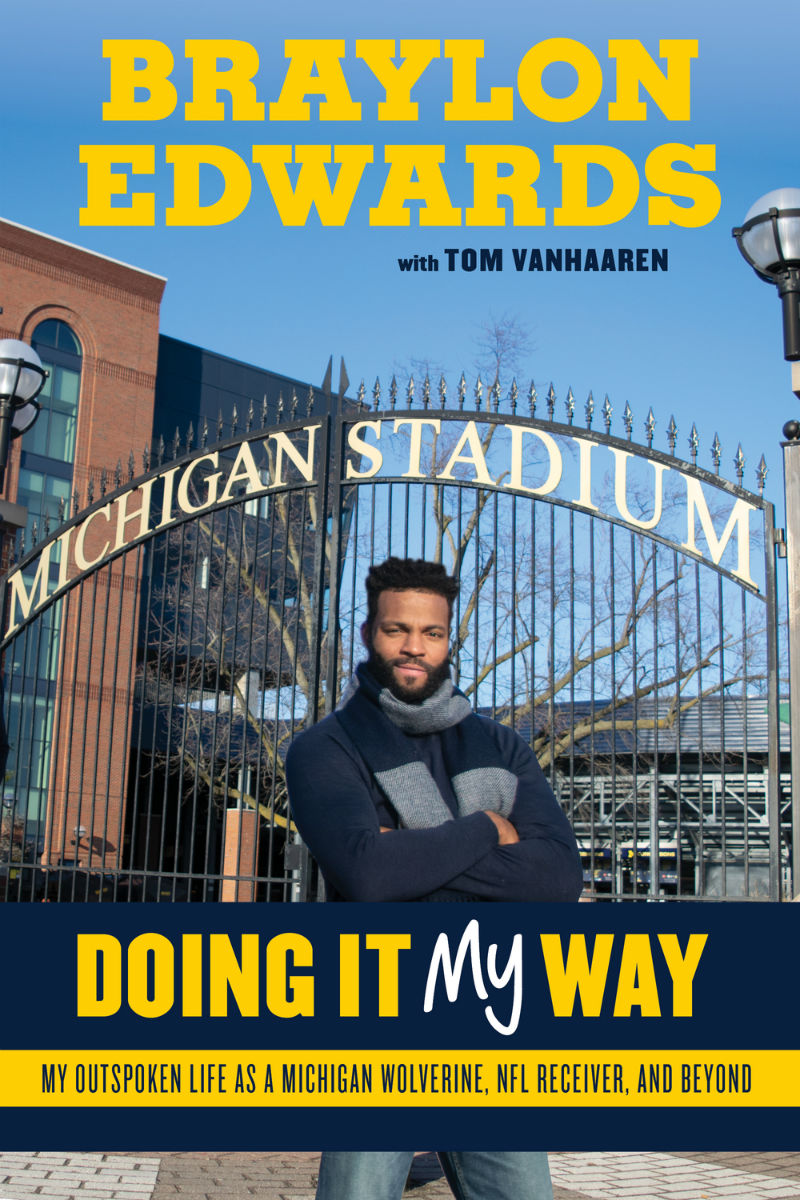 Former University of Michigan All American wide receiver and NFL Pro Bowler Braylon Edwards has a reputation for being outspoken, to say the least. But even so, he had to warm up to the idea of writing Doing It My Way: My Outspoken Life as a Michigan Wolverine, NFL Receiver, and Beyond.

“Triumph Books, my publishing company, originally approached me in 2017,” Edwards said. “I had no idea what my book would be about, and to be honest, at the time, the money was laughable. … So we said, ‘We’ll pass.’ And by we, I mean me and my mother. She’s my business manager, so I run everything by her. But as we started telling people that I was presented with this opportunity -- my aunties, my uncles, my cousins, my coaches, my friends, everybody -- I started to think there enough things I’ve gone through in my life that make my story unique.”

This included constantly traveling between two sets of parents as a child; being a “legacy” athlete since Edward’s father, Stan Edwards, played football for Michigan under Bo Schembechler; the ups and downs of Edwards’ football career, both at Michigan and in the NFL; and his struggles off the field, including his battles with drug use, anxiety, and depression.

“It became evident that the book should happen -- that this was something we should definitely sign up for,” Edwards said. “So when [Triumph] came back to us in 2018, I didn’t care so much about the money. It was more about my story out there. … People forget that there’s more to athletes than a helmet, or a golf club, or lacrosse sticks -- especially now, with social media and fantasy sports. It’s like no one cares about athletes anymore. It’s all about, ‘What can you do for me?’”

Edwards wrote Doing It My Way with ESPN’s Tom VanHaaren. And while you might assume that Edwards felt a bit nervous and vulnerable when his highly personal book debuted in September, that’s not the case.

“As we were writing, and Tom was recording our talks, and we’d go over things -- I was nervous then,” said Edwards, who now lives in West Bloomfield. “But then I thought about what people were already privy to over the course of my career. I’m a public figure, so there have always been things out there about myself, and my kids, and my kids’ mothers, the fact that I got DUIs … things have always been publicized throughout my career. So people already have an opinion of me, anyway. … Why would I be nervous about putting out my truth as it relates to the things that have happened in my life? So when it came out, I was excited, actually.”

One of the toughest things for Edwards to write about was his complicated relationship with his father. Though Stan Edwards was always there for Braylon, the father-son dynamic seemed, from Edwards’ young perspective, to be anchored in sports, and more specifically in Edwards’ athletic achievement. “I’d gone my whole life protecting the façade of our relationship, but the truth is there were bumps and cracks and bruises along the way,” said Edwards.

Other hard topics to write about included Edwards’ drug abuse; his reluctant, 2012 exit from the NFL, “and not knowing what was next, and how I struggled to cope and deal with being done,” Edwards said; and the bluntly critical tweet Edwards wrote after Michigan’s loss to Notre Dame in 2018, which caused the Big Ten Network to cut ties with him and angered Coach Jim Harbaugh and many Michigan fans.

More recently, Edwards spent time with a U-M administrator, who gently reminded Edwards that he’d dropped some passes during his own tenure. “He told me, ‘Imagine having to deal with hearing about those dropped passes for days on social media, while also trying to go to classes,’” said Edwards. “He raised the example of Ronnie Bell, who dropped the pass at the end of the Penn State game a couple of weeks ago, and how social media just destroyed this young kid. It brought me to my knees, metaphorically, thinking about that.”

Since the book’s release, even those close to Edwards have been surprised by some of its content. Edwards’ sister, for instance, “said she was surprised to learn about what I dealt with growing up, in terms of being bullied, and dealing with depression and anxiety,” said Edwards. “And that’s someone who lived under the same roof, and was one of my best friends.”

The most enjoyable parts of the writing process, meanwhile, involved Edwards revisiting his time being recruited by, and playing for, former Michigan coach Lloyd Carr, as well as realizing that “I had more fun times in Cleveland than I thought I did,” referring to his stint playing for the Browns. “I think a lot of Cleveland fans saw me as someone who really gave Cleveland all he had," Edwards said. "Sometimes you can feel as though there’s more of a hatred toward you, when really, there’s not. … Like, no matter what the number is of people who do hate you, there’s probably more that appreciate what you did. I gave scholarships to lots of Cleveland kids, and I was one of the only players to make it to every game and to every practice. But it’s like when there are a hundred positive comments, and we always focus on the two that were negative. … I miss Cleveland. I miss my home in Cleveland. That’s the best place I ever lived. I lived on a golf course, and it was the first house I ever bought for myself. … I got to know my neighbor, Hank, and I helped him through his divorce by being there for him. … The book allowed me to remember all those things.”

This past year, Edwards has given several talks to young people about his struggles with mental health and substance abuse. But are there things Edwards misses about the game itself?

“I miss that feeling you get around Friday night, Saturday morning, when you know the game is Sunday,” said Edwards. “I miss the locker room talk, the jokes in the locker room, getting ready for the game, the meeting room, where the coach gives his spiel. … Outside of that, it was fun, and I did it a long time at a high level, but I got enough of those moments so I don’t miss the actual playing part. I just miss feeling the game close at hand, and jokes with the team.”

Edwards still follows football closely, and his forecast for what remains of Michigan’s season may surprise people in regard to Ohio State: “Be optimistic. We get them at home, and we played well against Notre Dame. But MSU is the one that makes me nervous, because they seem to surprise us most, and give us the most trouble, when they’ve got nothing to play for. … OSU is what it is. People will expect us to lose that anyway. But MSU is the one that has me worried.”

Edwards set several records during his time on Michigan’s roster, but who would he consider Michigan’s top three wide receivers, excluding himself?

For starters, he said, you’d have to exclude someone else, too.

“Anthony Carter is like [Michael] Jordan to me,” said Edwards. “You don’t bother to put Jordan on a list, or into an equation like that. You just acknowledge he was the best and go from there.”

“Derrick Alexander, Amani Toomer, and if Mario Manningham would have stayed his senior year, he would be first, but since he didn’t -- I’d put him in a tie with David Terrell, then Amani and Derrick.”

Edwards mischievously noted, “You’re thinking someone’s missing from that list, right? Desmond Howard was a good receiver, but he was a product of everyone getting hurt. … Imagine if I tore my ACL, and Jason Avant got hurt in game three. It would have been Chad Henne playing catch with Steve Breaston all year, with Steve returning some kicks, too. That’s the scenario. … Desmond was a product of circumstance and time and place. His biggest talent was as a punt and kickoff returner, which became clear when he played in the NFL.”

When Edwards visits Ann Arbor now, he likes to visit old haunts like Zingerman’s, Maize and Blue Deli, Jerusalem Garden (which Edwards called “Ali’s place”), and Pizza House, as well as the athletic campus and West Quad -- to spin the cube.

Braylon Edwards appears at Literati Bookstore on Thursday, November 14 at 7 pm to sign and read "Doing It My Way: My Outspoken Life as a Michigan Wolverine, NFL Receiver, and Beyond."