Songs to Learn and Sing: Catching up with The Kelseys and KWITNY 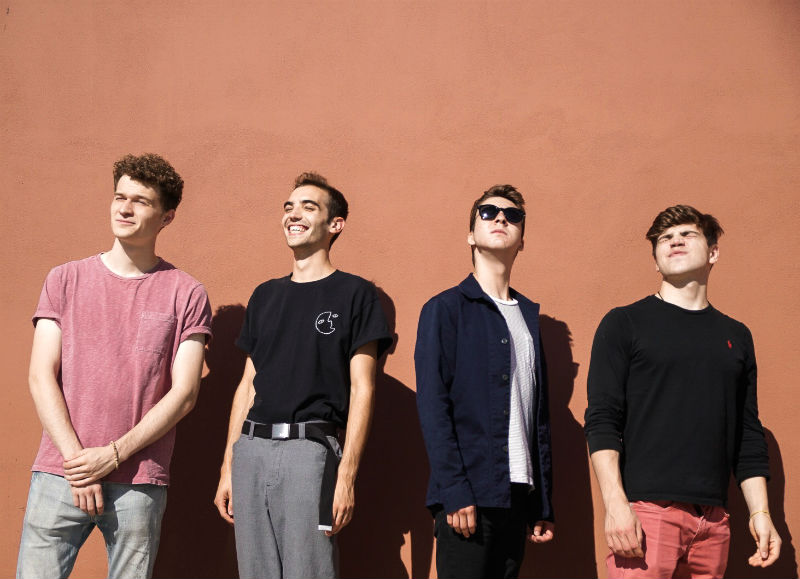 A lot of us hibernate in the winter -- and to an outsider, it may seem like The Kelseys have been slumbering since last spring. But the Ann Arbor pop-rock band, which has only played a relative handful of concerts over the past year, is comprised of four full-time University of Michigan students, three of whom are in their senior year.

It's no fun doing late-night load-outs at a nightclub when you know there's a mechanical engineering test in the morning.

But even if The Kelseys haven't been on stage as of late, the group did release a steady stream of songs in 2019, and singer-guitarist Peter Kwitny continued to create and release solo music, too.

The Kelseys, who formed in 2016 and named themselves after U-M's museum of archeology, recently completed their So Little to Say project with the release of "Something Else," the fifth song in the series. (A 2018 Kelseys tune was also remixed last year into slow-burn electronica: "Pollyanna (Jeff Basta Mix)")

"These tracks were recorded at multiple locations," said drummer Josh Cukier of So Little to Say, answering Kelseys questions for Kwitny, guitarist Evan Dennis, and bassist Liam O’Toole (who is a junior at U-M). "All live drums were recorded in Toledo, Ohio, at Steven Warstler's studio. Most of the lead vocals were recorded there as well. Most other components -- guitar, bass, synth, and percussion -- were recorded in The Stu, which was the name affectionately assigned to [my] bedroom at the house we lived in last year. A few remaining components were recorded in the Duderstadt Studios with Ryan Cox acting as the engineer; these include the saxophone, piano, spoken word, and group vocal parts in '1998' and 'Something Else.'"

The Kelseys have self-described as an "indie-dance pop band," though that doesn't give enough credit to the group's radio-friendly sound: It's easy to imagine So Little to Say's upbeat "This Life" or "Everything Is Beautiful" wedged between Fun. and Foster the People on Ann Arbor's 107.1-FM.

So Little to Say also shows The Kelseys' versatility. A song like "Something Else" has hints of the breezy island pop of the 1980s Brit band Haircut 100 and the 2000s American group Vampire Weekend, while the dirty-synth number "1998" nods to the experimental side of MGMT.

The Kelseys released a video for So Little to Say's second song, the singalong "Tourist," featuring Kwitny walking around his hometown of New York City -- a place he's planning on returning to after graduation, which will make it even harder to see the quartet on stage.

"For the time being, the band intends to continue largely through digital means," Cukier said, "sharing ideas and creating tracks by recording independently and sharing via e-mail as much as possible. We do want the project to continue beyond college, but Josh is moving to Kalamazoo come June and Peter will likely return to NYC."

The Kelseys are terrific live because all the members are talented musicians, but since the group pieced together So Little to Say over several recording sessions where all the musicians need not be present, maintaining the band remotely may work. But Kwitny also does KWITNY, his long-running solo project that pumps up the poppier, four-to-the-floor side of The Kelseys and whose compositions are created primarily inside his computer. Kwitny as KWITNY also released five songs last year, each one sounding like a potential Top 40 hit, and he provided vocals for "Lost" by fellow producer and U-M student Namix.

"Everything under that moniker tends to live more firmly in the electronic realm," Cukier said of KWITNY. "Kelseys songs can come from any of the members and tend to have a distinctly different sound from the stuff released under the KWITNY moniker. KWITNY tunes are usually much poppier and cannot exactly be played by a band. They are just another way for Peter to express his creativity when he has musical ideas that don't really fall into the realm of what The Kelseys should play."

Last spring, U-M used the anthemic "Pollyanna" in a commemorative video for 2019 grads. (It's the second fab video featuring "Pollyanna"; read about The Kelseys' version here, made during 2019's winter vortex.)

This year, that graduation video will apply to three-fourths of The Kelseys. But will the band have time to play any shows between now and diploma day?

"We currently do not have any concerts on our radar," Cukier said, "but we will be sure to update you as we schedule more for the coming semester."

It's back to the study rooms for The Kelseys -- and back to the hibernation cave for the rest of us.

Related:
➥ "Quite the Panorama: The Kelseys' 'Pollyanna' Is a joy-inducing song and video about overcoming sadness" [Pulp, March 25, 2019]