Bill Edwards made the most of the pandemic era with an ambitious new album, "Whole Cloth" 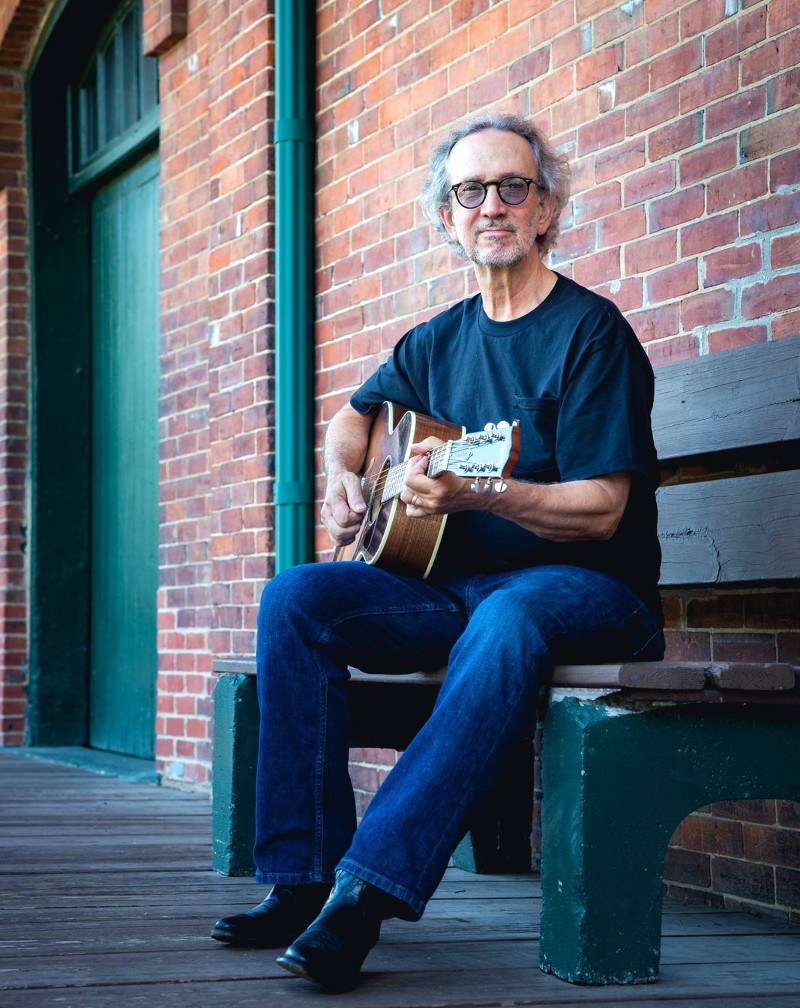 Where some musicians may have understandably felt limited by the constraints of the COVID-19 pandemic, Ann Arbor singer-songwriter Bill Edwards took it as an opportunity.

Unable to collaborate with other musicians, Edwards decided to record full-band music all by himself—playing instruments both familiar and new, and learning software packages as well. He wrote, recorded, and started the process again, ultimately finding himself with 30 fully finished songs.

The resulting album, Whole Cloth, is a major achievement, filled with gems about chasing love, finding love, losing love, and more—and shifting among various musical subgenres that all fit under the broad umbrella of Americana, from old-time country to roots rock to western swing.

While nearly all the songs concern relationships in one way or another, “You’re Still Here” is a touching ode to a friend long gone, while “Ain’t Wet Yet” finds some humor in the politics of trickle-down economics and “Sing Me” praises the power of music itself.

Edwards, who was already skilled on multiple instruments, uses his versatile abilities to great effect throughout the album, such as a warm acoustic guitar solo on “Slow Down the Moon” and wistful fiddle on “Billy’s Lament.” The latter is one of three instrumentals on the album, crafted while Edwards had a paralyzed vocal cord— even that couldn’t slow down his creative process.

"I’ll play a short selection of my favorite older songs, and then dig into the new record," Edwards said. "For the latter, since the arrangements rely heavily on drums and a variety of lead instruments, I’ll play acoustic guitar and sing to tracks from the album. I’ve got them recorded in my looper pedal, and it works quite well."

Edwards agreed to answer some questions about the new album.

Q: In your album notes, you explain how “Whole Cloth” is basically “What I did during my lockdown.” When you started, did you originally envision what a large project it would become, or did that happen over time?
A: It definitely happened over time. I wasn’t even planning on releasing an album. I literally set out my goals (in a spreadsheet!) at the beginning of the lockdown. They were:

I thought if I could accomplish these goals, I would be in a good position to do realistic-sounding full band arrangements and recordings of my songs. I’ve played electric and acoustic guitar, mandolin, and fiddle for years. Also, I’ve written steadily over the last few years at the pace of about a song a week. Achieving these goals would give me the ability to hear the songs the way I imagined them. So, no, there was no real plan except to dig into the tools above, and get going with the next song.

Q: Your notes also explain how the inability to collaborate in person led you to play all the instruments on the album. What did you learn as a result of doing that? Would you do it again, as a conscious choice?
A: The biggest thing I learned was to think like a drummer, at least to an extent. That’s an ongoing process. The Superior Drummer instrument is just that, an instrument. So it’s not just a matter of learning the software, you have to learn to play the instrument. If you listen carefully, you can hear my evolution over the course of the months, although the tracks aren’t presented chronologically on the record. I’ve been fortunate to work over the years with some amazing recording engineers (my mentor Phil Dillon in particular) and musicians in Nashville. This gave me a great starting point from an arranging perspective. I would definitely do it again, and I continue to produce and record new songs. I’ve got several already finished. Once I decided to release a record, the 30 tracks on the album seemed like a nice round number to package.

Q: Did the pandemic change your songwriting process? Did it have an impact on the themes in the songs?
A: I don’t think it changed my songwriting process much. As mentioned, I write pretty steadily as a general practice. If I let that slip, I tend to go a little crazy. That’s one thing that happily didn’t happen in the pandemic! My songs really come from three general prompts:

So, no, that hasn’t changed much.

Q: You mention that you had a paralyzed vocal cord for three months during the making of the album, and that led to the three instrumentals. Did you approach those any differently from writing a song with words?
A: Songs that work for me have structure. They have various sections that make the whole thing work. The poet William Carlos Williams once said that a poem is a machine. I think he meant by that that all the parts have to work together or the undertaking won’t be a success.

Instrumentals, to my way of thinking, work the same way. The various melodic and rhythmic elements have to work together. So, in that way, instrumentals are the same as songs, with verse and chorus-like sections. Of course, you’re entirely reliant on melody and harmony to keep the listener interested, when you don’t have lyrics to help power the machine.

I have to note that I had no assurance during the paralysis period that my voice was going to return. That made the instrumental exploration that much more important to me.

Q: There are 30 songs on the album, and each one is distinct and individual—you never sound like you’re repeating yourself. Are there one or two of the 30 that you’re particularly proud of, or that you feel especially strongly about?
A: Yeah, it’s really all over the musical map, as I said in my liner notes! My favorites change from day to day. I really like the twin fiddle Texas swing numbers, because it was long a goal of mine to be able to pull that style off convincingly, and I’m deeply smitten with that kind of music. I like the mix on “Your Poison Love” quite a bit, and the Santo and Johnny-inspired “Daydream” is a current fave.

Q: While most of the songs on the album are about relationships, “Sing Me” is about the transformative power of music. What inspired that one?
A: I think that one came from the second impetus mentioned above: a theme. I was thinking about being trapped in a place you don’t love and yearning for someplace you miss. The rest of it evolved from that idea. The title evokes for me the Merle Haggard masterpiece “Sing Me Back Home,” although the story is entirely different. The imposed isolation of the lockdown may have had something to do with it, too.

Q: Was it difficult not to be able to perform live during the pandemic? How did you cope with that challenge?
A: It was difficult, yes. The way I coped was to keep writing and to head down to my basement studio every day like going to the office. There was a whole, vast world to explore there, and it kept me intrigued and fulfilled. I think it also worked as my hidey-hole, without me really realizing it. I’m happy to get back to live performance, insofar as we can. My first live gig really kicked my butt, I have to say! You forget just how much physical work it is to stand in front of an audience and play and sing for an hour!

Q: Do you have any other projects in the works that you’d like to mention, or anything else you’d like folks to know?
A: I’m continuing to write at my usual pace, and still getting together via Zoom and a little bit in person with our “Song Salon” group. That’s a collection of fellow writers who provide invaluable early input on works in progress. The Zoom aspect of it started with the pandemic, and it’s been great because writers from anywhere can join us. I hope that continues. Since indoor venues are still risky and aren’t really reopening yet, the live performance future is uncertain at best. As the weather turns towards autumn, it’ll be harder to play live outside. So I imagine I’ll be heading down to the studio on a regular basis again. I doubt I’ll be putting out another 30-track omnibus anytime soon, but who knows?

"Whole Cloth" is available on Bandcamp. Bill Edwards will perform a CD release concert at 7 pm on Friday, Aug. 27.

Love the interview and love…

Love the interview and love the fact that Pulp provides a much needed link between artists and those who appreciate it!