Erin A. Craig’s "Small Favors" conjures dark forces in a reimagining of Rumpelstiltskin 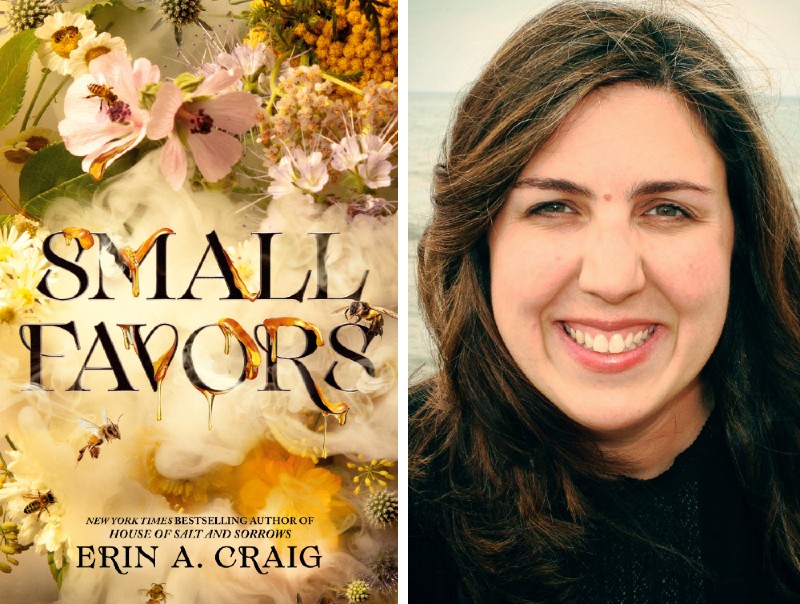 The cover of YA author Erin A. Craig’s new novel, Small Favors, looks deceptively bright with flowers, bees, and honey dripping off of the letters in the title. Yet what sounds too good to be true just might be, as character Ellerie Downing learns in this reimagining of the fairy tale, Rumpelstiltskin.

The setting of Amity Falls is a small, remote settlement in the Blackspire Mountains where neighbors rely on each other for their various skills, from carpentry to poultry farming. The Downing family are apiarists. They produce honey and also bake delectable honey cakes.

This well-balanced community starts to fragment when people are killed on trips out of town, crops go bad, and accusations of wrongdoing multiply. Initially thought to be an issue with oversized wolves, it becomes clear that something more sinister is stirring and seeking to control the people, something that gives gifts in exchange for favors.

“They were playing with me, laughing at my fear.”

“You heard them laugh?” The words fluttered from my mouth, as insubstantial as autumn leaves caught in a brusque wind.

Samuel scrunched his eyes shut. “I hear them laughing even now.”

The creatures are about to get even more involved in these characters’ lives.

Ellerie, in her late teens, not only faces danger from the things lurking in the pines but also must step up to take care of her family amidst tragedy. She faces many challenges and accompanying emotions alone and has to figure out who is friend or enemy, including relatives who show up unexpectedly and a boy who starts to tug on her heartstrings. Ellerie reflects:

My place in the world was nebulous, a malleable concept only given definition by the space I occupied. When I was in the classroom, I was a schoolgirl. At home, I was a daughter. When someone eventually courted me, I’d be a wife, a mother.

But until then, what was I?

In addition to confronting the growing horror unfolding around her, Ellerie is coming of age.

Craig is the author of two novels and is a University of Michigan graduate now living in West Michigan. After interviewing her last year about her first novel, House of Salt and Sorrows, I caught up with her to discuss her second book.

Q: When we last talked in early 2020, you were moving back to Michigan from Memphis. What’s it been like to be back in Michigan?
A: It’s been wonderful! My daughter’s favorite season is now winter! We’ve stocked up on sleds and snow pants—there truly is nothing cuter than a kid in snow pants! We moved back during the start of lockdowns and looking back, it was such a surreal time. We stuck very close to home for the first year or so, and for a while, it truly didn’t feel like we had left Memphis. This summer we were able to explore more—beach days and trips to Frederick Meijer Gardens—so much fun!

Q: I’m excited to hear about your new novel! How was writing your second book, Small Favors, different from your first book?
A: Second books are definitely strange to write! It took me about three months to finish the first draft of House of Salt and Sorrows. Small Favors took a little over a year, but it was drafted in so many starts and stops. I’d begun it in the spring before HOSAS came out and had to hit pause several times as HOSAS things popped up. I also was getting used to a new writing schedule. My daughter was one when I wrote HOSAS, and I could always count on getting a lot of words written during her nap time. All that changed during Small Favors—no naps and suddenly she was walking and running! I got used to waking up at five in the morning to try to cram in as much of the workday as I could before she’d get up. I’m very thankful I’m a morning person!

Q: The two novels themselves are distinct in focus with House of Salt and Sorrows set on the sea and Small Favors nestled in the mountains among flower fields for the Downing family’s bees. The farms, forest, and creatures of Small Favors play a huge role in what’s going wrong with the town of Amity Falls. Did you do any research in order to write about bees and other aspects of farming?
A: I absolutely loved doing the research on Small Favors! I didn’t know a lot about bees before starting to world build and found the apiary techniques and tips endlessly fascinating. One of my favorite moments was actually getting to go meet a hive—one of my dad’s friends is a beekeeper and he let me come out and put on an apiarist suit! We opened up one of the hive boxes and checked on how all the bees were doing—it was incredible to see all these things I’d learned from books and articles actually up close and in person! If our HOA didn’t object, I’d love to have a hive of our own.

Q: Small Favors is divided into sections for each season, starting in the late summer. What attracts you to emphasizing seasons?
A: So much of farm life is dictated by the seasons that it felt only right to divide the book up by them as well. While much of the details of Ellerie’s life remain the same day to day—cooking, looking after her sisters, etc.—her overarching responsibilities shift as the weather changes. In the summer, the family is focused on tending to the hives, making sure their crops are growing. As fall begins, they start to harvest their honey and begin canning food. Winter is spent mostly inside—we see all of the girls working on sewing projects and schoolwork. Spring … well … spring just explodes all over!

Q: Something is haunting and stalking Amity Falls, and there are some very spooky scenes. Do you enjoy feeling scared by books and other sources of entertainment? And scaring your readers?
A: We’re heading into one of my very favorite times of year—Spooky Season! I’ve always loved reading eerie and uncanny books—growing up, I think checked out every cryptozoology book at my local library and read them all multiple times! It only seemed natural to infuse that sense of dreadful horror into my own writing. It gives me the giggles every time a reader reaches out to say they had to get up in the middle of a chapter to turn their lights on. I can think of no higher compliment.

Q: This book is loosely based on Rumpelstiltskin. Tell us about the connection to that fairy tale.
A: Rumpelstiltskin was always one of my favorite fairytales. My sister and I had an audiobook cassette tape we’d gotten from sending in the tops of Jello boxes—one side was Snow White, the other was Rumpelstiltskin—and we wore it out, listening to it over and over. There’s so much to love about the story—the king spotting the miller’s daughter for the first time, the crazy lies her father tells, whole palace rooms filled with straw, waiting to be spun into gold—it’s enchanting. When I set out to retell this beloved plot, I knew I didn’t want to keep it in its original European setting. I thought it would be fun to substitute something different for the straw into gold business. Once I thought about bees making honey, I was hooked and quickly dreamed up Amity Falls and the Downing family.

Q: You talk about your work and give teasers on social media. Have you been able to connect with readers? Aside from drawing readers to your books, how does engaging in places like Twitter and Instagram contribute to your writing?
A: I like how social media creates little pockets of community within the publishing industry. Writing books is very much a job, but we don’t all have offices to go to, water coolers to hang around. There is no Penguin Random House company-wide picnic (but if there ever is, I totally call the Sussexes for my softball team!). I didn’t start writing (with the intent toward publication) until after I’d had my daughter and was on a hiatus from my career in stage management. I loved every moment of being at home with Tiny Craig, but it was a very hard time for me, not seeing co-workers and friends. The day I discovered Book Twitter, a whole new world opened up. There were people who were at the same stage in their writing journey as I was. We could commiserate over query rejections and sheepishly ask each other what different industry terms meant. There were authors a few steps ahead of us to aspire towards and look up to. There were stories of crazy pipe dreams playing out in real-time that inspired hope and wild dreams. I won’t say that social media contributes toward my actual writing—in fact, I’m certain it steals away precious moments where I ought to be writing!—but it has made me feel like a better writer, one who belongs to a community of friends and found family.

Q: Any recommendations of books to read this fall?
A: So many! I’ve been completely smitten with Caitlin Starling’s The Death of Jane Lawrence (out October 5). It takes many tropes from gothic fiction and spins them on their heads. It’s the perfect read to curl up by a crackling fire with! Erin Hahn’s Never Saw You Coming is the best thing I’ve read in forever. It’s so joyful and full of heart. I wish I could go back in time and give it to my teenage self! And, I’m about to start reading Tiffany D. Jackson’s White Smoke. I’m a sucker for anything that comps to The Haunting of Hill House!

Q: What’s brewing next?
A: I’m hard at work on edits for a yet-to-be-announced project and in that wonderfully dreamy stage of research on another story. I can’t say much on either but they both are very atmospheric and full of unseen dangers. I can’t wait to share more soon!