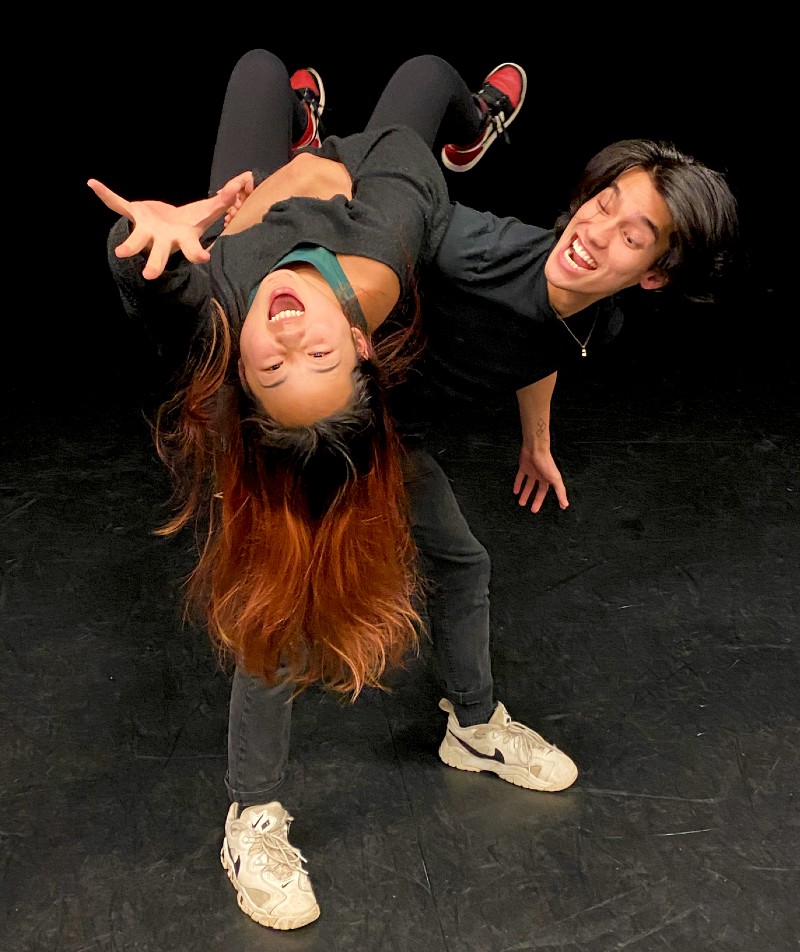 Theseus, the Duke of Athens, and Hippolyta, the queen of the Amazons, are preparing for their wedding. But Theseus must deal with a complaint from an angry father that his daughter is defying his wishes and the law and has declared her love for someone else. The daughter Hermia loves Lysander not Demetrius, her father’s choice, who has forsaken his former love, Helena. A band of fairies will scramble and unscramble these lovers because as Lysander notes, “the course of true love never did run smooth."

“I like to think of the play as Theseus and Hippolyta’s dream, how they’re working out this match,” said Cardinal. “The story is, of course, they fall in love on the battlefield combating against each other, and respect and love grow out of their mutual admiration in combat, which is very strange. How do they work this out? Theseus sees himself as this rude sort of sexual being much like a donkey, or is he a teenage boy who’s a rebel and cool or the follower of rules? Hippolyta sees herself as the gawkie teenager who essentially beats up the boys as she is an Amazon, or is she the pretty, pretty princess? So, for me, I’m filtering the whole thing through this dream which unites all the pieces as opposed to making it a very fractured tale.”

The play tells several stories. The upcoming wedding ties them together. The story of the star-crossed lovers is one love story. Another love story concerns the fairy king Oberon and his jealousy concerning his queen, Titania. The amateur Rude Mechanicals rehearse and self-censor and rewrite the “tragic comedy” love story of Pyramus and Thisby. Each group speaks differently. The lovers and the fairies in verse, but in different forms and rhythms; and the working class actors speak in prose.

The evening we met for the interview, Cardinal was beginning the evening's rehearsal by working with a group of actors on the choreography of a scene where the fairy Puck has Lysander and Demetrious running in circles to prevent a fight. Later he will work with the Rude Mechanicals. He rehearses the large cast in small groups to work around the busy schedules of his actors.

“These kids are in dance classes at 8 am and rehearse until 10 pm, so I tend to be really good about only calling in the people I need and not having them all in at one time,” he said.

Cardinal is a professor of musical theater performance but each year the music theater department performs a non-musical production.

“In their four years, they experience a Shakespeare play, a contemporary play, a docudrama so that in the arc of their experience they can try on the different styles,” he said. “Our kids work in film and TV a lot. They get to do straight plays and Shakespeare festivals, so even though it’s the musical theater department, they are well prepared for the diversity of the business.” 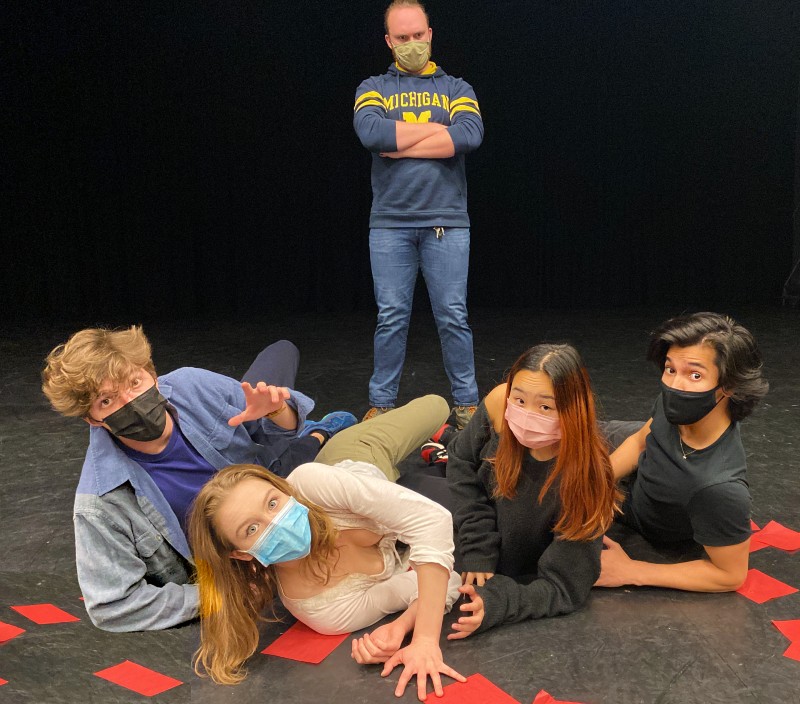 The cast for this production is a mix of sophomores, juniors and seniors. The U-M program is highly competitive and selective. Only 1.7 percent of applicants are admitted.

“They’re really smart, super-selective, super-talented, and they come here at the end of the day and do four or five hours or really intense rehearsal, they’re amazing,” Cardinal said. “We see the outcome of this program. I was looking at four roommates who went on a series called Sex Lives of College Girls, one is starring as Tina in Tina the Musical, one is starring as Christine in Phantom of the Opera on Broadway, and one is Nala in Lion King on Broadway and I think those are just kids who were rooming together in Ann Arbor three years ago. They’re amazing and have tremendous potential.”

Maggie Kuntz is a musical theater student class of 2022 from St. Louis, Missouri. She plays Helena.

“She loves Demetrius and Demetrius loves Hermia,” she said. “A lot of what she’s pursuing throughout the play is for Demetrius to love her. And I think she initially sees Hermia and her world through Demetrius’ eyes. Demetrius is unable to love her and she sees that as a testament to her flaws and shortcomings. She’s learning that she is worthy of love and if he doesn’t love her, then she is willing to accept that and believe that could be true.”

Kuntz said the long hiatus from acting caused by the pandemic has been difficult.

“It’s been unbelievably hard and it’s been, honestly, only now that I realize the magnitude of how difficult it was, especially for actors who thrive on performing for people,” she said. “It was definitely a time of introspection.”

Sofia Deler is a musical theater student class of 2023 from Orlando, Florida. She plays Peaseblossom, one of the fairies who serve the fairy queen Titania.

“Basically these are nature fairies so they work with nature and are in charge of regulating nature so that the seasons change and everything is in balance,” Deler said. “In this play because of a fight between Oberon and Tania there is an imbalance in nature and things get a little crazy so the fairies are under Tania but anxious and stressed because the usual flow has been stopped. I’m kind of a tough fairy, the one who makes sure and holds down the fort, makes sure Tania is protected, makes sure that when dangers and hindrances come to her I’m there saying nope.”

This is Deler’s first experience with Shakespeare.

“I really love working with Vince because he brings Shakespeare to us in a way that’s so contemporary and so relevant, that’s so digestible it doesn’t seem beyond my scope as an actor,” she said. “It feels like he simplifies it and shows us just how universal the themes are and the characters and the language can be. I’m having a lot of fun.”

Caleb Quezon is a musical theater student class of 2023 from Tampa, Florida. He plays what Cardinal calls the bad boy of the play.

“Lysander is the bad boy because he does not agree with the Athenian laws in place, especially those keeping him from what he most wants, which is Hermia,” Quezon said. “He doesn’t deal well with authority although he is still afraid of the consequences that are out of his hands.”

Quezon said he wasn’t sure he was right for the part.

“I found a lot of aspects of the bad boy that I never really identified with before, but I really understand why I was thought of for this role,” he said. “It’s been a lot of fun, especially with a character that is straight. At first, I was a little daunted by it, especially about whether I would have to change my voice or my mannerisms or anything like that, but it’s very much different aspects of myself that are coming out and that’s a lot of fun.”

Cardinal said he loves the passion of the lovers and the sincere enthusiasm of the inept but hilarious Mechanicals. But what he loves most is the audience response to this popular play.

“The biggest thing for me about this play is that I love the audience’s reaction,” he said. “I love how they come to Shakespeare a little afraid of Shakespeare. They are intimidated by it, they think it’s boring, and then they get into this show and they’re laughing and they understand it and are engaged and I love seeing that transformation.”

The student actors agree that the play offers audiences a lot of entertainment and some things to think about.

Kuntz said the play takes on a different feel when the action moves from Theseus court to the magical woods.

“As an audience, you’re going to be affected and changed in some way by this world, by being part of it and engaging in it,” she said.

Deler hopes the audience is entertained.

“I hope they laugh,” she said. “I hope they are entertained and I hope they are reminded that this production has a youthful spirit to it and that’s the direction we’re taking it, in all the characters. It’s not a matter of age. There is child’s play and a childlike view of the world that is humorous, fun, and playful. I hope the audience can tap into the part of themselves and be entertained and relaxed.”

The University of Michigan production of "A Midsummer Night’s Dream" will be presented at 7:30 pm on Thursday, Dec. 2, 8 pm on Friday and Saturday, and 2 pm on Saturday and Sunday at the Arthur Miller Theatre in the Walgreen Drama Center on the university’s North Campus. For tickets, visit tickets.smtd.umich.edu or phone the ticket office at 734-764-2538.