In Real Life: Indie rocker Kelly Hoppenjans shares pandemic-era experiences on “Can’t Get the Dark Out” 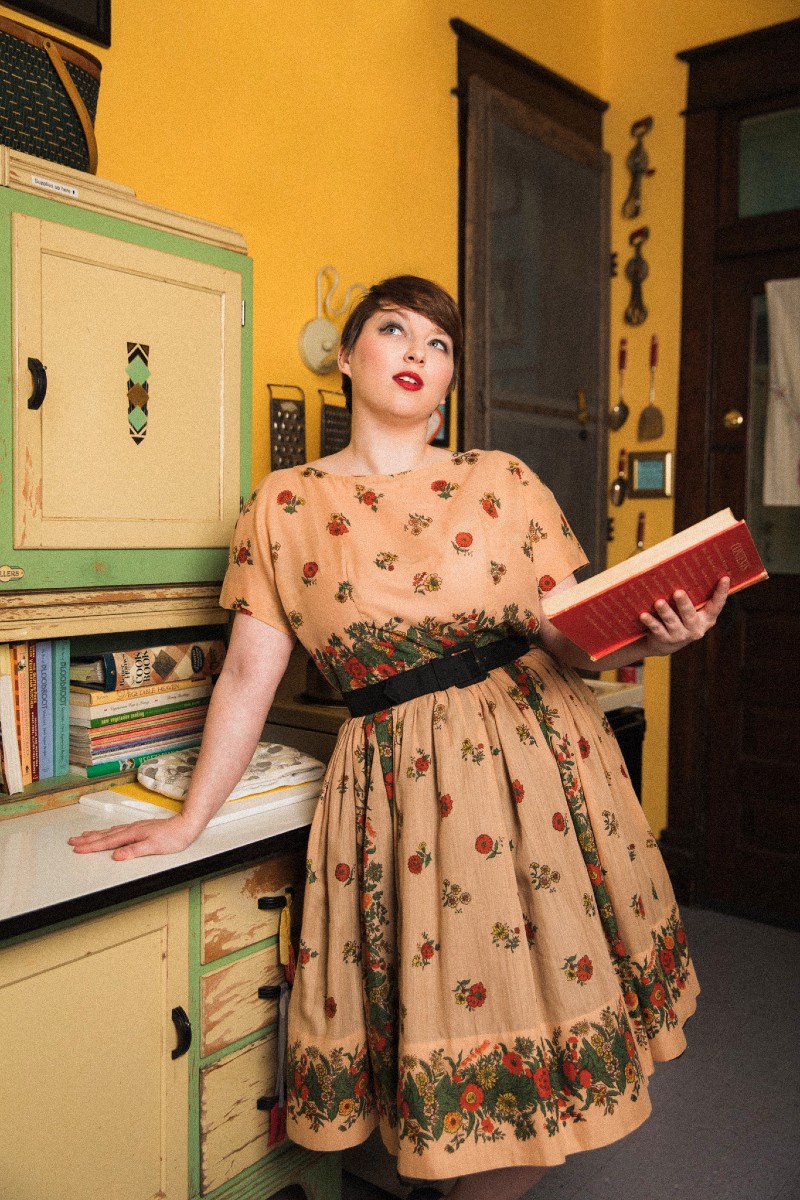 Kelly Hoppenjans dissects past heartbreak, navigates newfound love, and weathers interstate moves on Can’t Get the Dark Out. Photo by Autumn Dozier

Kelly Hoppenjans prefers to view love and life through a realistic lens.

The Ann Arbor indie-rock singer-songwriter and guitarist shares a real-life account of pandemic-era relationships, life changes, and personal growth on her introspective new EP, Can’t Get the Dark Out.

“This pandemic has been a really tough time to be alone, and it’s made it difficult to navigate changing relationships, too.," she said. "I wrote ‘Love of My Life (In My Living Room)’ about my frustration with online dating, and a few months after writing it met the love of my life through a dating app.”

Hoppenjans, who relocated from Nashville, Tennessee to pursue a doctorate in musicology at the University of Michigan, said, "By the time I met him, I’d already decided I was leaving town for my doctorate, and I wrote ‘Parallel Lines’ about the irony of meeting someone when I had one foot out the door, wanting to leave town but not him. He moved up here with me, so that worked out in the end.”

On Can’t Get the Dark Out, Hoppenjans dissects past heartbreak, navigates newfound love, and weathers interstate moves across five journal-entry-inspired tracks. The 20-minute EP seamlessly flows through alt-rock and folk-rock sensibilities with forthright lyrics.

“I feel like sometimes when we envision positive things, like love or marriage or children coming to us in the future, we think, ‘That will fix everything,’ like the struggles will evaporate once we achieve those goals. That’s just not how it works,” she said.

“Being in love has brought so much joy to my life, and it’s also one of the hardest things I’ve ever done. It doesn’t fix anything magically … all the baggage we bring with us … it haunts us in our relationships, and we work through it together.”

Hoppenjans will share her Can’t Get the Dark Out experiences and songs during a May 6 EP release show at The Bling Pig with special guests Ani Mari and Clay in the Woods.

“I’ll be joined onstage by Dave Buehrer on bass, Matt Stawinski on guitar, Jim Weyman on drums, and AJ Banta on vocals,” she said. “The band has done so well with these songs that are entirely new to them—they bring a great rock energy to the set.”

Hoppenjans brings infectious indie-rock energy to the EP’s courageous online dating opener, “Love of My Life (In My Living Room).” A thunderous fusion of drums, electric guitar, and bass push Hoppenjans outside her comfort zone as she sings, “Seems I’m well on my way to becoming Boo Radley / But I think he had the right idea, it just turned out badly.”

“I’m an introvert, and I wanted to pay homage to one of the great literary introverts/recluses with a little allusion. I found it very hard sometimes to gear myself up to go out and meet someone from a dating app–it starts to feel really pointless after a while,” said Hoppenjans, who admires To Kill a Mockingbird’s infamous protagonist and relishes staying home in the PJ Schenkel-directed video.

“I think I want to assure people that it’s OK to choose yourself," she said. "You don’t have to always be trying to go out and find someone—take a break, enjoy a night in, and learn to be in love with yourself.”

Hoppenjans also emphasizes the importance of self-love on the grungy, twangy Can’t Get the Dark Out breakup anthem “Stain.” Raw, emotive electric guitars echo her disappointment as she sings:

Clothing keeps a memory
It sets in like a stain
I can’t wear the skirt I wore the night you ripped my heart out
It’s hanging in my closet
Driving me insane
I’ve tried lemon juice and baking soda, just can’t get the dark out

“The skirt in the video is the actual skirt in the song—every word in that song happened as I say it, no creative embellishment here. I never wore it again after that night in the song, so it really just did hang in my closet and constantly remind me,” she said.

“This song is one of my favorites I’ve ever written because it was so cathartic for me to write it. I hope it helps other people experience that, too, however they choose—scream, cry, burn your ex’s photos, dance, jam, whatever it takes.”

Throughout her cathartic video for “Stain,” Hoppenjans drenches herself and that skirt in gobs of multi-colored paint. She teamed up with director and American Idol runner-up Crystal Bowersox and visual artist Samantha Zaruba to develop and record it.

“I’ll tell you what really helped exorcise the demons from that skirt was covering it in paint for the music video. Turning pain into art is like a healing alchemy—it doesn’t make the pain go away, but it helps you process and move on,” said Hoppenjans, who started playing guitar at age 10 and sought inspiration from musical theater, Jewel, Sheryl Crow, and Ani DiFranco.

“This song was particularly special because it’s one of the only times I’ve shared a song with the person I wrote it about. Despite how it might seem from my songs, I’m not actually great at expressing my emotions to the people I love,” Hoppenjans said.

“I think sharing that song with my boyfriend let him know just how conflicted I was feeling about having to leave and wanting to stay and be with him since we had actively avoided the subject to try to stay in the moment. It ended up bringing us closer together.” 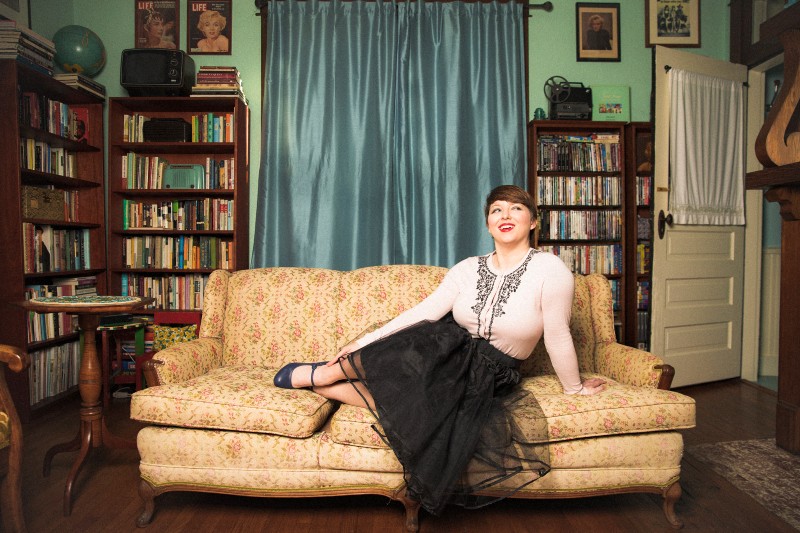 “We spent three days in the studio recording. Brandy’s big on tracking live for the live band feel and on not practicing beforehand. There’s a magic that happens when musicians play the songs for the first time—an excitement and an electricity in the discovery. If you’re not recording when that happens, you’ll never capture it again,” Hoppenjans said.

“Each one of those musicians is incredible, and I couldn’t have made the record without them. Josh, Will, and Aaron also played on my full length [2019's OK, I Feel Better Now], and Josh engineered it as well.”

In the meantime, Hoppenjans looks forward to her May 6 release of Can’t Get the Dark Out and her celebratory show at The Blind Pig. She’s also prepping for a 10-date southeast tour in June.

“I’m touring solo with electric guitar, and I’ll be playing the new EP as well as some older songs and even some new, unreleased ones. I’ve got a few new ones I’ve been working on, and I’m planning on writing a lot over the summer,” Hoppenjans said. “I don’t know when I’ll head back into the studio, but I hope sooner rather than later.”

Kelly Hoppenjans performs Friday, May 6 at The Blind Pig, 208 S. First St. in Ann Arbor, with special guests Ani Mari and Clay in the Woods.

The information you have…

The information you have posted is very useful. The sites you have referred was good. Thanks for sharing, www.windowcleanerscoquitlam.com