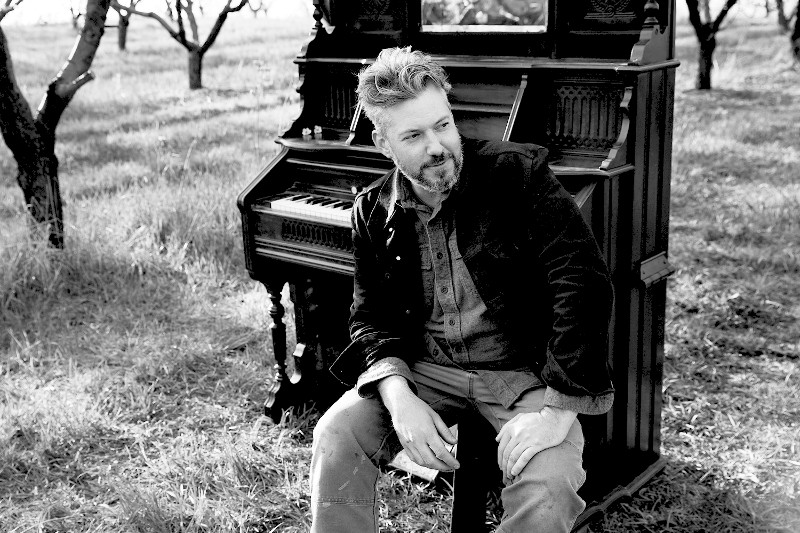 Ann Arbor singer-songwriter Chris Bathgate uses the pump organ as the sonic centerpiece on The Significance of Peaches. Photo by Misty Lyn Bergeron.

Chris Bathgate sees his first album in five years, The Significance of Peaches as "an experiment in thematic writing and recording with limitations … the significance of peaches is not necessarily the thread or some keystone idea. It is like a loose fishing net that I can cast into my life and see what I harvest."

Throughout The Significance of Peaches, released on Ann Arbor's Quite Scientific Records, Bathgate searches for a holistic sense of self while fostering a spiritual connection to the outside world using pithy lyrics and nature-rich imagery set atop a pump-organ-drenched landscape.

“The peach thing is from my total adoration for the stone fruit itself as the corporeal experience of physically eating a peach," said the Ann Arbor indie-folk singer-songwriter and multi-instrumentalist. "But I’m also interested in the peach as a metaphor throughout history. The thing I became most obsessed with was its use as a way to describe the ephemeral nature of life, time and joy, moments, and carpe diem.

“There was a time where I ... was keeping a journal and trying to describe when, where, and how I was feeling when I was eating certain peaches,” said Bathgate, who’s inspired by author Annie Dillard and poet Li-Young Lee. “I was driving around Michigan buying them up at roadside stands and driving to people that I really cared about and really loved in this carpe diem fever and saying, ‘Here, eat this … please have this sacred symbol of the pinnacle of this singular summer that we’re here together.’”

If the peach is the album's metaphorical muse, the pump organ is its sonic one.

“This specific instrument inspired the album itself. It was a little bit out of necessity, but it also spoke to me," Bathgate said. "When I sing and play with the pump organ, the pump organ itself sounds more like my voice than any other instrument I’ve played. I’m comfortable there … there’s something about it … maybe it’s because both my hands and both my feet are busy and my mind is free. It’s like a fidget spinner for musicians because you have to be engaged with your full body.”

Bathgate sketched out the album’s 10 tracks and then assembled a team of engineers and producers—Sami Perez, Adam Hirsch, Omar Akrouche, Spencer Hartling, Daniel Zott, and Jamie Hill—to help record it.

“I actually prefer not to finish anything until I’m in the recording studio. I leave things open, and I have a basic framework and have most of the lyrics written,” he said. “But then, I’ll leave some space because I’ve learned that more music can be made if you leave yourself room to experiment.”

The search for human connection is a driving force throughout Peaches and as heard on one of its singles, “Bruises.” Over pump organ, percussion, piano, and synths, Bathgate sings, “Say you love me and leave / The truth on; out in the front yard / With your bruises loud," encouraging listeners to let their hurts show.

“At this point, there’s a rhetorical way to be vulnerable that empowers and heals others and normalizes the bumps and knocks of life. In some cases, the really ugly, traumatic side of life, so that’s definitely there,” said Bathgate. “The 'truth' was also on my mind a great deal during that song … but it seemed like for a while there the truth was a really elusive thing, and in some cases dangerous, but I wanted to be around with people who were just OK with saying it.”

With “Bruises” exposed, Bathgate pleads for long-awaited closure and renewal on the forward-thinking anthem “Don’t Look Back.” Somber pump organ and contemplative percussion linger as he sings, “If I can predict that you’ll return / You could take a hint, pretend you’ve learned – / That’s something to go on.”

“The song’s inspiration is really about romantic love, but there’s this switch," Bathgate said. "It doesn’t say not to reconnect, or it doesn’t say not to connect. It just says, ‘If you’re gonna connect, be future-focused.’ If you’re not of the mind to hear that, you can hear another message of like, ‘Do not reconnect and move forward with your life.’ There are probably people in the world who need to hear both of those things.”

“I’d been frantically contacting orchards and leaving the weirdest voicemails for people," said Bathgate, who co-directed the video with Kevin Romeo and Dan Martinez. "And someone said, ‘There’s a gentleman named Fred I’m going to connect you with in Coloma, and I think he’s got the orchards you’re looking for.'

“When I reached out, he was so kind, so game, and so considerate that he brought us a couple generators and gas when our batteries were running low. He gave us entry, he showed me around, and then left us alone for the entirety of the day.”

Bathgate then trades orchards for forests on the spiritual outdoor ode “The Van,” as an ethereal pump organ and thumping percussion unveil a new path ahead. He sings, “As if there was some holy center, as if my heart were free to wander / As if I was there with me; as if I’d never leave.”

“The places that I am the calmest and the least stressed out and anxious are when I’m on a two-track [road], and there’s no one in terms of drivers. Or if I’m in the woods, and I know I’m not going to see anybody the entire day,” said Bathgate, who previously spent a summer in the Manistee National Forest and drove a mid-1990s GMC Safari van.

“‘The Van’ is an homage to that, and it’s a sister song to ‘Northern Country Trail’ because that’s the Manistee and sections up in the Upper Peninsula. It’s less of a ‘pity parade, whoa-is-me’ romantic song and more of an introspective ‘Who am I? How am I? Where am I?’ song that’s trying to leave a little bit of meaning.”

With The Significance of Peaches finished, Bathgate is turning his attention to several upcoming projects, including a covers album and a record under the name SKULLLS.

“There’s like a flavor that I’m working on," Bathgate said of the covers record, "and I’m applying it to songs that I love, some of which are very popular and some of which are barely known. I’m engaged in that experiment of how do I wish to make the song mine or what’s my interpretation of it.

“I’ve been chipping away at a SKULLLS record, which is a side project that started right before I left Grand Rapids. It’s an album about minor seconds … it’s piano-based. It definitely does not have a folk vibe. It’s got more of a jazz-marauding, dark vibe. There’s a little bit of what you might recognize as Bathgate coming through, but that’s a collaborative project with other people.”

The Significance of Peaches' album release show is June 4 September 15 at The Ark with special guest Misty Lyn. Bathgate will be backed by The Go Rounds, Samantha Cooper (vocals, fiddle, synth, aux percussion), and Patrick Booth (saxophone). [NOTE: The June 4 show at The Ark was postponed to September 15 due to covid. Bathgate is still scheduled to play June 9 with Erisy Watt and Fred Thomas at Ypsilanti's Unity Vibration Kombucha and Triple Goddess Tasting Room,]

“We’re going to play a large selection of songs from the album [at the record-release show] and some songs that I’ve selected that haven’t been performed live in a little while that I’m really interested in again right now,” said Bathgate, who will be bringing his pump organ to the show. “There’s a little bit of like, ‘This is for you because I’m pretty sure you want to hear it,’ and ‘This is for me because I want to play it,’ and ‘Here’s a bunch of new music.’”