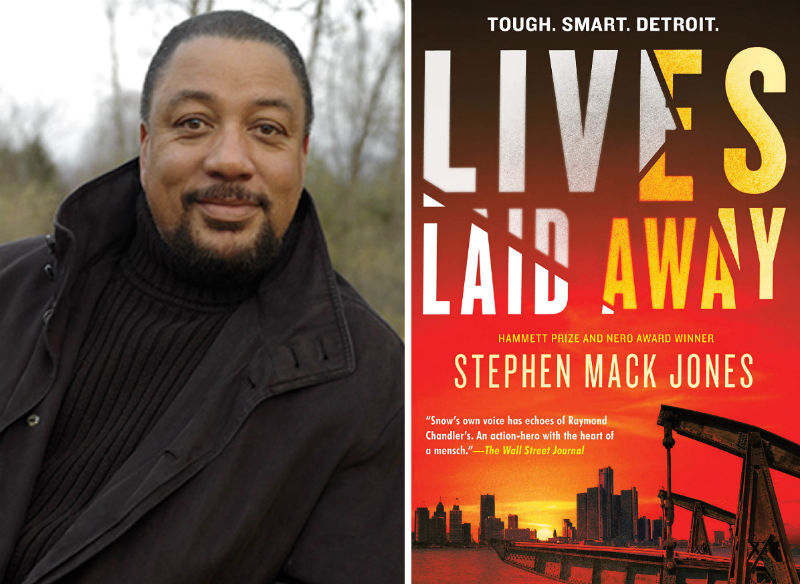 The Motor City is as much of a character as ex-police detective August Snow in Lives Laid Away, and author Stephen Mack Jones had many reasons for setting the story in Motown.

“Detroit is a very diverse city -- most people outside of Detroit don’t realize how diverse it is. They see only in terms of black and white. But … a variety of people from all over who wound up here," Jones says. "I wanted to create a character that was representative of the two largest minorities in Detroit: African-American and Mexican-American. These are two minority groups that have never really seen eye to eye. And for August, I wanted him to be the product of two cultures that have often clashed but feel no personal dichotomy. He feels he has the best of both worlds ... he has pride in both cultures. And he’s comfortable with himself. I wanted people to know that is achievable -- that you can be a product of two cultures, two peoples and be at peace with who you are.”

Lives Laid Away sees Snow tracking down the identity of a murdered woman. Inquires in his native Mexicantown neighborhood turn up details that some local authorities would rather be kept quiet, such as the fact that the woman disappeared during an ICE raid before turning up dead weeks later. The investigation takes Snow to upscale social clubs to rundown nightclubs to neo-Nazi hideouts as he tries to protect his community and learn the truth.

The cultural richness of Detroit and its residents play an important part in the books and Jones praises his publisher, Soho Press, for being committed to diversity.

“Recently the big publishers have been talking a lot about diversity in publishing, but Soho has been doing this since it was founded in 1986," Jones says. "They had no concerns at all about publishing a book set in Detroit. ... Soho has been doing diversity in publishing for three decades but had never had a book set in Detroit. They thought it was time to have that representation.” Jones adds.

Before becoming an author, Jones spent over 30 years in advertising, marketing, and communications. When asked what led to the leap into writing, he laughs: “It was either jump from advertising off of a 30-story building or jump into fiction.” Getting serious, he adds, “It is a very youth-oriented business and there’s this idea that only young people have the best ideas. I retired and spent some time being a stay-at-home parent to our youngest child. During that time, I had this story that I would take notes on and finally worked up this three-page outline that became the first book, [August Snow]."

The moniker August Snow is as striking as the character he embodies, and Jones’ wife told him the name perfectly describes how quickly August can heat up and how cool he is at the same time. Jones laughs, saying, “I told her, ‘Oh, yeah, I knew that!’ but inside my head, I’m thinking, “Oh, my God! I never thought of that!’”

The name came to Jones in an amusing manner: “One summer I was out mowing the lawn when his name just came to me: August Snow. People want to think I was in my chair, thinking weighty intellectual thoughts, but no! I was mowing the lawn! The name stuck in my head for weeks and I figured I either had to go to therapy or go write this character.”

Luckily for readers, Jones got on his computer and brought August Snow to life and now readers can know this complex character in that multifaceted city on the river.

Stephen Mack Jones reads from "Lives Laid Away" at Literati on Friday, January 18 at 7 pm.

honest and beautiful interview, thanks an article!
www.19216811ip.mobi