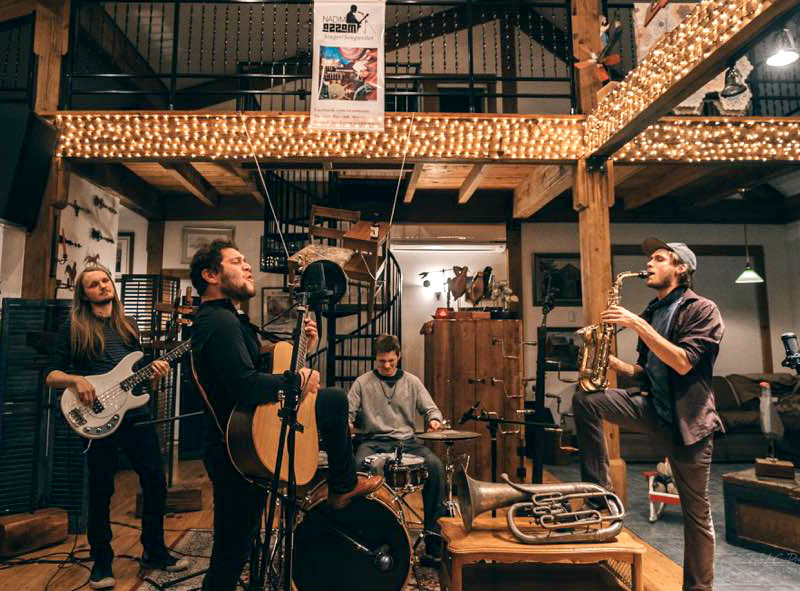 Nadim Azzam's “On the Edge” from the new EP

“I was always a big fan of hip-hop, but I also grew up a Beatles fan, a Guns N’ Roses fan,” the longtime Ann Arborite said in a recent interview. He started out playing electric guitar, but the singer-songwriter side of his sound started to come together while he was at boarding school, where the only ways to make music were an acoustic guitar and his own voice.

An internship at Detroit hip-hop studio XO Productions brought him up-close exposure to that side of music and made him some business connections, leading to his initial album and eventually a slot opening on tour for Matisyahu.

Most recently, Azzam has been playing with a band consisting of Jacob LaChance on sax, Chris Robbins on drums, and Sam Collins on bass. That’s the band featured on his new EP, physical copies of which will be on sale at Friday’s show. A digital release of the new songs is planned in the near future as well.

“They all have a lot of personal meaning,” Azzam says of the songs on the EP. “Cup of Liquor” is about overcoming struggles in relationships. “Out of Air” is a memorial to a late friend. Azzam said “No More” is his favorite musically; it’s partly a cover of Allen Stone’s “Unaware” with original elements.

The acoustic pop/hip-hop blend features throughout the EP. “The raps come the easiest for me. I think I’m a better rapper than singer,” Azzam said. “I think in rhythm, and then it’s just about filling in the words.”

Azzam plans another new recording before the end of the year, this time with more electronic elements. “I’m really focused now on moving forward with electronic music,” he said. “The future is both.”

This week, however, the focus is on his acoustic pop sound. “For anyone who’s seen us live and enjoyed the band, this EP is the culmination of it,” he said. “This is for them.”

Nadim Azzam will play an EP release party at 9 pm on Friday, March 15 at The Blind Pig. All-ages show; cover is $10. The Stellars, The Hacky Turtles, and Ossi Music open. CDs will be available at the show and the EP hits streaming services in April. Follow Azzam on Facebook, Instagram, Twitter, and nadimazzam.com.