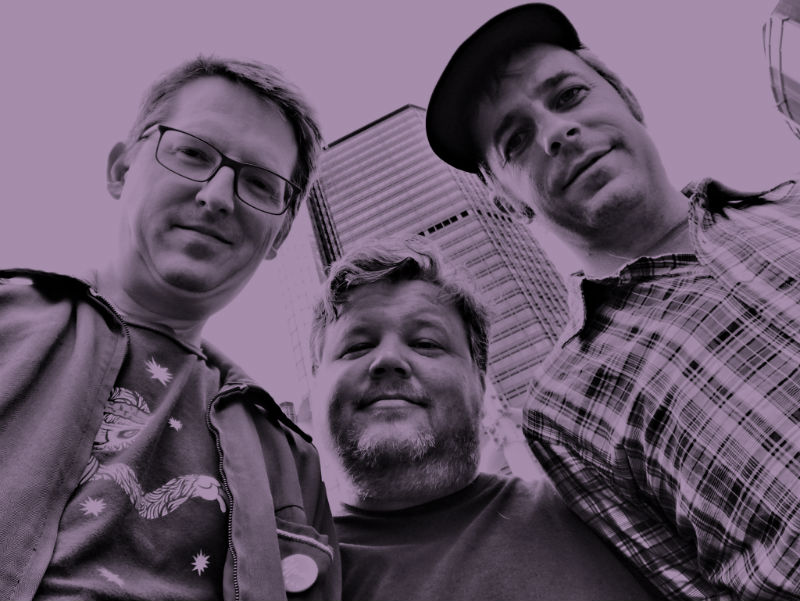 The local band Fangs and Twang may have started out as a joke, but it’s turned out to be a really good one.

Combining a rootsy, country-rock sound -- that’s the “twang” -- with songs about monsters and other scary things -- that’s the “fangs” -- the band has been sharpening its sound for the past four years, releasing three albums along the way.

The core band consists of Joe Bertoletti on bass, Andy Benes on guitar and mandolin, and Billy LaLonde on drums. All three contribute vocals, and the band's sound is augmented by keyboards and fiddle on the album. “This band is all about collaboration and I'm really proud that this collaboration also extends to vocal duties,” Benes says.

Their latest album, the just-released Spirits and Chasers, perfectly balances Fangs and Twang’s offbeat outlook with the members’ first-rate musical chops. The band will celebrate the new album with a record-release show April 27 at Ziggy’s in Ypsilanti.

The title track on the new album is a standout, featuring some clever lyrics over a gritty roots-rock sound. “The Ballad of the Legend of the Saga of Swamp Thing” encapsulates the band’s goofy sense of humor. The infectious “Ogo Pogo” sounds like straightforward country, with a long instrumental intro that showcases the band’s instrumental abilities. The album’s six original songs are rounded out by a perfectly-on-point cover of Blue Oyster Cult’s “Godzilla.”

The band members jointly answered a few questions via email:

Q: How did the band first get together?
A: Fangs and Twang started as a joke at a jam session. Someone was talking about writing a song about a vampire, and Bill said, “You should do it in a country style!,” and rattled off some lyrics about a vampire who was a gentleman, causing a big laugh. From there, Joe, Andy, and Bill -- who had been looking to do something fun with more songwriting opportunity -- started to play around with it, and before you know it, we had written “Part Time Vampire” and “Transylvania Tennessee,” from the first record.

Q: Your original songs are credited to the full band -- what’s your approach to songwriting?
A: The songs are really collaborative between the three of us. For the music, I (Andy) usually have a chord progression or a couple riffs that I've been developing. I'll bring that to the band and we'll jam on that for awhile and create a verse and chorus type structure.

At this point, we'll start talking about a funny idea that fits the concept; i.e., pick a monster, then pick a country song trope to match up with what we have been working out musically.

"Country Metal" is a good example of this. I had the metal-style riff and was fooling around with combining that with a country-style guitar lick. I showed this to the guys and it quickly became a take on the duet style -- "I'm a little bit country, I'm a little bit rock 'n' roll." We then brought in the monster element, the Michigan Dogman (or dog person), which gave us the excuse to make lots of dog jokes and puns, and voila, a new Fangs and Twang song is born.

Usually songs get developed this way, but not always. I guess our songwriting style is still evolving, but the one constant is that the songs have to stick to the band concept.

Q: “Spirits and Chasers” is really clever. How did that song come about?
A: I (Bill) wrote the lyrics on the way back from a trip to Nashville with some old, dear friends, and it just came out. Lots of good music, good times, and great memories relived that weekend. It was written on a heart filled with love. The reconnection with old friends, and all that comes with it ... and lots of spirits ... and a few chasers.

Q: Whose idea was it to cover “Godzilla”?
A: I (Bill) don’t remember who had the idea to cover it, but it’s a lot of fun to play! If you’re going to be in a band who performs songs exclusively about monsters, then it’s a given: Godzilla is the King of the Monsters! We put our own special twangy take on it.

Q: What can the audience expect at the record release show?
A: We have some guests joining us for the show. Both fiddle players that appear on this album, Mark Wallace and Colin Murphy, will be there. Loren Kranz, who plays organ and piano on the album, unfortunately has a prior commitment and can't make it, which is sad because he is the secret weapon on this album.

We will play every track from the album (although not in order) and mix in some of our faves from our first two CDs. Not many cover songs planned, but we do have a surprise cover song planned that really fits the venue, and we'll just leave it at that!

Fangs and Twang play a record release show at Ziggy’s in Ypsilanti on April 27 with the Jim Roll Band and Child Sleep. Details here.