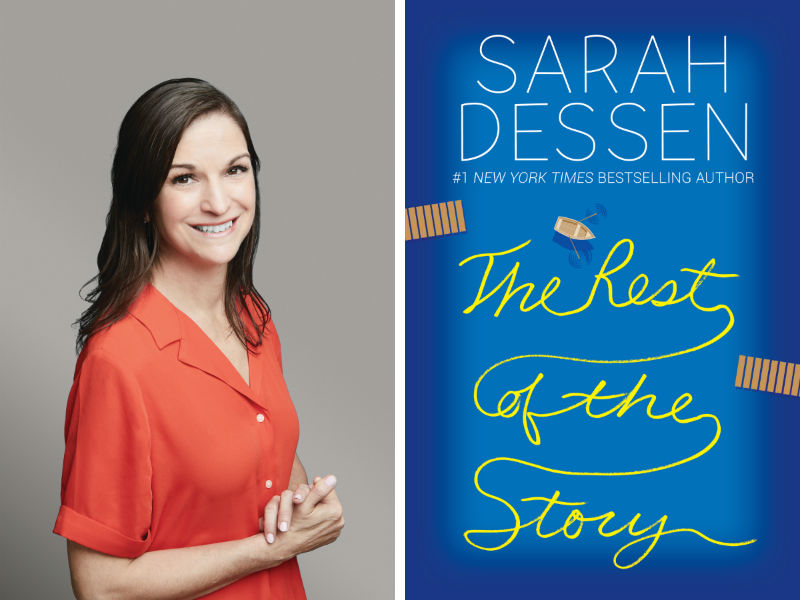 There are those summers -- or seasons in general -- when it feels like everything changes. Perhaps you change, someone else changes, or something about your environment shifts.

The Rest of the Story, the new young adult novel by Sarah Dessen, tells the story of one such pivotal summer. The main character, Emma Saylor, finds herself confronting family history when she has to spend several weeks with her mother’s side of the family, whom she barely knows. There at the family business, a hotel on a lake, she forms new relationships, learns about her family’s past, and expands outside of her identity as she knows it.

She will speak, answer questions, and sign books at the Ann Arbor District Library’s downtown location, 4th-floor conference room, on Tuesday, June 11, at 7 pm. (The reading was previously scheduled at Literati Bookstore but moved to the Downtown Library owing to demand.) Pulp had the chance to ask Dessen a few questions.

Q: What is it about summer as a setting that interests you as a writer?
A: When I was a teen, it seemed like so much could happen in those three months between the end of the school year and when the new one began. People changed, had new experiences. Summer is all about what COULD happen, and anything can. As a writer, I can’t resist that.

Q: As you describe about summer, The Rest of the Story contains many realizations and new experiences for Emma Saylor. She discovers stories about her family, especially about her late mother, that she has never heard before. She has her first kiss. She tries drinking for the first time. She sees her life with new eyes and through the lens of the class differences on the lake. These are intense situations. How do you approach serious or dangerous topics when writing for young adults?
A: When I’m drafting a novel, I just try to lose myself in the voice. I can’t worry about anything but that. Stephen King has a great quote in his book On Writing: “Write with the door closed, rewrite with the door open.” It’s in the editing that I start thinking about how things will affect the reader, and also when my editor and other readers get involved so I can be sure I’m handling things the best way I can. When I was younger, I hated revising. Now I can’t imagine my work without it.

Q: Let’s talk more about the voice. Emma Saylor and her father have been on their own for years since Waverly, their mother and wife, respectively, passed away. The two of them clash about decisions that Emma Saylor is making. Tell us about this dynamic. Did you draw on your experiences as a parent?
A: Absolutely. As a parent, all you care about is protecting your kid. Emma Saylor’s dad only wants her to be safe and okay. But sometimes you have to face scary stuff to write your own story. As a mom, I want to make everything easier for my daughter than it was for me. But she needs to grow and learn on her own. Letting her do that is my job, too.

Q: Facing “scary stuff” is difficult. In a moment when she has to choose between anxiety or adventure, Emma Saylor reflects, “You can make your life, or life can make you. Was it really that simple of a choice?” This truth feels harder in practice than it sounds. In what ways do you relate to Emma Saylor?
A: I think of all my narrators, Emma Saylor is the one most like me at this point in my life. I’ve written so many books about mothers and daughters and the dynamic there. Before The Rest of the Story, I even started another book about just that, but it imploded as soon as I brought the mom in. Our stories begin with our parents: these people met, and they had me. But I was ready, I think, to think more about how the daughter tells her story. Maybe because I’m finally ready to tell mine.

Q: This being your 14th novel, I imagine you have found things that work well in your writing routine and process. When do you like to write? How much do you plan the plot ahead of time, or do you simply dive into writing?
A: I’ve always written in the afternoons, because after college when I first started writing novels, I had two jobs: an assistant to the writer Lee Smith in the morning and waitressing at the Flying Burrito in the evenings. So I wrote from 3-4:30 every day and trained my brain to do that. It’s been my routine for years, like the fact I never start a book until I have my “skeleton”: the first scene, climactic scene, last scene, and first line. I need a roadmap, but not too detailed of one. You have to leave room for those moments when something perfect just appears.

Because I started this book late, though, I didn’t have the luxury of doing any of this. I had no plan and needed to double time, so I wrote whenever I could, all over town. Coffee shops. School parking lots. Tae Kwon Do bleachers. It was good for me, actually. Although writing a book this long in four months is rough. I wouldn’t recommend it!

Q: What books are you recommending to friends and fans this summer?
A: Right now I am loving Celeste Ng’s Little Fires Everywhere, which is just about the perfect novel as far as I am concerned. She writes contemporary fiction but does teens VERY well, so if you like that, check out her first one, Everything I Never Told You. In nonfiction, I am racing through Lori Gottlieb’s Maybe You Should Talk to Someone, which is a great book about therapy, understanding, and being human. Plus, it’s funny! In YA, I am loving Ibi Zoboi’s Pride, which is a modern retelling of Pride and Prejudice set in Brooklyn with an Afro-Latino narrator. It makes the English major in me so happy!

Q: You are at the beginning of a book tour spanning June and July. What do you like about being on tour? What do you learn from your fans?
A: The best part of tour is absolutely meeting the readers. But the travel can be grueling, and being gone from home has gotten a lot harder since I had my daughter. I mean, before her, I missed my husband and dogs, but being away from her, especially for long stretches, makes me feel just SO guilty. But then I’ll have someone come through the line with a tattoo of a quote from one of my books, or a story about how Dreamland really helped them, and I know I couldn’t get that sitting at home. So it’s a balance, like everything else.

Q: In other interviews, you’ve written about questioning whether you’ll still write after composing numerous novels. Is a break in store next, or might there be another novel floating around in your mind?
A: I honestly have no idea! I have never been someone who can write one book while promoting another. If I follow my “schedule” (I call it that because it never runs right), I’m supposed to start something in January. Right now that seems about as likely as me becoming a brain surgeon, but writing always surprises me. Stay tuned!

Literati presents Sarah Dessen reading and signing her novel "The Rest of the Story" at the Ann Arbor District Library’s downtown location, 4th-floor conference room, on Tuesday, June 11, at 7 pm.