To the Beat of Their Own Drummer: The Rasa Dance and Theater Festival spins off to highlight works from India 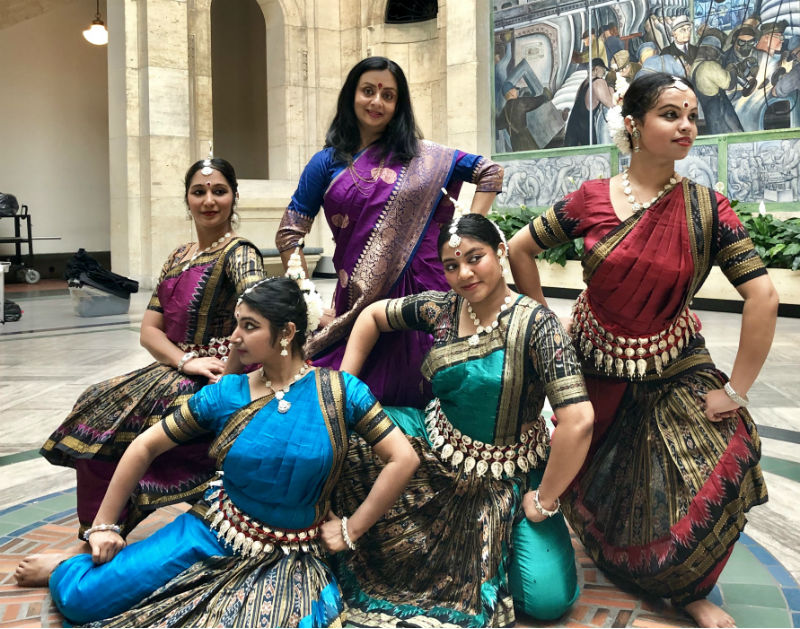 Sometimes a multi-arts celebration does such a good job at presenting its multiple arts -- dance, theater and musical performances, visual arts exhibitions, literary events, film festivals, and culinary showcases in the case of Akshara's India-inspired Rasa Festival -- that it has to split itself up just so those interested can find the time to attend.

Rasa has filled venues in Washtenaw County every September and early October since its 2017 inception, but Ann Arbor's Sreyashi Dey -- dancer and president and artistic director of Akshara -- admits the dozens of high-quality events the festival presents became something of a traffic jam.

"What we were finding is that everything being concentrated and focused on in one month left a lot of people out even though they were interested in various events," she said. "There's always conflict and it's a busy time when people are coming back to school and other things are picking up."

The Rasa Festival will still be roaring throughout September 2019, but some of the dance and theater elements now have their own summer spotlight. On June 15, three dances and one dastangoi (storytelling) performance will happen at Riverside Arts Center in Ypsilanti, with many of the works featuring a strong feminist point of view. (There will still be some dance mixed into the fall fest, too.)

Dastangoi is an ancient Urdu oral storytelling art form, but "Bitch" by Mrinal Pande is a modern feminist piece of short fiction first published by The Little Magazine in 2001 that explores old traditions still affecting Indian society. It's a short but powerful commentary on marriage, class, misogyny, and superstitions that was adapted by Alka Sharma (Mandi Theater Chicago), who will perform it with Ann Arbor's Jill Halpern. The story was originally written in Hindi and that's the language in which Sharma was going to perform it, but Dey was worried about the context of the performance.

"For a mixed, intercultural audience it's going to be really hard because they won't understand the language and it will be really difficult to sit through, say, 20 minutes of a storytelling performance," Dey said. "And different parts of India have different languages and not everybody from India follows Hindi. ... It doesn't matter how interesting it looks and how much expression and gestures you put into it, if they're not understanding the language it's going to be very hard."

That's when Dey suggested Sharma bring an English language element to the dastangoi.

"It occurred to me that perhaps we could -- and this has not been done before -- that perhaps we could have a storyteller also perform with [Sharma]. Typically, this [dastangoi] form has two people who sit on the floor and ... kind of have a dialogue with each other and have a dialogue with the audience. ... It's kind of like an interactive performance form. So I said, 'OK, instead of two people doing that in Hindi, why don't we have one put it in English and one in Hindi to narrate the story?'"

Dancing will take over the rest of the evening, with a wide range of styles represented among the three performances.

"There are a total of eight different classical dance styles and they're from all different parts of India," Dey said.

But unlike the classical musical styles in India, which are usually categorized as Hindustani (Northern) and Carnatic (Southern) traditions, there's no hard split among the dances from various regions.

As in a raga, where the melodic and harmonic outlines of the tune are defined but the performer has a wide berth for interpretation and improvisation, the same is true for classical dances -- to an extent.

"Yes and no. There is always freedom to interpret, but usually for the traditional choreography, they're set to certain music and the melodic and rhythmic patterns," Dey said. "Especially the ones that have been choreographed by the old masters ... we just perform them as they were taught and they were handed down over the generations. So there is this idea of preserving those good choreographies as is."

Dey's headlining dance with the Akshara Ensemble will consist of three segments focused on elements from the odissi dance style, including Naba Durga -- an invocation of the goddess Durga, who represents female strength in Hindu mythology -- and Basant Pallavi, which is based fully on the rhythmic and melodic structure of the music by Guru Bhubaneswar Mishra. The opening segment, Bajuchi Sahi, is in the abhinaya style, which is an expressionist odissi dance. The work narrates the Radha-Krishna love story and it's a place where Dey can play within the frameworks of tradition while putting her own spin on the odissi moves, which Dey described as "marked by sculptural poses from temple carvings" in a Pulp piece from 2017.

But many of the odissi dances -- and other styles -- are modern interpretations of what the artists think the works may have been like in their original forms.

"We have the ancient carvings and what we have read in various texts is that there were dance styles back 2,000 years ago," Dey said. "But it's hard for us today to really know what those dances were like even though there are texts that talk about different aspects of those performances. ... In the text, there are some specific dance techniques that that talk about all the hand gestures and eye movements and feet position and all of that."

Additionally, some of the oral histories about Indian classical dances were lost due to the country's period of British colonialism.

"A lot of these classical dance styles were dead and had to be revived because what happened over 200 years with the colonial rule," Dey said. "So in the case of odissi, for example, through the revival process, teachers were looking at the temples' sculptures and incorporating them directly into the dance style and into the repertoire. ... They sat with the music that existed and also some living traditions that existed and put the dance act together that we see today."

India's more liberal and progressive arts and culture were routinely suppressed by the colonialists' repressed rulers, who couldn't wrap their puritanical heads around dances that celebrated the human form and the things that can be done with it.

"The human body, with sexuality, with the themes of love and passion and sensuality -- all of those which were celebrated in India in the temple cultures," Dey said. "The deeper idea was one of transcending the physical body through the yearning of the human soul for union with the divine. There were many traditions of men dancing in female costumes and female makeup, an idea which was unthinkable for the British. There wasn't that kind of stigma associated with it [in India], but if you look at Shakespeare's plays and all that you know men performed as women."

Speaking of which, Kasi Aysola works in the classical bharata natyam dance style, which was historically associated with women, though a male guru typically taught them the dances. Aysola will perform two pieces that are influenced by nature: Allaripu, which features limb movements inspired by the blossoming of a lotus flower, and Water. Aysola will conclude with Thillana, which explores the nuances of melody and rhythm in Lalgudi Jayaraman's composition through a variety of technical dance moves.

The evening's concluding dance, Chandalika – Daughter of Earth, is wrapped around an intense story -- Shakespearian, even -- which is not surprising considering the story and music is by Nobel Laureate Rabindranath Tagore, who based it on a Buddhist legend. Prakriti, an untouchable, has her consciousness raised about women's rights by a monk who blesses her with water, which gives her the sensation of a new birth, caste be damned. But things don't go so well once Prakriti's mother casts a spell on the monk to fill him with unwanted desire for her daughter. Pittsburgh's Nandini Mandal and the Nandanik Ensemble have created new choreography for the story based on classical movements from the navanritya and rabendrik styles of dance.

This entire event runs 2.5 hours, and as you can see, a tremendous amount of artistry will be presented in that compacted period. You can understand why the Rasa Dance and Theater Festival can -- and deserves to -- stand on its own.

Christopher Porter is a library technician and the editor of Pulp

The Rasa Dance and Theater Festival is Saturday, June 15, 3-5:30 pm at Riverside Arts Center, 76 N. Huron St., Ypsilanti. Tickets are $25 general, $15 students and seniors, and are available at a2tix.com. Visit rasafestival.org for more information on this event at the fall portion of the fest. The order of performers is Kasi Aysola, Sreyashi Dey and the Akshara Ensemble, Alka Sharma and Mandi Theater in collaboration with Jill Halpern, and Nandini Mandal and Nandanik Ensemble.