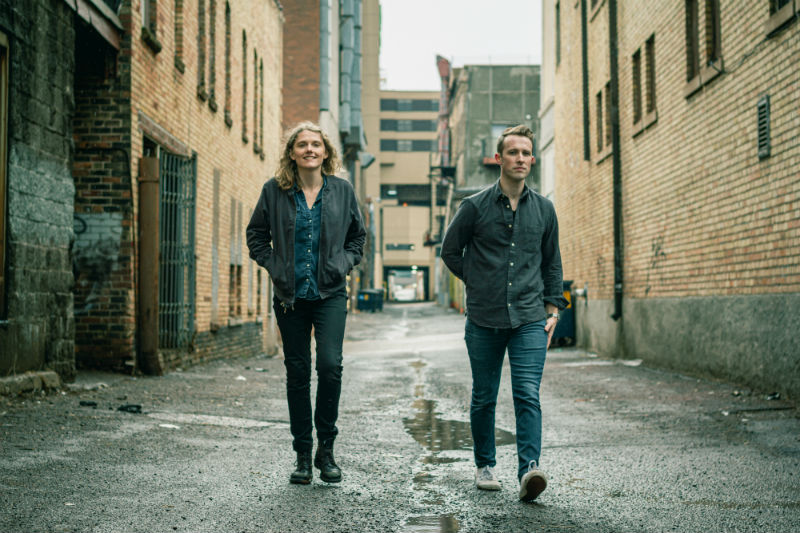 Music from the indie-folk and Americana band Dead Horses grapples with hope and pain -- how to reconcile sorrows and desires -- through both songwriting and sound. Lyrics on the 2018 album, My Mother the Moon, draw on frontwoman Sarah Vos’ life story, including experiencing an unsettling childhood and finding her way as an adult, as well as her observations as a musician. The track “Turntable” offers this image:

Oh, she said, “If my heart was a turntable,
And my belly was the speaker and my soul the needle.”

These are the kind of songs in which you can hear something new each time you listen. Finding autonomy and self, acknowledging hurt and struggles, recognizing social issues, interacting with nature, and looking hopefully to the future all figure into this album.

Most recently, Dead Horses, started by Vos and bassist Daniel Wolff, is releasing a series of singles, which will appear on an EP next year. Their latest one, “Birds Can Write the Chorus,” embraces possibility, as “it’s never what I thought it was; it’s never too late,” according to the lyrics.

Dead Horses play The Ark on Wednesday, December 4, with doors opening at 7:30 pm and the show starting at 8 pm. Vos and Wolff responded to questions by email beforehand.

Q: How did you two meet? When did you decide to pursue music? How long have you been playing together?
WOLFF: In 2008, I met two brothers at an open jam in the back of the now-defunct Sacred Circle Spirit Shop on the south side of downtown Oshkosh, Wisconsin. We started putting songs together to play out and had a lot of fun bouncing around Central Wisconsin on occasional weekends. That project fizzled out sometime in 2009.

But, in early 2010, we decided to get back together and start another project. One of the brothers knew Sarah Vos from high school where they actually had played music together. He ran into her after her move back to Oshkosh and invited her to join the rehearsal at my place. Sarah accepted, and it really clicked right from the beginning. We all stayed focused on learning and writing new material for a weekly show in Oshkosh, and we naturally started just getting more offers to play for people at other bars, restaurants, or private parties. We started reaching out to places on our own to solidify gigs in parts around Wisconsin, as well. I also dropped out of college in early 2009, just prior to the formation of Dead Horses. Music was something we both really wanted to pursue, but I think both Sarah and I didn’t picture it happening in this way. As of now, we’ve been playing music as Dead Horses for nearly 10 years.

Q: Your online bio says that your band name, Dead Horses, pays homage to a friend who overdosed. Tell us about the name.
VOS: As the opioid epidemic in America has become more and more significant since we named the band in 2010, we’ve felt it more important to express the meaning behind our band name -- Dead Horses -- which came about in memory of a friend who passed away of a heroin overdose right around the time we formed. Opioid addiction and abuse affect people across socioeconomic levels. It also speaks to a looming problem that we have in our country of companies getting away with very serious wrongs because they can buy themselves out of trouble. It has been heartening in recent months to hear about states holding some of these companies accountable and lawsuits that result in a higher accountability for the companies, as well as money being poured into creating resources for people, families, and communities facing this very real struggle.

Q: Turning to your music, Wolff learned the double bass for the band, and Vos sings vocals and plays the guitar. What do you like about these instruments? What other instruments do you use?
WOLFF: I think this instrumentation is a perfect basis to build upon. They may seem limiting at times, but I believe we’ve found (and are continuing to find) ways to broaden the scope in which we use them. This became more apparent when Sarah and I started performing as a duo. Sarah also plays electric guitar, which steers the sound in new and exciting ways. When we bring a larger ensemble to shows, we use anything from violin to cello, flute, and/or mandolin. We also tour regularly with a drummer.

Q: Your quintet will play at The Ark. Who is in the quintet aside from you two? What keeps you coming back to Ann Arbor and The Ark, including playing in the 41st annual Ann Arbor Folk Festival in 2018?
WOLFF: The quintet will feature Oliva Dobbs on flute, Viktor Brusabardis on cello, and James Gallagher on drums. I really like the listening room environment that The Ark employs. Our first performance was in September 2016, and The Ark and their staff have always been fully supportive of our return each year. The Folk Festival in 2018 was such a fun event to be a part of. It’s great to see communities supporting live music and art in the way The Ark does.

Q: You recorded your 2016 album, Cartoon Moon, with Ken Coomer, formerly of Wilco and Uncle Tupelo, in Nashville. How did this recording session differ from others? How did it influence your music?
WOLFF: The recording session for Cartoon Moon was our second time working in a professional studio with a producer. However, Ken Coomer was the first producer to really help guide and develop a sound for us on a recording. He had critical thoughts and notes on song structure, as well as instrumentation. He called on several great players in Nashville to come in during these sessions and record parts on piano, violin, and banjo. His artistic outlook on our music during those sessions is something that I feel we are still using to this day when Sarah and I enter studios to record.

Q: Cartoon Moon and your 2018 album, My Mother the Moon, both contain the word “moon.” What is the significance of the moon?
VOS: Many people for thousands of years before us have acknowledged mythology and symbolism behind the moon. It’s hard for me to express exactly what its significance is to me, but the moon phases represent the different cycles and seasons we also go through within our lives. They represent a sort of birth and death that we all experience in our own ways. The moon also reminds me of connectivity to one another and the world around us.

Q: Your lyrics are personal and tied to Vos’ life story and perspectives. How do your life and music connect? How do you go about composing lyrics? How have your lyrics changed over time and albums?
VOS: I agree that the lyrics are very personal to me. Oftentimes, writing feels like a way to put genuine thought (or maybe non-thought) into a safe space, which happens to be within a song. Songwriting, and writing in general, have been a therapy and a practice for me.

Q: One of your songs, “Swinger in the Trees,” on My Mother the Moon refers to the Robert Frost poem “Birches,” in which the speaker longs to climb trees and then drop back to the ground by weighing the top down. The Dead Horses’ lyrics express, “There is always hope (I wanna be) / A swinger in the trees.” What drew you to this poem? How does it relate to your song?
VOS: Yes, this is one of my favorite poems! Being from the Midwest, I think the snowy scene, the trees, the simplicity of the language, the longing for the sweetness and carelessness of being a child really resonate with me. There are also such poignant and relatable sentiments in that poem, like:

I’d like to get away from earth awhile
And then come back to it and begin over.
May no fate willfully misunderstand me
And half grant what I wish and snatch me away
Not to return. Earth’s the right place for love:
I don’t know where it’s likely to go better.

I think that acknowledgement of the suffering in life, the injustices, and the stubborn optimism (hope) that goes hand-in-hand with it is worth proclaiming.

Q: On September 8, 2019, Dead Horses opened for The Who on their Moving On! Tour at Alpine Valley Music Theatre in Wisconsin. How did you become their opener? What was this experience like?
WOLFF: Dead Horses was offered to open for The Who this last September after their management team found out about us online. Apparently, they were looking specifically for a band in Wisconsin to open this show. We were playing in Baton Rouge, Louisiana at a crawfish boil when we found out! We eagerly accepted the offer, and that was that. Pete Townshend also gave accolades to our song “All I Really Need to Know” in an interview regarding their then forthcoming visit to Alpine Valley. That was pretty surreal! It was an incredible experience to play a historic venue like Alpine Valley and with such an iconic rock 'n' roll band as The Who. They still perform their hearts out each night. It’s very inspiring to watch!

Q: As a Milwaukee-based band, how does the city, state, and Midwest figure into your music, if at all? What keeps you going back there?
VOS: We cut our teeth traveling all over rural and urban parts of the Midwest, and that has been, and continues to be, a huge part of who we are as a band. While first getting going, we were able to book ourselves consistently throughout the year by playing a mix of festivals, bars and breweries, small theaters, house concerts, and some other strange shows. More recently, we have started touring nationally, away from our home region.

Now don’t get me wrong, there is an amazing community of musicians throughout the Midwest, but it seems we’re all farther apart from each other geographically than musicians on the coasts. Sometimes this feels like a disadvantage, being farther away from resources that could be helpful to us as a growing band. At the same time, I can’t say how grateful I am for the amazingly supportive communities around the Midwest that have helped us grow into who we are today. It’s humbling -- in an emotional way -- to think about all the folks who have supported us by coming to shows, buying records, welcoming us into their homes, sharing food and conversation and community with us. Also, let me say that I love the space here in the Midwest, and I love the lakes, and I love the people.

Q: Your next release will be an EP, tentatively scheduled for February 2020. Dead Horses has released some singles from it, including “Family Tapes,” “Mighty Storm,” and, most recently, “Birds Can Write the Chorus.” What’s new in these songs? Will you play new tunes at The Ark?
WOLFF: We certainly will be playing some of these songs at the upcoming show. We are very excited to be playing new music, and it’s always interesting to see how the songs take shape in a live setting compared to the studio recording. There were a couple different approaches to these songs as they were being written. Sarah wrote lyrics and song form for the majority, and then we would meet up and work out other parts by adding or subtracting certain things. We also demoed these at home which is a very useful way to be a little more prepared for the studio. One of the tracks is an instrumental tune, which is also a first for us.

Dead Horses play The Ark on Wednesday, December 4, with doors opening at 7:30 pm and the show starting at 8 pm.