Patti F. Smith taps into the stories of brewpubs, brewers, and their beers in her new book, "Michigan Beer: A Heady History" 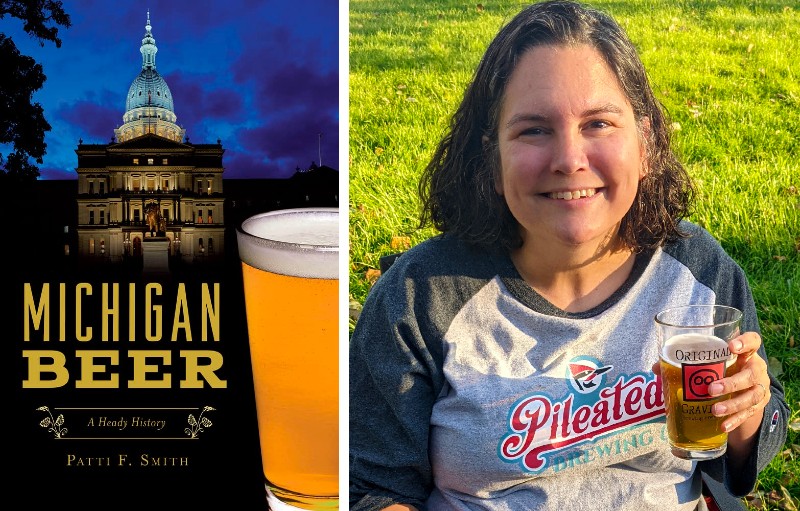 Patti F. Smith's introduction in her new book, Michigan Beer: A Heady History, may activate your thirst to take a seat at one of the state's many current establishments:

Like the waves that crash in the magnificent Great Lakes that surround Michigan, beer and brewing has constantly moved and evolved in the state. […] Come along on a trip through the history of Michigan’s brewers and beer as we explore, region by region, the history of brewing in our great state.

But Michigan Beer reports on mainly pre-World War II businesses and their beverages. Smith highlights the “first wave of brewers” who came to the U.S. from countries like Germany and Prussia. She also describes the “second wave” who endured or sprung up after Prohibition and also struggled during WWII. The “new wave” gets a dedicated chapter at the end of the book regarding breweries in the 1980s and onward.

Michigan Beer is organized by regions of the state: the Upper Peninsula, Western Michigan, Mid-Michigan, Eastern Michigan, and Southeast Lower Michigan, plus the “new wave” not divvied up by location. Each chapter spotlights numerous corners of the state from Copper County and Escanaba to Grand Rapids and Detroit, with many more cities showcased. Readers can look up their hometown, college town, or favorite vacation spot and see what breweries were once pouring there.

Some breweries are predecessors of existing ones or are continuing on in some way, possibly carrying on the name or using the building. Others are gone to the sands of time. Sleder’s in Traverse City still operates as a restaurant. Stroh’s beer of Stroh Brewing Company in Detroit continues to be produced, though purchased from the family in 1999. In addition to the places and dates when the breweries existed, human interest stories are sprinkled throughout. The Prohibition was not the only event that put breweries over a barrel. The lure of the Gold Rush, tragedies like fires and shipwrecks, feuds between business partners, and economic downturns took their toll.

This long history of the beverage, businesses, and people involved shows Michigan’s seat at the bar in brewing. As Smith points out, the COVID-19 pandemic has caused another shake-up, but with more than 300 breweries around the state, the history continues brewing.

The Ann Arbor-based Smith is a special education teacher and writer, including writing for Pulp, and author of the history books Vanishing Ann Arbor and A History of Ann Arbor's People's Food Co-Op. We spoke about why she chose to write about beer, writing during the pandemic, research for Michigan Beer, and what’s next. She'll be giving numerous talks at book stores, libraries, and breweries across Michigan this summer.

Q: How did you come to live and write in Ann Arbor? Please tell us about yourself.
A: I wanted to live in Ann Arbor since I was a kid but unlike most people, I didn’t come here to go to college. I made the move in 2001 when I was still practicing law in Detroit. Never regretted it since.

Q: Why did you decide to write a book on the history of beer and breweries in Michigan?
A: I am most definitely a late bloomer in most things—including beer and history. I fell in love with local history years ago while sitting in the Screening Room in the Michigan Theater. I realized that all of those magical theaters around the top of the room were gone forever, and it made me realize how incredibly important it is to honor and remember those who came before us. I started writing about local history, which led to history books. As for beer, I never drank it until I was in my 20s. I discovered craft beer at the late, great Leopold Brothers. I found out that beer could have an actual taste instead of just [the] drinking “cold” [flavor] of the macro beers. I started writing about beer about 10 years ago. One day I thought I should mix the two loves together and here we are.

Q: Michigan Beer mainly focuses on historical breweries and their beers, with a short chapter at the end about the “new wave” of current breweries. How did you narrow the scope of the book to focus on pre-2000s breweries and often much earlier?
A: The publisher [Arcadia] likes to focus on pre-World War II era so having that extra chapter was a special treat. I wanted to honor the folks who started us on the road to the great craft beer scene that we have today.

Q: You note that you pitched this book to your editor and started it all during the pandemic. Could you elaborate on what ways the pandemic changed your writing of this book?
A: I finally got it together to get the proposal written and submitted in early March 2020. I even remember my editor saying something like, “Hey, is anything happening in Michigan?” and I was like, “No,” and then BOOM! My original intent had been to go to towns around the state, research at libraries, and talk to brewpubs and historical societies, but of course, that wasn’t possible with the shutdowns. Even reaching out to people was problematic because so many historical societies are volunteer-run and weren’t open and breweries had way more important things to do. So it changed the entire way that I went about researching—almost everything was done online, along with some reference books.

Q: How did you go about researching and getting photographs for this book?
A: I started with the Detroit Public Library, which has amazing resources. Then I went to other libraries and historical societies to ask permission. I also found some websites devoted to old breweries, and those folks were super helpful. Stephen Johnson, who wrote Detroit Beer, kindly shared his pictures of memorabilia with me.

Q: From your book, I learned that prohibition had a chilling effect on the breweries and their beers, and many did not survive. The stories about the people who owned and operated the breweries are likewise fascinating. What facts and stories captivated you? How did you choose what to include or not in this book?
A: Choosing what to include and not to was tough. When writing a book like this, you have a minimum number and a maximum number of words, and they aren’t very far apart. So I had to find the stories of the people who interested me the most. Sometimes I would find a little bit of information but couldn’t find any more so that ended that. I really enjoyed stories about how families would help—and sometimes compete—against each other. Probably my favorites are the Weinmanns from Lansing. They had the brewery/saloon/beer garden with the “lusty Germans” singing songs well into the night. What fun!

Q: The names of the beers, from Castle Brew to Northern Beauty Beer and Fawn’s Milk, sprinkled throughout the book stand out as unique and descriptive. The name Silver Foam seems to come up frequently throughout Michigan’s history with beer. Did you have any favorite beers that you encountered? How did you find the names?
A: I liked the Fawn’s Milk—beer for old stags!—and Koppitz’s Victory Beer. Some of the breweries went all in for WWII

Q: What books are you reading and recommending right now?
A: Sadly nothing beer-related! I started reading Agatha Christie books during the pandemic, and so I am still working my way through those.

Q: You have written several books on topics related to Ann Arbor’s history and now one on beer throughout Michigan. What is next for you?
A: I’m going to be doing a lot of public speaking engagements this summer. I can’t wait! As for writing, I haven’t decided yet but I’m always on the lookout.