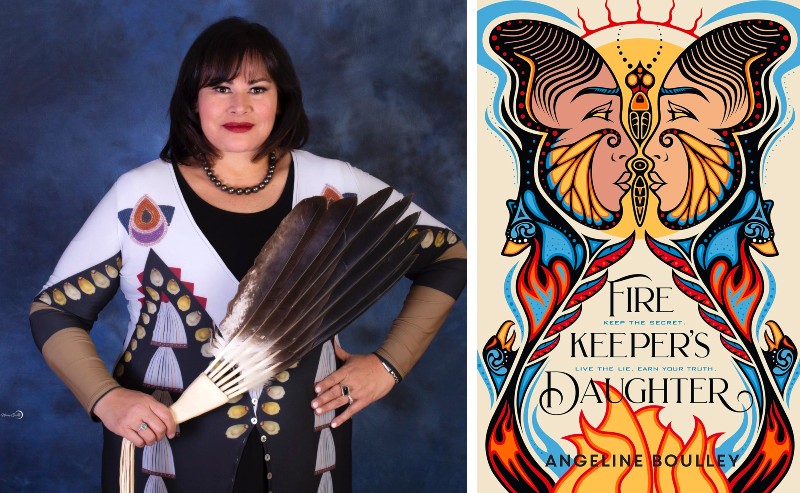 Q: The idea for Firekeeper’s Daughter goes back to high school for you. What did the process of writing your novel involve?
A: Surprisingly, it took over twenty years to “incubate” before I began to write the story. During that time I worked out the puzzle pieces to answer the initial question: Why would an undercover drug investigation need the help of an ordinary, 18-year-old Ojibwe girl?

Q: You are from Sugar Island in the Upper Peninsula. What was it like to write about a place that you call home?
A: Setting the story on Sugar Island felt like a love letter to my home. There is a feeling I get when on the ferry to the island—a connection to the land my father’s family comes from—that moves me so deeply. I love sharing a glimpse of the island with readers.

Q: The main character and narrator, Daunis Fontaine, must make hard choices when she becomes involved in the investigation on the very people who she loves. How did you go about creating this character?
A: I loved the idea of Daunis being so connected to everyone and everything in the community and, yet, still feeling like an outsider. It’s not just about protecting her loved ones; she wants to safeguard her community—a place that has not always embraced her.

Q: Your novel highlights the challenges faced by Native women, including violence. Simultaneously, the female characters are very strong and resilient. In your author’s note, you write, “It was paramount to share and celebrate what justice and healing looks like in a tribal community….” How does your novel contribute to the justice and healing?
A: I love hearing from Native women who speak about the pansy ceremony from the story, the healing power of women gathered to release their pain and stand together. One of the themes of the story is about justice—or rather, the lack of justice for victims of crime on Indian reservations. I hope readers are outraged about the reality experienced by Native women.

Q: The novel incorporates Anishinaabemowin throughout the text. Would you tell us about how you wove the language into the novel?
A: I chose to write the story in present tense, first-person point of view to reinforce that we (Indigenous people) are still here and are not relics of the past. So, the reader is inside Daunis’ head, seeing the world as she does. She is a young woman who was raised with the language being an important connection to her father’s family. It made sense for her thoughts to include Anishinaabemowin seamlessly. I was determined not to include a glossary—which I feel takes readers out of the story. My goal was for readers to glean meaning through context.

Q: Firekeeper’s Daughter covers a wide range of topics, from hockey to ethnobotany. As a librarian, I’m always curious about the research that goes into books. Did you do research for this novel?
A: I love research! I wanted to write a plausible story about unpleasant truths and joyful triumphs. So research was vital to my goal. I interviewed FBI agents and a former federal prosecutor. I took a deep dive into chemistry, the scientific process, human anatomy, and a variety of other topics. The most interesting aspect of my research was learning different methods of making crystal meth at the Michigan State Police Academy. I was the only non-law enforcement officer in the workshop.

Q: Firekeeper’s Daughter was published about a year ago. What has seeing your novel published and talking to readers been like?
A: Connecting with readers has been the best part of the experience, especially hearing how deeply the story resonated. I had high hopes for my book, and it has exceeded my dreams. I feel like I received the golden ticket of publishing, and I am so very grateful.

Q: Previously, you were the Director of the Office of Indian Education at the U.S. Department of Education. How did you transition from your career in education to being an author?
A: I view Firekeeper’s Daughter as an extension of my career in Indian education. There is power in storytelling to deepen understanding. Throughout my career I worked to improve public education for Native American students. Having Native teens see themselves in the pages of a story is paramount.

Q: What books are on your to-be-read pile?
A: On my TBR pile: Probably Ruby by Lisa Bird-Wilson, A Snake Falls to Earth by Darcie Little Badger, White Horse by Erika T. Wurth, and anything Terese Marie Mailhot writes.

Q: Film rights for Firekeeper’s Daughter have been optioned to Higher Ground Productions for Netflix. Along with that, what is next for you?
A: I am working on my next book (coming spring of 2023) which is not a traditional sequel. It is set in my tribal community and features a different main character. I am an executive producer and script consultant on the Netflix series of Firekeeper’s Daughter. And there are (currently) 20 foreign editions of my book being published across the world. This is such an exciting time for me. And to think it all started with a spark of an idea when I was a senior in high school!

Ann Arbor District Library hosts Boulley for a free author event at 7 pm on Wednesday, April 6, at the Downtown Library.

Will this be recorded,…

Will this be recorded, please? I would love to attend this, but am immuno-compromised and am not allowed to by my doctors.

Hi there, yes, a recording…

Hi there, yes, a recording of the event will be temporarily available to watch on demand for two weeks afterwards. Don't miss it, it will be on this page: https://aadl.org/node/583239 Thanks for your interest!