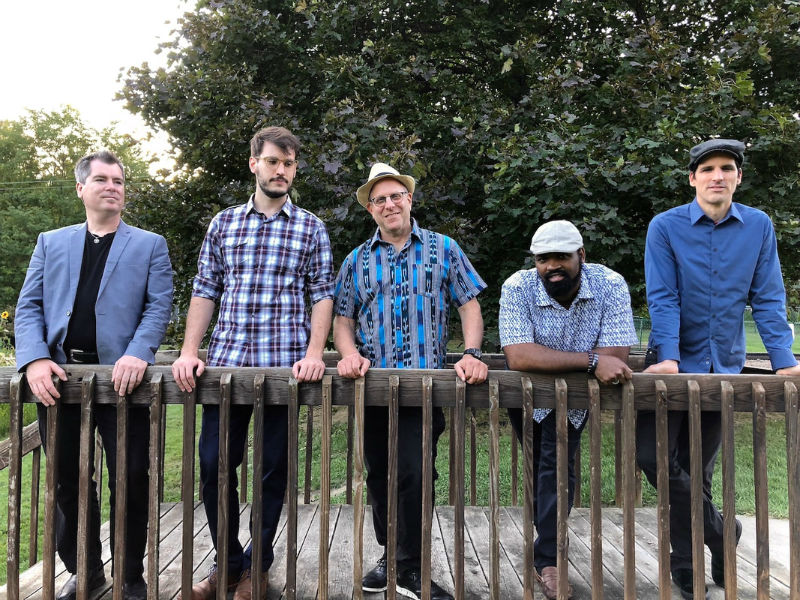 The Rob Crozier Jazz Ensemble’s new recording, Ocean Blue, explores the theme of nature in general -- and water in particular -- in a variety of settings and styles. The nine original songs benefit from the support of a rock-solid band: primarily bassist Crozier on bass, Rafael Statin on horns, Keaton Royer on keyboards, Rob Avsharian on drums, and Aron Kaufman on percussion.

The follow-up to last year’s Tall Trees, the new album features Crozier’s compositions and the band’s skilled playing, which make for a powerful combination. The slightly mysterious quality of “Autumn Moon” does indeed evoke its namesake and would make a good soundtrack for Halloween. “Ocean Blue” is built around a sweet and somehow sad flute line courtesy of guest artist Kelly McDermott, Crozier’s wife. “Water Snakes” gives Crozier the chance to show his chops on, of all things, a didgeridoo.

While most of Ocean Blue is instrumental, the opening and closing tracks do feature vocals. On “Water,” Terry Jackson recites a poem that inspired the music. “Into the Gloaming” features a funky beat, atmospheric charming vocals from Emma McDermott, and a compelling bass solo.

On two occasions, the album departs from its nature theme. “Keaton’s Blues” sounds like it belongs in a smoky New York piano bar in the 1940s, highlighted by Royer’s swinging and shuffling piano. Meanwhile, “R Is For Richko,” with its sharp drumming and inventive sax solo, might have fit comfortably in that same bar a couple decades later.

Crozier took the time to answer a few questions about the new album in advance of a show on Friday, Nov. 16, at Kerrytown Concert House.

Q: How did this recording come about? Did you originally set out to make an album of nature-themed songs, or did that concept develop over time?
A: I wrote a song for my wife’s group, Nessa, called “A Walk in the Wood” earlier this year, which the group performed at The Ark. After writing most of the parts to the song on an orange ukulele on the beach in Florida, I realized that I should give it a more apt title like “Ocean Blue.”

I had already debuted some of my newer material with my own jazz group at Kerrytown in 2017.  Some of these tunes also took on a nature-based name like “Autumn Moon” and “Equal Night,” which is the translation of equinox. Then, as I got the idea to do a record called Ocean Blue, I decided to play around with some of the titles to songs in order to fit the nature theme. “Water” used to be called “Tino’s Blues” -- named after my dog -- and “H.O.M.E.S.” used to be called “Smooth.”

Q: When you released your first album, you mentioned that most of the music was written in a fairly short period of time. Did you work the same way this time around? Were any songs particularly challenging to write?
A: Ocean Blue as an album took more time to write and was born of a trial-and-error process in which I would demo songs at my weekly Weber’s gig on Sunday nights to see how I liked them. I hadn’t used this “workshop” method before. I have to say that, generally, the songs themselves were fairly straightforward to write. “Ocean Blue” and “Into the Gloaming” took the longest to put together -- one or two weeks each.

Q: A couple of the songs were written for friends/colleagues. Did anything in particular inspire you to compose these? How do you approach that type of writing, capturing a personality in music?
A: “Keaton’s Blues” was originally called “Throw Away Blues” and my pianist Keaton Royer was the first to play it, so I named it after him. I really enjoyed his interpretation and strong sense of swing. “R Is for Richko” is a living tribute to my friend, guitarist Rodney Richko. I’ve really learned a lot from Rodney and have greatly benefited from playing with him for about four years now. “Into the Gloaming” was also written for Rodney to perform as a solo guitar feature at the Elkhart Jazz Festival earlier this year. I gave the piece a nice, “laid back” feel characteristic of some of Rodney’s solo guitar work that I’ve enjoyed, though our rendition on this album is more of a crossover, jazz-meets-Motown feel.

Q: Most of the album is instrumental, but the two exceptions are notable. How did you become aware of the poem that led to “Water”? And what can you tell listeners about Emma McDermott, who provides both lyrics and vocals on “Into the Gloaming”?
A: My godson Terry Jackson performed his poetry at one of my summer concerts, which led me to have him on the recording. I directed him to write in support of the theme of the album, which he did beautifully. Emma McDermott is my stepdaughter, who is a sophomore at Columbia College in Chicago as a music student/songwriter. She has done such a great job with her own music that I wanted to offer her an opportunity to write and perform on “Into the Gloaming.” I had always heard a lyric for the song but hadn’t been inspired enough to write one myself.

Q: Where do you see your music going next? Are you already thinking about your next recording?
A: Yes, the creative process is never-ending. I am strongly thinking about both, a vocal album -- I sing, too -- and another original jazz release that reaches more into world music and the use of electronics.

Q: How would you rate the health of the local Ann Arbor music scene in general, and of jazz in particular? Any thoughts on how we as a community can help connect music and audience in 2018 and beyond?
A: The Ann Arbor music scene could use some more venues that actually pay musicians -- not in beer or tokens. The jazz scene is decent and really exists because of promoters and venues with a mission to make jazz available to the public: Dave Sharp at Old Town Tavern/Blue Llama, Paul Keller and all the Zal Gaz Grotto folks, and my band at Weber’s on Sunday nights.

The Rob Crozier Jazz Ensemble plays at 8 pm on Friday, Nov. 16 at Kerrytown Concert House, 415 N. Fourth Ave., Ann Arbor. Tickets at $10 and $20 are available at a2tix.com. For information on more shows and other events, visit robcroziermusic.com, event-jazz.com, and nessamusic.com.