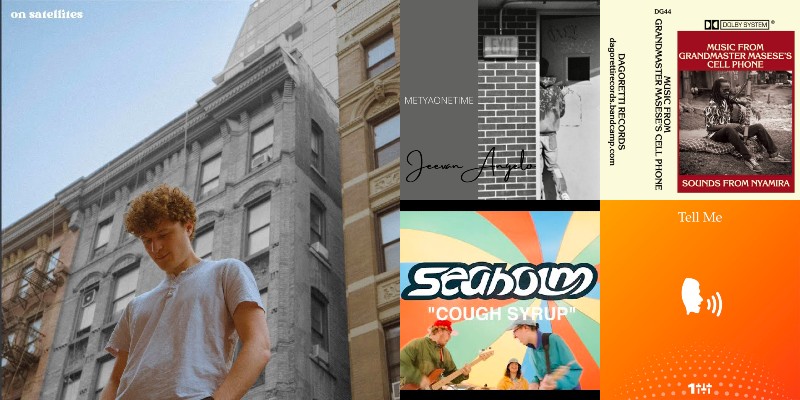 This week features a pop mini-album by Halfright (ex-Kelseys), Kenyan folk music and stories by Grandmaster Masese, hip-hop by Jeevan Angelo and Jevon Alexander, and a pop-punk video by Seaholm.

Halfright, On Satellites
The Kelseys were a quartet, then a trio, of University of Michigan students who released numerous singles and EPs over their four or five years together, including the excellent jam "Pollyanna," which is one of the finest pop songs (and videos) to ever come out of Ann Arbor—and a personal all-time fave no matter the tune's geographic origin. With graduations come moves and The Kelseys appear to be no more (for now?) as lead singer and primary songwriter Peter Kwitney has returned to New York City, the place where he grew up, and released a solo mini-album under the artist name Halfright. On Satellites is a fine collection of tunes, and Kwitney channels his inner Chris Martin throughout, mixing ballads and uptempo pop. The mini-album sounds like it was recorded at home, which is cool—many of The Kelsey's finest tunes were documented in their Ann Arbor bedroom studio—but I'd be curious to hear what these songs sound like with a full band and studio treatment. In fact, I know just the band who I'd love to hear play these tunes ....

Grandmaster Masese, Grandmaster Masese and Music From Grandmaster Masese's Cell Phone
Ann Arbor's Dr. Pete Larson went to Kenya to work on epidemiology but while he was there he also started playing the nyatiti, a plucked-lute instrument associated with the Luo people in the western part of the country. One of the many musicians he met in Kenya was Grandmaster Masese, one of a few people still playing the obokano, an eight-stringed lyre that would give even the most bass-friendly Jamaican sound systems a run for their money. Larson's label Dagoretti Records released Masese's self-titled debut album last December on CD and digitally, but the vinyl run was delayed until recently. Tragically, Masese died suddenly in early June and now, just a month after his passing, Dagoretti has announced a new collection of recordings captured by Masese as well as a book he was writing about his instrument's history. Music From Grandmaster Masese's Cell Phone is a tape that features 19 tracks of obokano songs that were delivered by chance: Masese sent Larson a .zip file of all the audio on his phone, most of which were interviews with the musicians he spoke to for his new book, The Music Will Not Die: A Journey Through the Obokano Music of Western Kenya. But included among the chats were the anonymous tracks heard on Music From Grandmaster Masese's Cell Phone, which acts like an accidental Smithsonian Folkways album in the way it documents obokano performers in unfussy field recordings. A true gift of documentation for this increasingly rare form of Kenyan folk music. Maese's book is a limited edition of 100 copies, and you can get a copy of it along with the digital edition of the cell phone tape here.

Jeevan Angelo, "Metyaonetime"
A few weeks ago, I mentioned Jeevan Angelo's new EP and an accompanying MLive article on the 16-year-old Ann Arbor-ite and rapper/producer. And as happens when you've got the skills to knock out tunes at home, Angelo already has a new single: "Metyaonetime" is a two-minute-long slow shuffle with the sort of monotone rhyming that's all the rage among the young folk.

Seaholm, "Cough Syrup"
The first video from this Ann Arbor trio's new album, It's Raining Outside, is a recording of a song that came out in 2018 on the I Thought It'd Be Funny EP. If you're even remotely a fan of pop-pun, "Cough Syrup" will have you bopping around and reaching for the Fat Wreck Chords catalog.

Jevon Alexander, "Tell Me"
I'm pretty sure Ypsi hip-hop artist Jevon Alexander has left the Great Lakes State to be a Florida man, but he's still well-connected throughout the 734 music community. His latest single was produced by Michigan-based beatmaker DDS and the tune showcases Alexander's mellow Drake-like mix of singing and rapping.