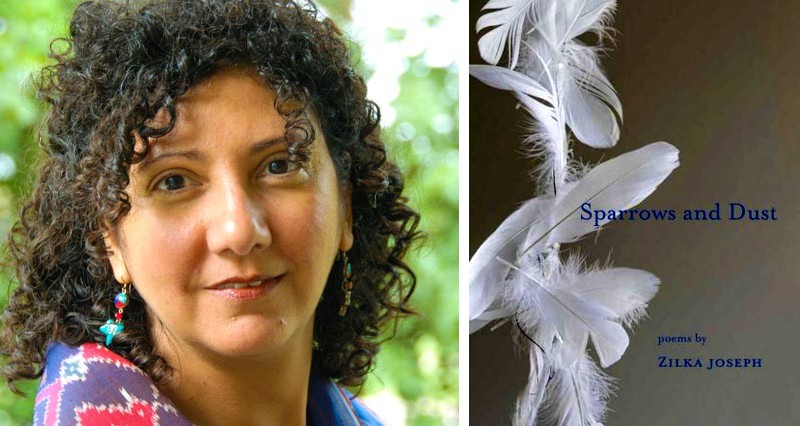 What would it be like to be a bird?

Birds become a constant in the poet’s life, from India to Michigan. Like the migrations of birds from place to place, the last poem begins with a description of the vastness of our collective lives and the places where we spend them:

and in worlds within worlds,
we live.

Throughout Joseph’s poems, all creatures are trying to make their way in the different places that form the settings for their lives. There are the geese and the poet observing them, and they are all distressed after five eggs disappear one spring. Yet being able to watch that drama play out is the result of a happy milestone of moving into a new condo for the poet.

Arrivals and departures, and worlds appearing or disappearing, happen through flying. A hummingbird visits in another poem, “So Much,” to get “one more hit of her liquid / sugar high ill- / usion on which / her flight / depends.” Slowly we piece together what flight might be like, what sustains it, and what possibilities it offers.

Joseph’s poems sometimes alight on the birds themselves and other times show birds as metaphors, such as in the poem “Mama, Who’d Have Thought,” which speaks to the poet’s mother on how birds of prey are not a threat to safety but how police shootings and detaining children at the border are. In fact, many of the poems offer reflections on the poet’s parents.

These poems hold many moments for the admiration of nature. “Fall Now” describes that “we count kestrels overhead / one monarch sits in my palm.” Joseph asks us to notice and appreciate.

Joseph is a creative writing teacher, editor, and manuscript coach in Ann Arbor. I interviewed her about Sparrows and Dust, her teaching, and what she’s working on next.

Q: In the poem, “For the Birds,” in your new chapbook, Sparrows and Dust, it says, “I’m for the birds. I’m never alone.” From the way you write about them, it appears that birds are a constant in your life and the places where you’ve lived. What draws you to birds and writing about them?
A: Ever since I remember, animals and birds have been part of my life in many ways, so my interest in wildlife and birds is really quite organic. My father particularly knew a great deal about nature, birds, and fish. He was in the Merchant Marines and sailed almost all over the world. He brought a baby African grey parrot from Zanzibar home to Mumbai years before I was born—so he was four years older than me! And a canary, too. We always had a cat or dog, and we were always rescuing some creature or other. My parents bought me a lot of books and encyclopedias, so my desire to learn just kept growing. Writing about birds (and animals) comes very naturally to me, I don’t think about it. Wherever I go, I am always identifying and watching birds and wildlife. My husband and I make it a point to visit national parks. This is what gives us the greatest joy. I am more comfortable with animals and birds than I am with humans!

Q: What brought you to Ann Arbor?
A: In 2007, I was enrolled in the Helen Zell Writers’ Program for an MFA at the University of Michigan. So I moved from Auburn Hills, Michigan, to a tiny efficiency on Thompson in Ann Arbor for two years. After I graduated, my husband and I decided to move here permanently. I’ve been here for 14 years now.

Q: Tell us about your work teaching creative writing and editing. What do you tell the authors who you work with?
A: After I graduated, I worked as a project manager for the Center for South Asian Studies at U-M for three years, and it was very stressful. During that time, I would also teach evening workshops for Springfed Arts, a nonprofit organization where I had worked for several years. I knew I would eventually go back to some form of teaching or coaching. I started my own workshops, began critiquing manuscripts of writers (poetry, fiction, nonfiction/memoir) in the community and, later, nationally. I don’t just critique someone’s work, I coach them, so they leave with more knowledge about craft than they came with and are able to apply what they learned to their next set of poems or stories or collection of work. There is so much to tell my authors depending on their needs, but I think the most important thing I tell my students and clients is to be true to themselves, to know who they are, understand their process, and then work towards where they want to go/what they want to achieve, or not.

Q: Back to your book Sparrows and Dust, parents are mentioned in several poems. How do these poems connect with your own parents and experiences?
A: These poems are mainly about my parents, loss and grief, displacement both geographical and emotional, a search for home, but they are also about my connection with them after they have passed. I create a world where the past comes alive (while bringing in the present), and where they visit as they please, just like birds that visit and fly away, return and fly away again. I also use a version of the Sufi philosophy of life being a journey toward truth as a theme in this chapbook, and a bird can only rest in a tree for a while, and then it has to move on. So there are several layers of meaning to peel back as you read.

Q: The poem “Once Upon a Snow Bunting” conveys the preciousness of a bird sighting, especially in the lines “The pale angel flew away. Left tiny / wing prints near our feet.” Do you hope that readers will in turn pause and observe such scenes?
A: Certainly. If some of these poems and images create some interest in the world of birds and nature, it would make me very happy. Sometimes when I point out a bird to someone who has no interest in birds at all and name it, and they come back later and say, “Guess what, I saw a cardinal the other day,” I am thrilled. Or sometimes someone begins to observe a robin’s nest (with hatchlings) in a hedge outside their house, and it will be as if they are noticing it for the first time, while it’s possible that robins might have been nesting there in previous years, too.

Q: The poem “Mama, Who’d Have Thought” considers how threats to safety in this country are not from the birds of prey but rather from police shootings and detaining children at the border. The violence feels at odds with the success of moving into one’s own home, which is mentioned earlier in the poem. The poem concludes with the idea that “bad things” could happen anywhere. How did this poem come about?
A: Yes, there are all these things layered in the poem, and I set it up like a formal dramatic monologue so there is physical and narrative movement as well. No matter how wonderful your life is, or how much success you have, as human beings we are always vulnerable to danger, especially if you are a person of color and if you are disadvantaged, or seeking asylum, etc. And if your eyes are open, you are conscious (and knowledgeable) of what’s going on in the world around you and abroad, those issues quite naturally reflect in your writing. At least, for me it does. In this poem, my goal was in a short span of time to compress past and present, juxtapose emotions and facts, create texture and memorable images, and hope that the reader will connect to it all, maybe discover a new way of seeing, and perhaps be moved as well.

Q: There is also a gentleness infused in these poems, such as the two poems about bugs so small that it is hard not to accidentally crush them. What did you learn from writing those poems?
A: It’s always a source of wonder to me where poems come from. Being someone who is very sensitive and compassionate, everything seems to speak to me. From a very young age, it was hard for me to see cruelty of any kind. I have witnessed a lot of harshness and brutality in my life, toward anyone, women and animals, in particular. I am still haunted by that. It pains me when some creature has to be killed, exterminated. So my first instinct is to remove it safely. These creatures teach me something every day and writing about them, and my thoughts and feelings, teaches me about myself. My own struggles and hypocrisy. For me, it is a process of growth and consciousness. In my book Sharp Blue Search of Flame, I have a line in the last poem called “Listen.” It goes like this: “shelter with your hands//the spider that crawls/ across the palm of your page, free her in the grass.” But after that there is a warning to those who do harm: “atone/ O stone-hearted one, listen/beware/the unsleeping/ eyes of inconsolable goddesses.”

Q: What’s on your nightstand to read?
A: Too many books to mention! Old and new. But I never seem to catch up! Here are a few. frank: sonnets by Diane Seuss (I’m a huge fan!), Some Are Always Hungry by Jihyun Yun, There's a Revolution Outside, My Love: Letters from a Crisis edited by Tracy K. Smith and John Freeman, Glyph: Graphic Poetry = Trans. Sensory by Naoko Fujimoto, and Arrow by Sumita Chakraborty. I would like to share that I just read Jericho Brown’s stunning collection The Tradition and highly recommend it. I am re-reading Ross Gay’s book Catalog of Unabashed Gratitude (I do that every now and then) because it gives me such joy and hope. Also, I just started reading Paisley Rekdal’s brilliant and necessary book about cultural appropriation called Appropriate: A Provocation—anybody writing today and every aspiring writer should read this book. I highly recommend these books!

Q: What are you working on next?
A: I am delighted to say that I have a full-length collection of poems called In Our Beautiful Bones coming out in September from Mayapple Press. The editor and I putting the finishing touches on the manuscript as we speak! I will be doing some readings in fall.