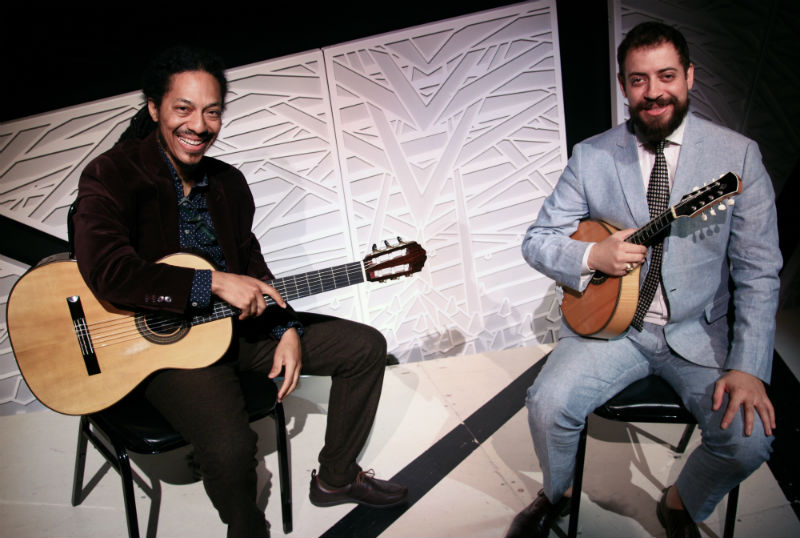 For his April 29 show this year at Kerrytown, Brito is down to the essentials, pairing with guitarist João Luiz, one half of the Brasil Guitar Duo and an equal to the mandolinist in terms of choro adoration and acumen. The setlist will draw from compositions by Jacob do Bandolim, Orlando Silveira, Edurado Souto, and Pixinguinha as well as Brito and Luiz.

So, what is choro? 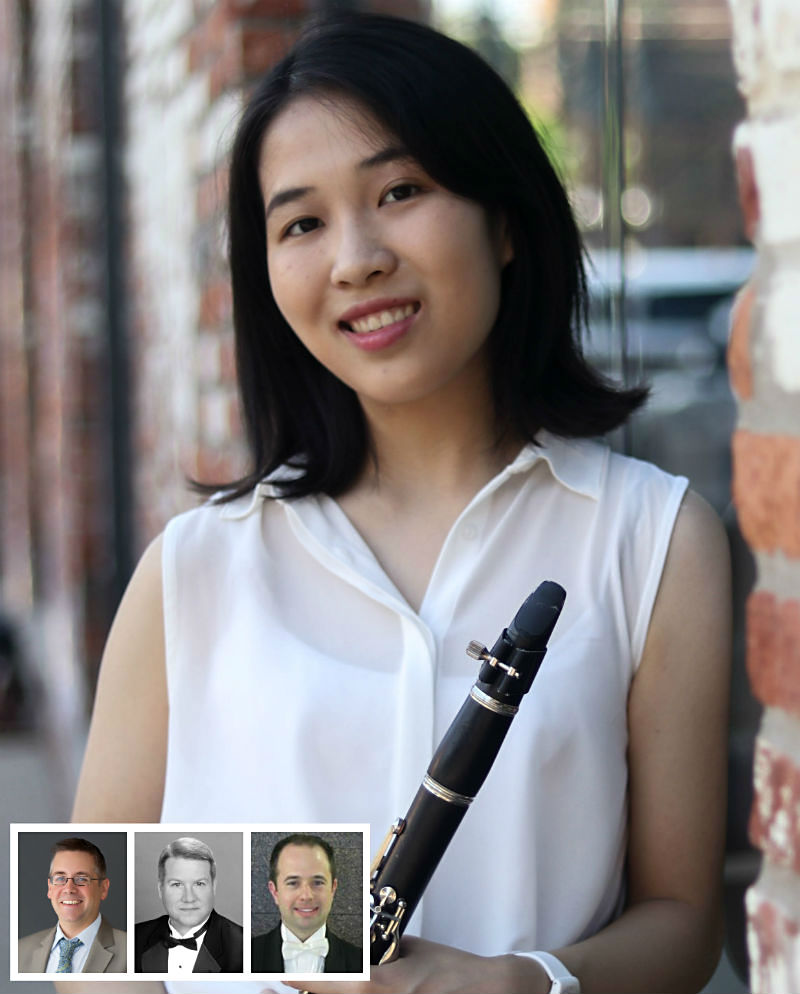 For the past 39 years, the Ann Arbor Concert Band has prepared for a season finale. That's a lot of successful seasons for a community band consisting of non-professional musicians. Their love for performing will be obvious at the group's latest season finale, "Symphonic Broadway," which will feature music from Mozart, Wicked, Chicago, Phantom of the Opera, A Chorus Line, and a selection of works by Jerome Robbins.

I talked to Phillip Rhodes, president of the Ann Arbor Concert Band, about the group's history, scholarship, and season-ending concert, which happens May 6 at the Michigan Theater. 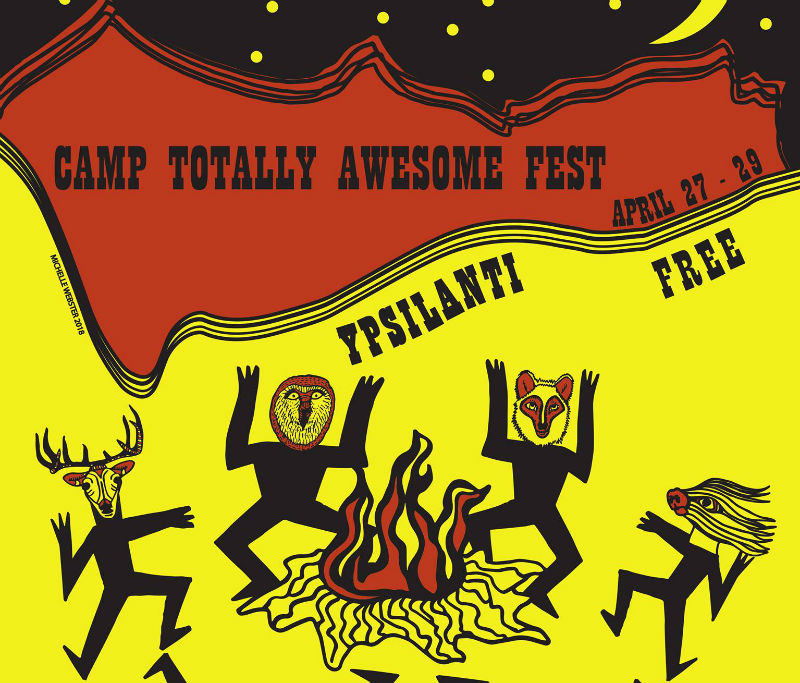 Dogs, tarantulas, and human children are encouraged to come to the 14th Camp Totally Awesome Fest.

In fact, everybody is welcome at this annual Ypsilanti event, but last year Awesome Fest’s guiding force, Patrick Elkins, specifically said dogs, tarantulas, and human children should come hear some jams, and I’m just going to assume the offer stands for this year’s throwdown since the Facebook event post says, “Free! All Ages! All Species!”

Spread over April 27-29 at six venues, Camp Totally Awesome Fest is primarily about music -- there are about 45 bands and a few DJs and performance artists on the lineup -- and the genres span R&B and indie rock to hip-hop and modular-synth electronics. 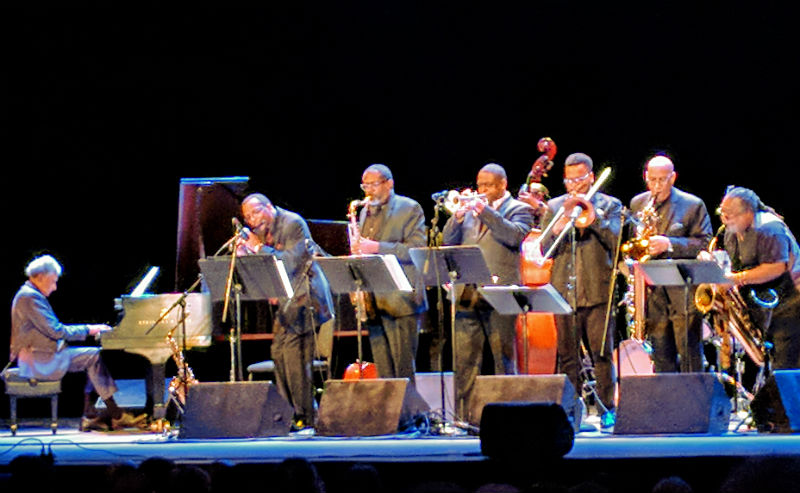 Abdullah Ibrahim's concert at the Michigan Theater on April 13 began like all his shows: the pianist alone on stage with his instrument, playing a meditative piece filled with sustained chords, floating harmonies, and a sound that slipped naturally from Bach to blues. Then Cleave Guyton (flute) and Noah Jackson (cello) joined Ibrahim for the chamber-jazz piece "Dream Time" from 2014's Mukashi.

It was in these solo and trio moments that listeners could best appreciate the 83-year-old Ibrahim's piano playing -- because otherwise, he didn't play much at all.

In Extremis: Colin Stetson’s interpretation of Górecki’s Symphony No. 3 pushes it to the edge 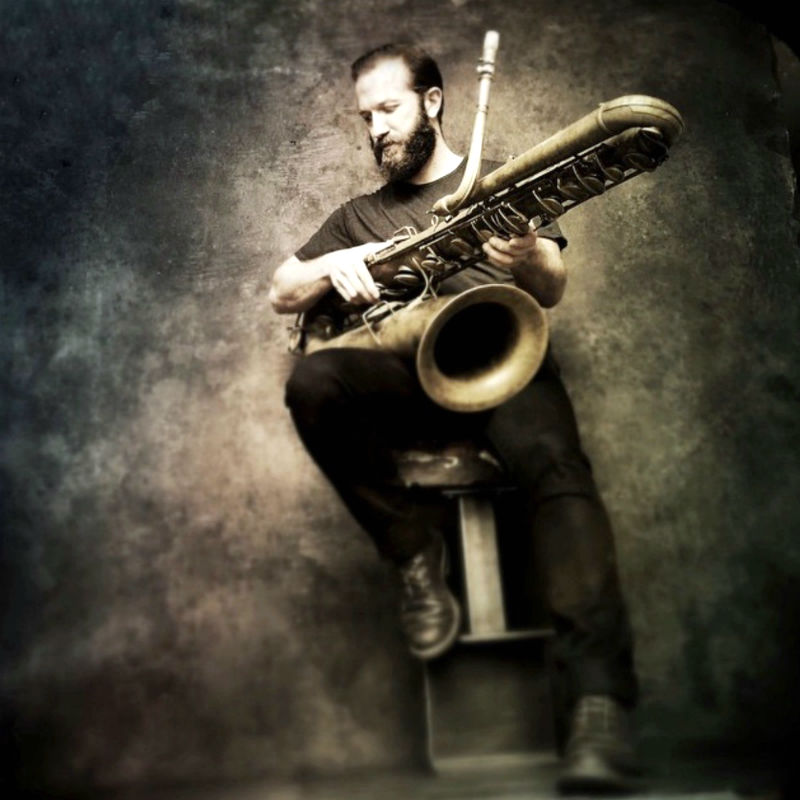 Henryk Górecki’s Symphony No. 3, Op. 36 is nearly an hour-long dive into anguish.

But rather than sounding angry, aggressive, or atonal, the three movements that comprise Górecki’s “Symphony of Sorrowful Songs” are stunningly beautiful.

Symphony No. 3 is filled with dolor, but the modal framework, simple harmonies, and gentile repetition give the music a familiar and comforting feeling despite being inspired by stories and songs of mothers and children being separated by war.

On the album Sorrow -- A Reimagining of Górecki's Third Symphony, Ann Arbor native Colin Stetson tweaks the mega-popular work in a way that stays true to the composition’s raw emotional state while also diving deeper into its deep well of gorgeous despair. (You can hear Stetson and 11 other musicians in the Sorrow band, including Ann Arbor’s Justin Walter (EVI, synths), Dan Bennett (sax), and Andrew Bishop (sax), perform the piece at the Michigan Theater on Saturday, April 14.)

Pat Thomas reconstructs the revolutionary history of Jerry Rubin in "Did It!" 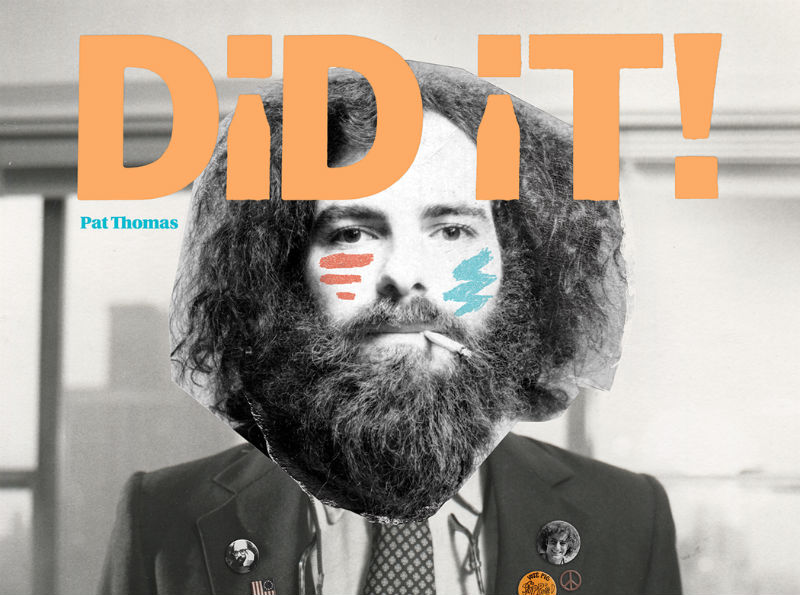 As an archivist, Pat Thomas is focused on letting the subject speak or sing unadulterated. So, whether it's working on album reissues for the Light in the Attic label and others, or writing about the Black Panthers and other political movements, Thomas wants voices and ideas to be presented as the artists and activists intended.

Thomas' latest search for the truth is Did It! From Yippie To Yuppie: Jerry Rubin, An American Revolutionary, which follows his other graphics-heavy book for Fantagraphics, Listen, Whitey!: The Sounds of Black Power 1965-1975. 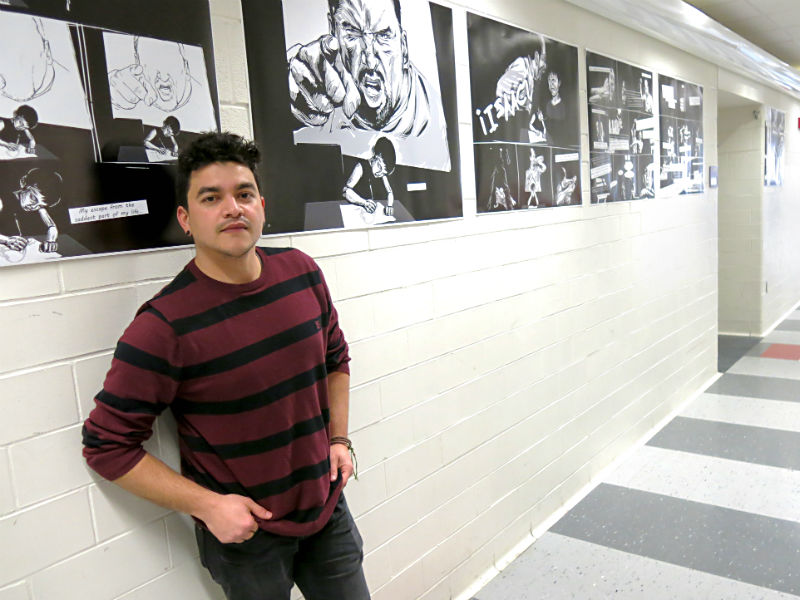 Comic-based journalism, where an artist tells reported stories with his or her drawings, has the benefit of addressing sensitive issues with a bit of emotional distance that doesn't always exist in the more immediate video- and audio-based storytelling. It can also give reluctant participants the freedom to tell their difficult and dangerous tales without a direct visual representation, which could put their lives at risk.

Joe Sacco is a pioneer of graphic journalism as shown in his many books, including Palestine (2001), Safe Area Gorazde (2002), and Journalism (2013). In Sacco's wake a mini-movement of graphic journalism has emerged, such as Sarah Glidden’s How to Understand Israel in 60 Days or Less (2016), Wendy MacNaughton's Meanwhile in San Francisco: The City in Its Own Words (2014), and Germán Andino's El Hábito de la Mordaza / The Habit of Silence (2016). 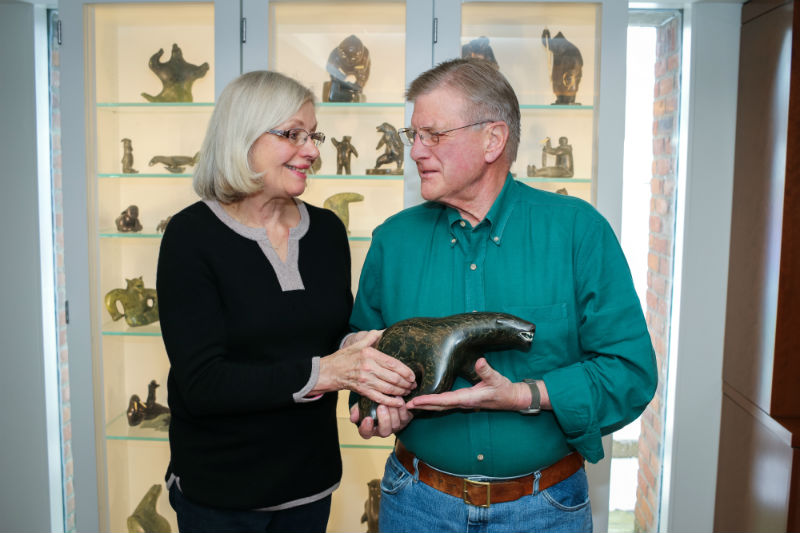 Hail to the University of Michigan Museum of Art -- its Victor campaign just found a new leader in donations and it's the best.

Philip and Kathy Power donated $4.5 million worth of Inuit art, making UMMA one of the most important museums for creative works from the indigenous peoples of Alaska, Canada, and Greenland.

The Unknown Guitarist: Throwaway's Kirsten Carey is in the bag for avant sounds 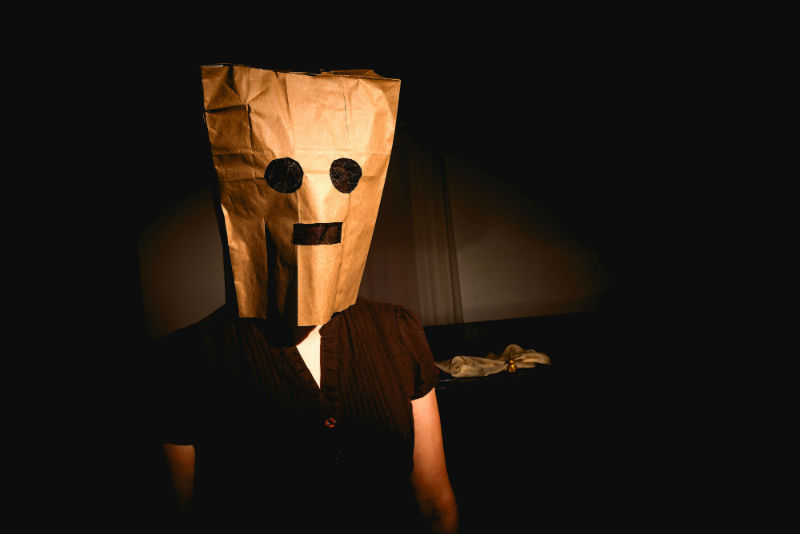 She also wears a paper bag on her head like The Gong Show's Unknown Comic.

That combination of avant-garde string slaying and performative humor defines Carey's art-punk duo Throwaway, which just released the songs "Bonathan Jyers" and "Exotic Bird" as a digital single and booked several shows in Southeast Michigan, including March 16 at Ziggy's in Ypsilanti. 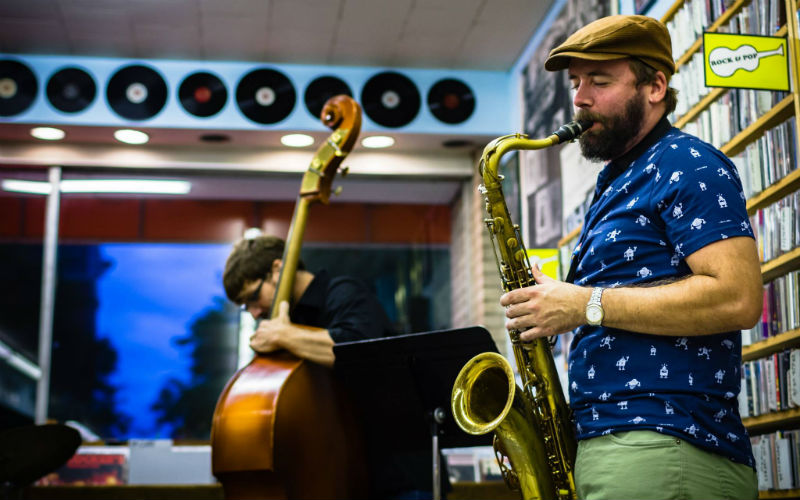 When the Tim Haldeman Quartet assembles at Hathaway’s Hideaway in Ann Arbor on Sunday, March 11, to play improvised jazz while films are screened, the musicians will continue a tradition that is most associated with a pioneering soundtrack by trumpeter Miles Davis.

At the end of November 1957, Davis flew to France to begin a monthlong series of concerts, including a three-week stint at Club Saint-Germain in Paris.

But the trumpeter didn't bring the musicians who comprised his first great quintet.