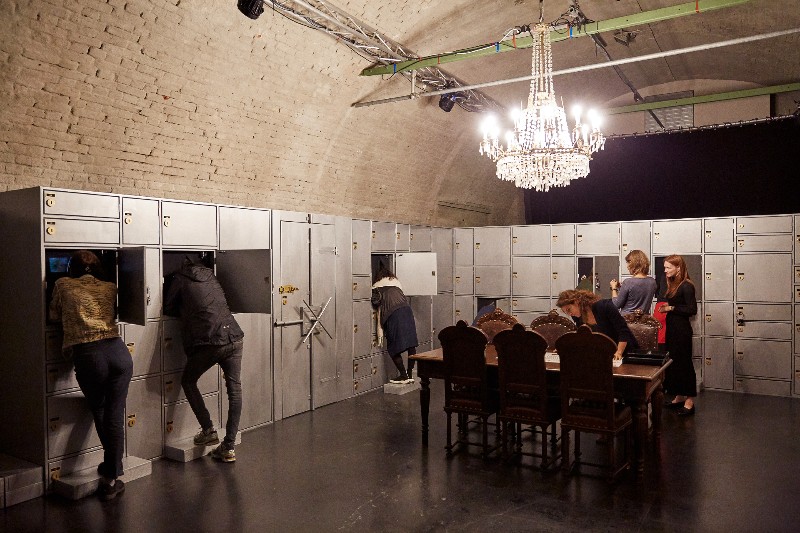 If you could unearth all the secrets of your family’s past, would you?

Lebanese artist Tania El Khoury set out to do that with her interactive art installation Cultural Exchange Rate, which is presented at the Stamps Gallery, courtesy of UMS, until January 29. The multimedia work tells the artist's mission to trace her family’s roots by having gallery-goers open locked boxes and stick their heads inside to see videos, sounds, objects, and images of El Khoury's family journies between continents.

Originally from Akkar, a small village in Lebanon located near the river that separates Lebanon and Syria, El Khoury’s great-grandparents migrated to Mexico during a civil war. Her grandfather was born in Mexico, but her family eventually moved back to Lebanon, where he collected old coins and Lebanese liras, hoping they would be worth more than their original value one day when the currency exchange rate changed.

The story progresses to the present, with the artist becoming pregnant. In hopes of giving her unborn daughter citizenship in a country with a better passport and more cultural freedom, El Khoury searches for her grandfather’s birth certificate in Mexico, so her daughter can gain Mexican citizenship. The journey is frustrating, and while she hits a lot of dead ends, she also discovers family members in Mexico City that she didn’t know she had. Her story is one of blended cultures, resilience, survival, and hope. 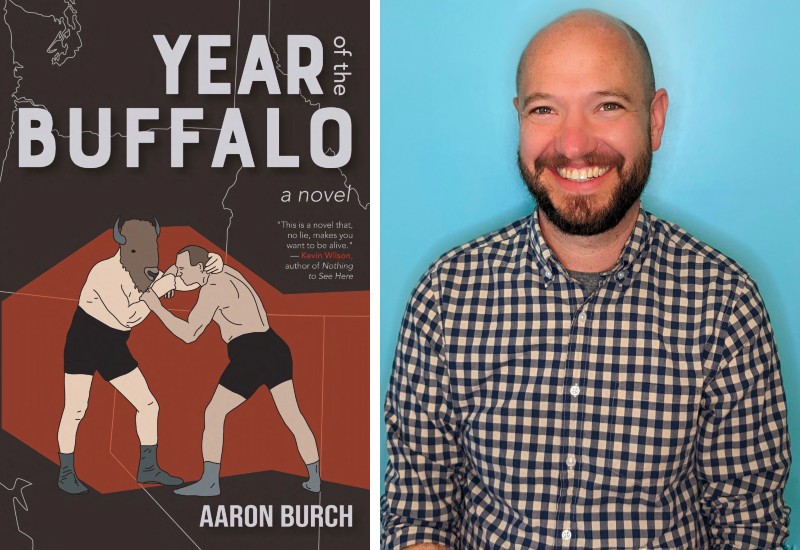 Aaron Burch captures the spirit of a road trip in his novel, Year of the Buffalo. The long drive sets the stage for bonding, observations, and memories shared between brothers Ernie and Scott as they travel from Washington state toward Detroit.

In this third-person novel, the focus shifts from character to character. On the road, Ernie reflects:

They were doing it. He’d agreed to the trip not because of any desire to return to Michigan but just because. Because he had no reason not to, because it seemed like Scott wanted him to go, because why not? But wasn’t this what roadtrips were supposed to be? Revelatory and epiphanic and life-changing and life-answering and everything else about life that he was searching for, everything he thought the farm might be able to be and now believing a cross country roadtrip was definitely going to be. There was a simplicity to the moment—two guys driving, taking their time, without consequence.

Travel by car—or SUV for Ernie and Scott—may be all those things, but the journey also emphasizes the tension and strong need for reconciliation between the two siblings.

The road trip takes on a life if its own as the two men discover secrets about each other. Scott, once a professional wrestler, grapples with the distinction between his persona and self, as does Ernie. The wrestling persona of Mr. Bison must come to life again since the brothers are on their way to promote Scott’s new video game. One of their many interactions reveals the pressure that comes from its reappearance: 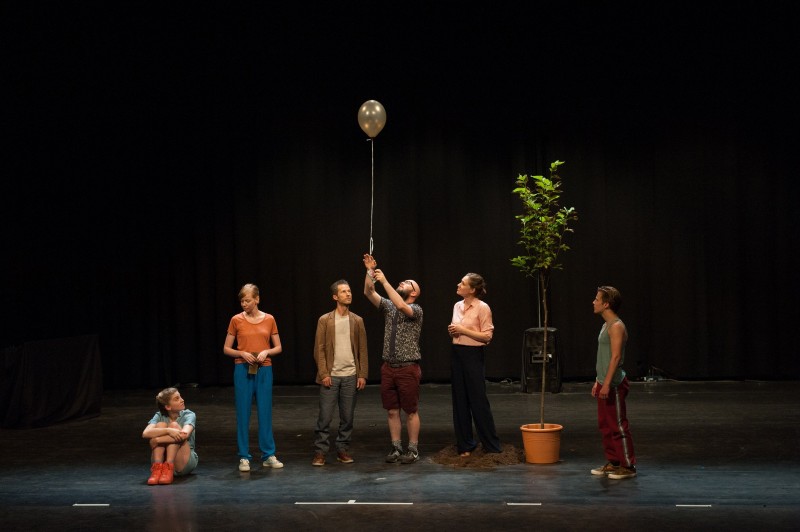 UMS' Are we not drawn onward to new erA examines the possibility of undoing the damage people have done to earth in one night. Photo taken from UMS's Facebook page.

A few people quietly left the UMS presentation of Are we not drawn onward to new erA mid-performance while many others stayed and took part in a spirited standing ovation.

Conceived and performed by Belgian theater collective Ontroerend Goed, it’s just one of those shows: an experimental, challenging piece of theatrical performance art that you either embrace or reject.

And your reaction likely depended on your capacity for patience and ambiguity, which was initially tested when deciding whether or not to purchase a ticket for the January 20 or January 21 performance.

By way of a vague show description, the UMS site reads, “You can’t put toothpaste back in the tube. You can’t remake a shattered vase. Or undo the damage that humans have inflicted on the Earth. But what if you could—in just one night?” (When asking my husband if he wanted to accompany me to the show, he asked, “What is it about?” “Uh … repair, I guess?” He didn’t come.)

Author and Former Literati Bookseller Mairead Small Staid Narrates Travels in Italy and the Search for Happiness in Her Book of Essays, “The Traces” 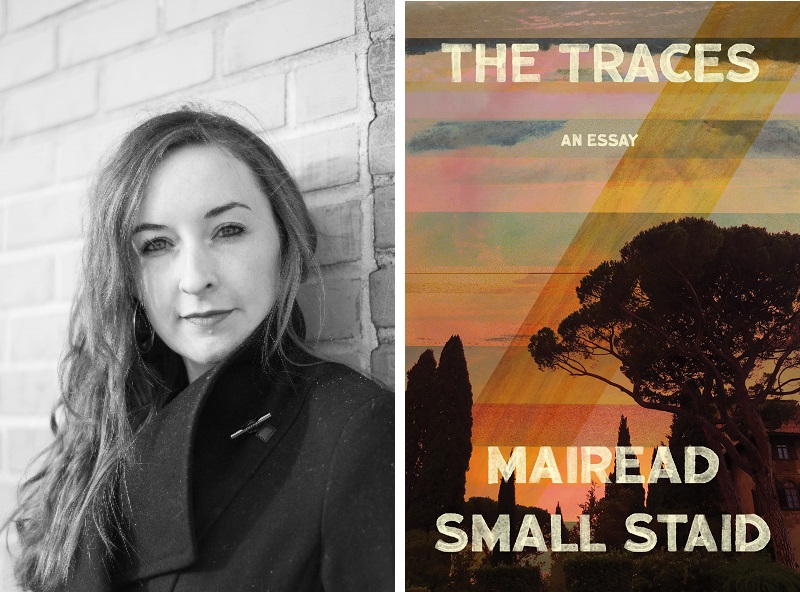 Happiness may be elusive, but the quest is part of the experience.

“Happiness is the endpoint and the race itself, the finished vessel and its firing,” writes Mairead Small Staid, an author, librarian, a University of Michigan alum, and former Literati bookseller.

Her new nonfiction book, The Traces: An Essay, recounts the author’s time in Italy, studies the concept and feeling of happiness, and critiques art and literature. Staid’s chapters form individual essays that roam through concepts such as whether a person is different when in different places and look at sculptures and paintings by artists such as Michelangelo and Leonardo da Vinci. Italo Calvino’s novel, Invisible Cities, is a focal point to which the book repeatedly circles back.

The exploration itself brings novelty and thus pleasure. Staid writes that, “Here lies another possible explanation for my happiness, this sustained and sustaining newness: it’s November, after all, and still each ordinary day—each breakfast, each cigarette—is tinged with cinematic light.” The fresh sights and circumstances can reinvigorate one’s outlook. 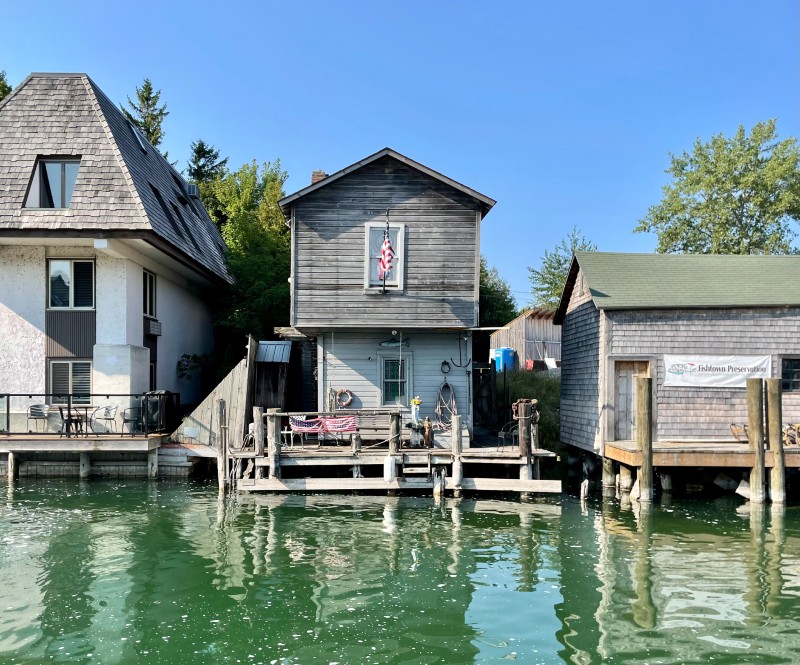 Architecture aficionados who don’t want to leave their houses can now take a virtual road trip to Northern Michigan with photographer Josh Lipnik.

In “Up North,” Lipnik travels through small Northern Michigan towns to find the marvelous facades, neon signs, elaborate Victorians, and architectural trends that time has left behind.

He offers his evocative pictures to tell the story of immigrants, industry, and the role of local resources and geology while reflecting on his time on the road.

Lipnik runs Midwest Modern, a platform for photography, research, and writing about architecture and design. He is also a graduate of the University of Michigan’s Taubman College of Architecture and Urban Planning and The Ohio State University’s College of Engineering. 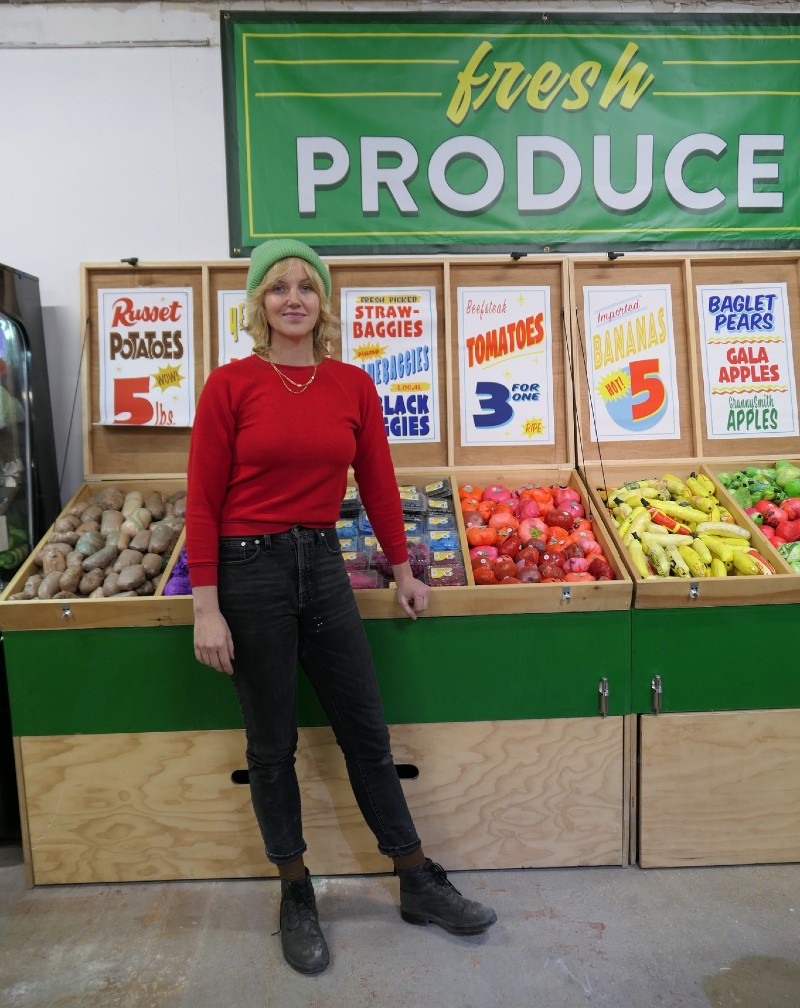 It’s an unnervingly perfect coincidence that when you emerge from the installation/play The Plastic Bag Store (TPBS) presented by University Musical Society (as part of its No Safety Net series), you see a cafeteria space with boxes of individually packaged snacks for sale on a rack.

Why? Because if there’s one thing TPBS achieves, it’s a newly heightened, re-calibrated sensitivity to the layers of packaging that surround us so constantly that we don’t even register them anymore.

In the show’s program – which is, fittingly, only available via a QR code – creator Robin Frohardt explains that the show was born in 2015, “after watching someone bag and double bag all my groceries that were already bags inside of bags inside of boxes. I wanted to highlight the absurd amount of packaging we are using and throwing away by making something even more absurd: a grocery store that only sold packaging.”

But the packaging in TPBS are fashioned to resemble typical grocery store fare: produce, seafood, bakery desserts, flowers, and salads, as well as boxes of familiar-with-a-twist items like Caps N’ Such cereal, Straws (instead of Stroh’s) ice cream, Bitz of Plastic Crap. 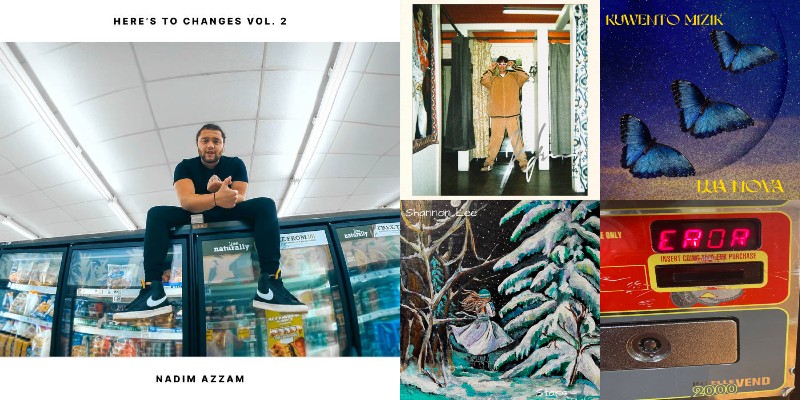 (Re)Introducing Djangophonique: Andrew Brown and Co. are putting a modern spin on a jazz tradition 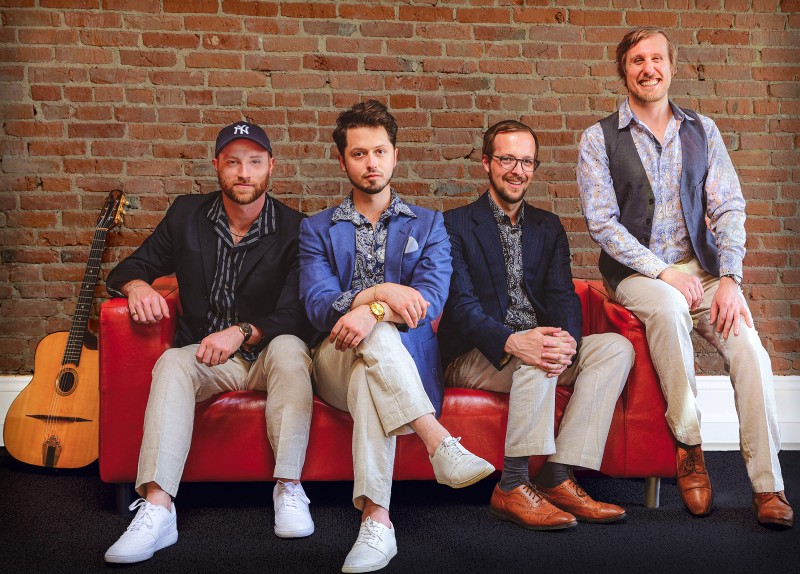 Brown is the band leader and lead guitarist for Djangophonique, the crisp Ann Arbor-based quartet that’s made a name for itself reveling in—and updating—the 1930s and 1940s music known as “gypsy jazz,” or jazz manouche. It's a sound primarily associated with the French-Romani guitarist Django Reinhardt, but Djangophonique applies the style to a range of genres, from country music to swing.

In 2020, Djangophonique released a live EP, Jazz Du Jour, some of which was recorded at the Blue Llama Jazz Club, but it came out just before the pandemic began. “That kind of put things on pause for a while,” Brown says.

But the band regrouped and last summer issued its first full-length album, Introducing Djangophonique, which garnered the quartet more and more attention. The group snagged some high-profile gigs, too, including the bluegrass-based Wheatland Music Festival, the Detroit Jazz Festival, and Ann Arbor's Top of the Park. While Djangophonique performs all over the area, its current home base is Ann Arbor's new North Star Lounge, where Brown is the creative director and the group has a residency most Wednesdays.

Selina Thompson's “salt: dispersed” is a powerful document of her monologue retracing the transatlantic slave route forced on her ancestors 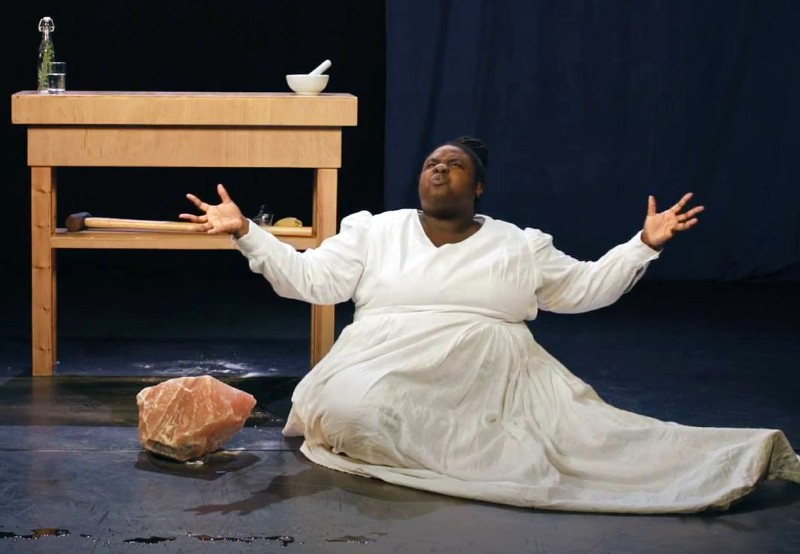 Selina Thompson's monologue salt and its filmed adaptation salt: dispersed document her story of taking a cargo ship across the ocean to retrace the journey of her enslaved ancestors. Photo courtesy of UMS.

In 2016, Selina Thompson, an interdisciplinary artist based in Birmingham, England, went on a journey to retrace the path of her ancestors. That path was that of the transatlantic slave trade.

The writer and performer recounts her trip in salt, a monologue she first performed in 2017, and now in salt: dispersed, the film adaptation of her stage presentation. UMS is streaming the film for free through February 13 as part of its Renegade Festival's No Safety Net series, which focuses on theater and art installations.

Thompson's mission started in the U.K., boarding a cargo ship with another Black female artist, and discovering a story so powerful it takes the air out of your lungs. 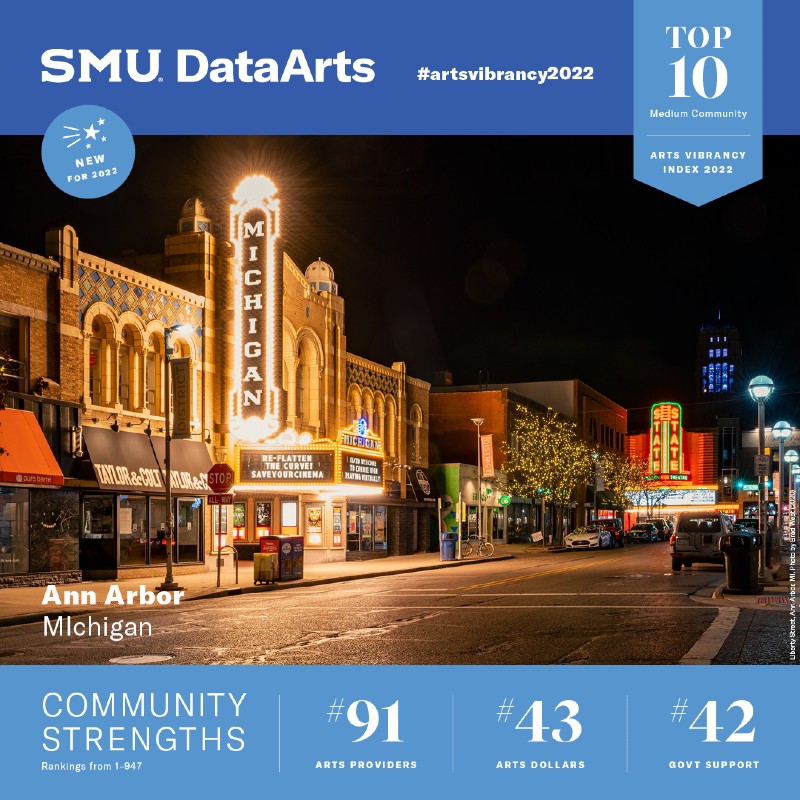 Ann Arbor continually ranks as one of the nation's top cities. This time it's named a Top-10 arts-vibrant medium-sized city. Photo taken from WEMU-FM 89.1's website.

Ann Arbor always seems to lead the pack when it comes to being a Top 10 city—best college town, place to raise a family, city for retirement, most educated city—you name it.

And whether it’s livability, real estate, visitor bureau, college sports, or academic rankings, we love being told that where we live is the best.

We can add another gold star to the city’s list of accolades: a new report has named Ann Arbor as one of the 10 most arts-vibrant medium-sized cities in the nation.