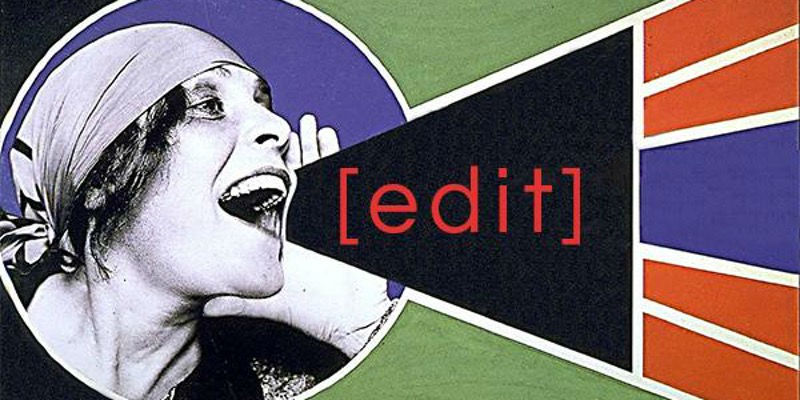 There will be no shouting at the Art + Feminism Wikipedia Edit-a-thon (because it's being held in a library, shhhh).

Women comprise about 51% of the country’s population. But according to the Wikimedia Foundation, they make up less than 13% of Wikipedia's contributors.

Fortunately, some folks aim to change that.

On Saturday, March 11, the University of Michigan Library, in conjunction with UMMA and the Ann Arbor District Library, will present the Art + Feminism Wikipedia Edit-a-thon from 12-5 pm at the Shapiro Design Lab in the Shapiro Undergraduate Library. The event started in 2014 at the Museum of Modern Art in New York City and has grown to include over 175 satellite locations.

Ann Arbor organizer Meghan Sitar stressed the need for women-focused editing: “After Wikimedia reported that less than 10% of contributors identified as female, Wikipedia set a goal of increasing that number to 25% by 2015. That didn’t seem to happen, so what you have is a gender bias in what is covered."

Men and women really do see the world through disparate points of view, and those divergences show up in Wikipedia entries.

Wild Swan Theater's family concert truly is "An Afternoon of Ann Arbor’s Best" -- and its plays are pretty fun, too 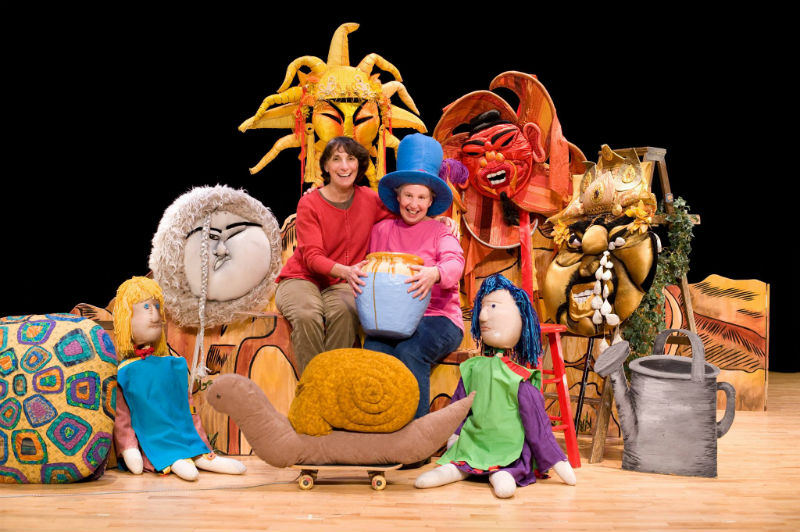 Wild Swan Theater's Hilary Cohen and Sandy Ryder are all propped up.

Sandy Ryder represents some of the best things about Ann Arbor. She's someone who came to town for school, never left, and then went on to create businesses and good works that she has generously shared with the community for decades.

After graduating from the University of Michigan with a degree in theater, Ryder taught, worked as a clown and a mime, and did improv with a children’s theater group. In 1979, she started Say Cheese Cheesecakes bakery (which closed in 2006 under different owners). Then in 1980, she cofounded Wild Swan Theater with Hilary Cohen.

Over the past 27 years, Wild Swan has distinguished itself as a place for all people, especially children with disabilities.

“My favorite thing is to have everything accessible -- workshops, traveling shows, everything," Ryder said. "We have ASL shadowed into the show, kids with visual impairments can come to a touch tour on stage. Everyone can share the experience together, everyone can enjoy the play.” 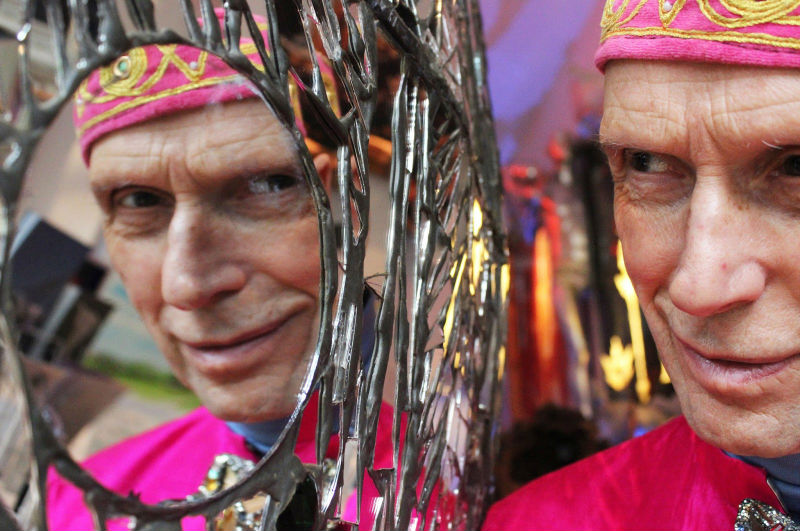 Artist Andrew Logan is probably best known as the founder, organizer, host, and hostess (he wears a costume split down the middle) of the Alternative Miss World, a "surreal art event for all-round family entertainment" he started 45 years ago in London.

Since then, he and a team of volunteers, including longtime partner Michael Davis, have staged a dozen more events for contestants of "any species, any size" competing in a dog-show-and-TV-beauty-pageant inspired dress-up party of daywear, swimwear, and eveningwear judged on "poise, personality, and originality." This longstanding celebration of transformation, imagination, and adult silliness is well-documented in the highly entertaining 2011 film The British Guide to Showing Off.

Some contestants -- many of whom are Logan's friends and family -- return year after year. Better known participants, serving as contestants or judges, have included film director Derek Jarman, artist Grayson Perry, and musician Brian Eno.

Logan is also a prolific visual artist who transforms metals, plaster, glass, and thrift-store finds into objects of "happiness and joy" in his U.K. studio with blue-collar dedication and eccentric flair. His works include large commissioned monuments, portraits of close friends, and wearable sculptures we might call jewelry. In the 1990s, he set up a small permanent display of his work in a remote part of Wales.

On Thursday, March 9, Logan will speak on his artistic adventure, the Alternative Miss World, and his "little museum" at the Michigan Theater as part of the Penny Stamps Distinguished Speaker Series.

"Giselle" is a demanding work for any dancer, but Ballet Chelsea’s students are thriving in it 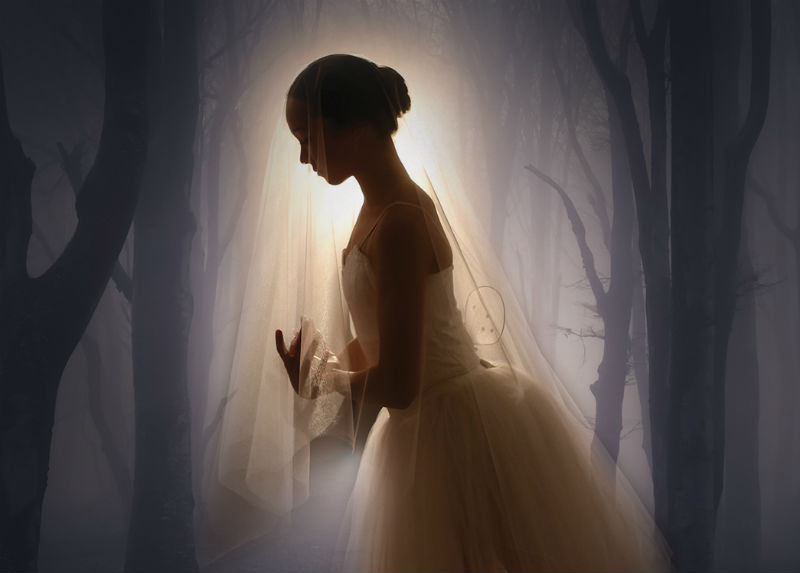 Lauren Yordanich is one of Ballet Chelsea's young dancers tasked with tackling the difficult Giselle. Photo by Monique Coffman.

Because of the weight of its subject matter and the demands of its production, Giselle is seldom tackled in student performance. Yet, here is Ballet Chelsea, a relatively new pre-professional company, mounting a full-length Giselle on March 11 and 12 at the CHS Performing Arts Complex.

Giselle is serious business -- and I mean that in a couple of ways.

First, there’s the matter of its plot. Giselle, a young peasant girl, falls in love with Albrecht, whom she meets when his hunting party passes near her village. He promises to marry her, but before Act I is over she has learned the extent of his deception: he is not just some hunter, he is a duke, and furthermore, he is already betrothed to Bathilde. Giselle goes mad and dies of a broken heart -- both literal and figurative (the idea that she has a weak heart and should not dance so much was planted early in the act).

In Act II, Giselle has become a Wili, the spirit of a young woman jilted at the altar. She is not alone; there’s a whole gang of Wilis and they are out for revenge on the men who betrayed them. Their queen orders Giselle to dance with Albrecht until he dies of exhaustion. Instead, Giselle stays with him until the dawn, when Wilis lose their power, thus saving his life. She returns to the grave and he, presumably, to a life of guilt and remorse.

So the story is a far cry from the fluffy stuff of, say, The Nutcracker. Furthermore, it is a formidable production to tackle. 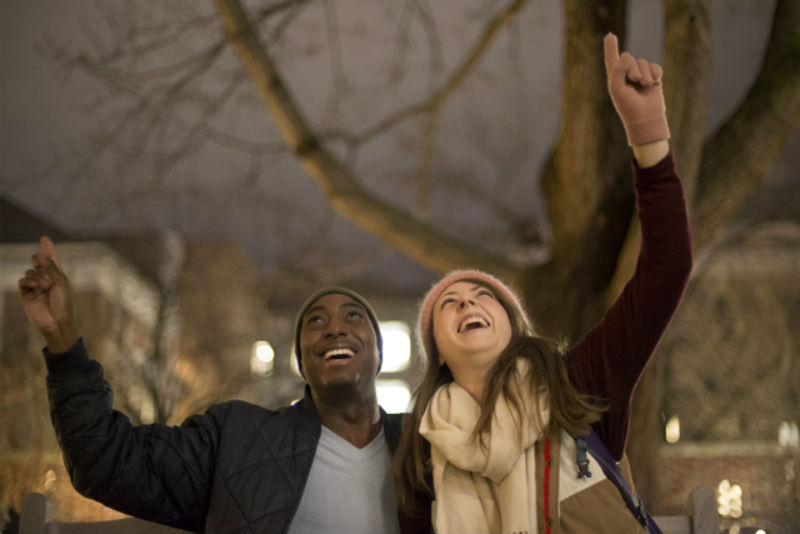 "Look, up in the sky, it's one ofAlmost, Maine's vignette's!"

John Cariani’s Almost, Maine is set in a fictional town so named because it’s so far north that it’s almost in Canada. It’s distant from the urban chatter of Boston or Montreal, but that physical distance also suggests the emotional distance that the play’s characters have to bridge.

“Distance is a big issue in the play,” said Elizabeth Docel, who plays two parts in the production. “The town is distant from everywhere and the play is about the distance between people.”

The Ann Arbor Civic Theater is presenting Cariani’s play March 9-12 at the Arthur Miller Theatre. It’s a play that has won wide support at regional and school theaters for its mix of comedy, drama, and a little magic realism.

“When I first read the play, it was so different from what I usually do,” said director Kat Walsh. “I usually do Shakespeare and works centering on social justice, and I found this play simple, sweet, and quirky.”

As she looked deeper into the play she also found a running theme. 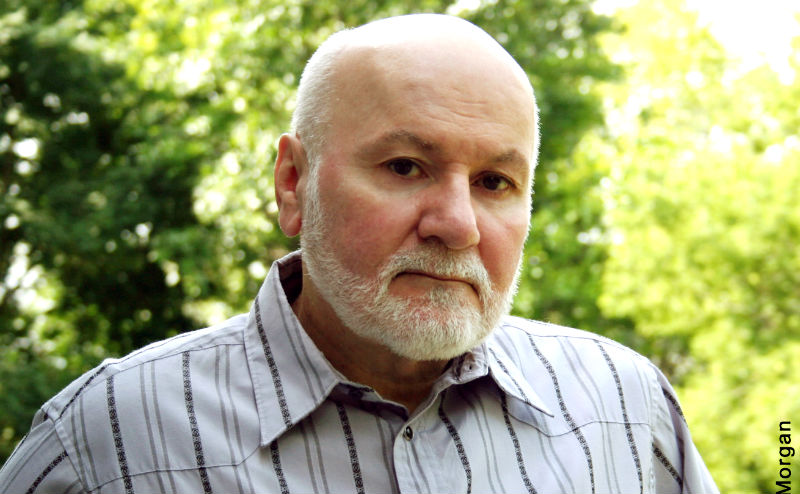 It was a dark and stormy night as the attendees huddled in the library basement to hear three mystery writers talk about their new books. As the first author began to speak, thunder crashed, the lights went out, and a scuffle broke out in the dark. When the lights returned, the entire audience was kidnapped!

OK, I should probably keep my day job and leave the mystery writing to the professionals. Lucky for us, Michigan is the birthplace of some of the best mystery writers in the country and three of them -- Loren Estleman, Doug Allyn, and Laura Joh Rowland -- are appearing at the Ann Arbor District Library's Downtown branch on Friday, March 3.

Stage lights shine brightly on the eager performers in Encore Jr.’s "... Once Upon a Mattress" 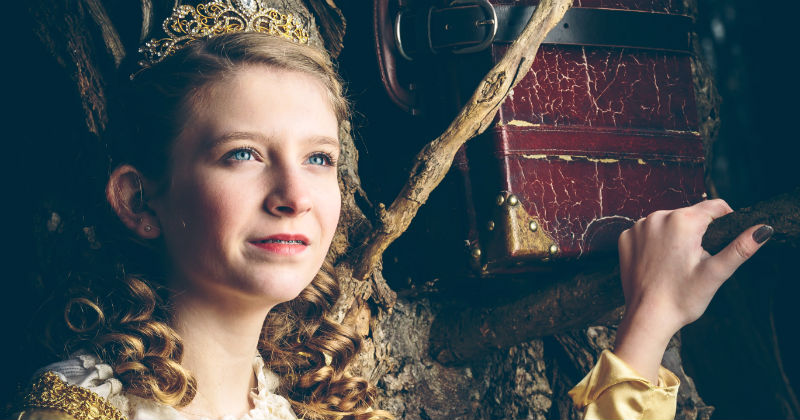 Kylie Scarpace is Princess Winnifred the Woebegone in "...Once Upon a Mattress." Photo Courtesy of Michele Anliker.

It’s six days before opening night and a group of young singers stand around the lobby of the Encore Musical Theatre in Dexter listening intently to musical director Cheryl VanDuzen lead them carefully through an ensemble number from Once Upon a Mattress.

Inside the theater, three actors are working on blocking a bit of stage business, getting used to a set that only became available a couple days before. It will be an intense few days for the young performers in preparation for a March 3 opening night.

For many stars of stage, movies, and television it was in theaters like this that a love of acting began -- in acting camps and after school programs. Thalia Schramm is casting and program director for Encore and directs many adult shows for the company and is the director of the youth theater production. She had worked as a camp counselor up north and “loved working with kids.”

Last year Encore started a winter youth program with a production of Seussical the Musical. The program is open to children up to 18 years old. This year 31 students are participating, ages 7 to 16. 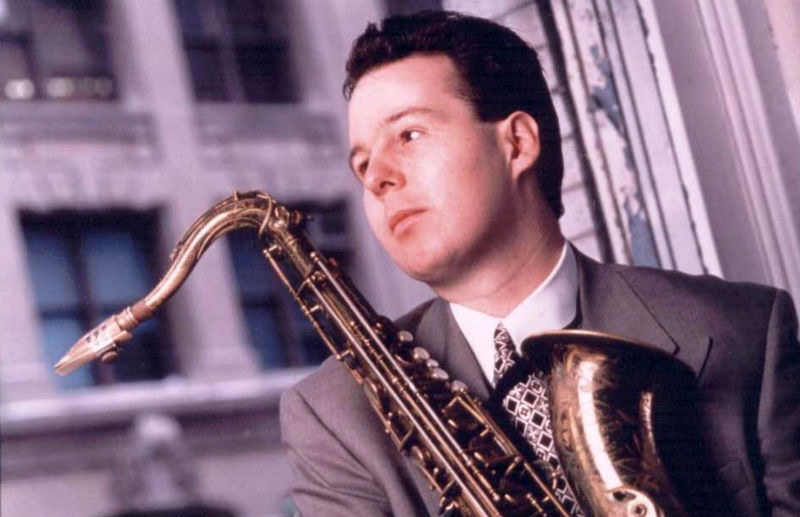 For Harry Allen, it don't mean a thing if you can't look out a window and dream about swing.

When Harry Allen was a sideman for drummer Oliver Jackson on long European tours, Jackson introduced the up-and-coming tenor saxophonist to the local promoter in every city they played. “He would say, ‘Remember this name, you’re going to want him,’” Allen recalls. Thirty years later, some of the same people book Allen regularly.

Now an internationally acclaimed jazz artist, Harry Allen swings into town with his quartet to play the Kerrytown Concert House on Wednesday, March 1. They will perform audience favorites from the Great American Songbook as well as a few new songs Allen recently wrote. Joining him on this date are Chicago-based guitarist Andy Brown and Ann Arbor veterans Paul Keller, bass, and Pete Siers, drums.

After graduating college and spending a year abroad in Ghana, Kahil El'Zabar came home to Chicago excited to tell his dad what he wanted to do with his life.

"I’m gonna play in a badass band," El'Zabar recalled telling him. "No bass, no piano, no guitar, no chromatic chordal instrument to set the tonic sensibility of the music."

His new vision called for a tonal center set by the "various rhythmic impulses" and "harmonic syntax of the music," African influences, and "urban contemporary expression" from his own experience. 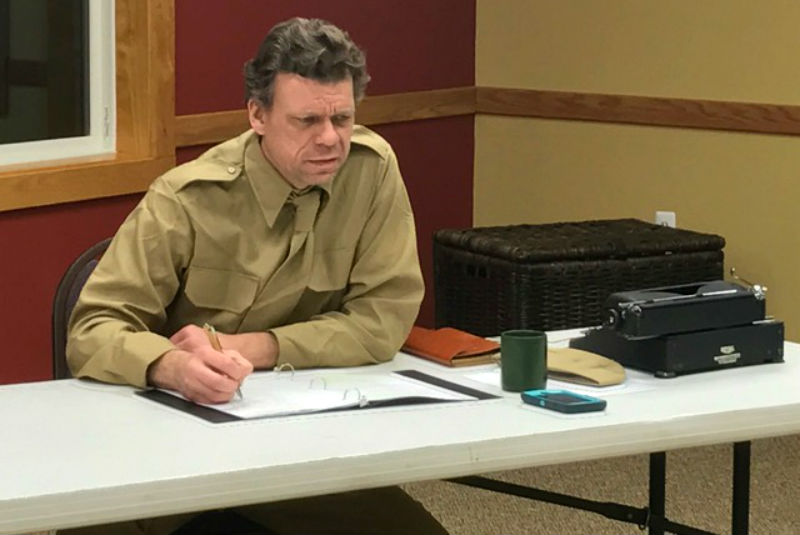